“That? That’s just a picture of Mary,” Sister Antoinette said. “That picture can’t help you, but she will, always.”

Odd, what stays with you even from early childhood. A particular moment: A second-grade teacher’s voice, the silver dust-motes swirling in a sharp, specific blade of sunshine, a dawning astonishment that you — or what you called you — were a being, and a being who saw, a being forever seeing and being seen. What you could see of Mary, and she of you, dumbfounded at your classroom desk. All of that stays, at least latently, and resurges from time to time.

The picture, the woman, what we can see of her and she of us are wonderfully resurgent in Advent’s mainstream, December 12, on the feast of Our Lady of Guadalupe. The feast this year coincides with Gaudete Sunday, the third of Advent, and its celebration will be modulated accordingly, but it ought to be celebrated all the same. 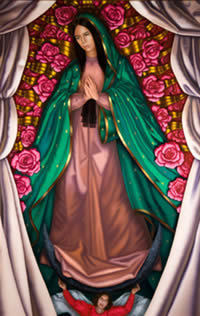 To begin with, there this gleaming image itself: A conspicuously pregnant mestitza teenager, rendered in lavish, even gaudy colors, regally clothed and adorned in accordance with Christian, Aztec, and perhaps even pre-Aztec symbols. Appearing mysteriously or miraculously in 16th century Mexico on the cloak of Juan Diego, an Indian peasant who had been praying at the time on the hill of Tepeyac, the image reminded many of the indigenous people of the mother-goddess Tonantzin, who brought them corn harvests and healthy children.

Conquering Spaniards and recently baptized locals saw the Woman Clothed with the Sun described in the book of Revelation. Whether or not these understandings were contradictory, there was general and delighted agreement that the subject of the image spoke Nahuatl, the local language. There’s something approaching the preposterous about it all, as, indeed, there is about the Incarnation it magnifies. That God is present in his creation is interesting, all right, but that God is a man is hard to take. As those who pray to this woman have put it: “He whom the entire universe could not contain was contained within your womb!”

Then there is the image’s ubiquity: It shows up on votive lights you can buy in the ethnic food section of your supermarket, and on bumper stickers which emblazon pachuco SUV’s, and on advertising circulars lying around laundromats and even on jailhouse tattoos.

Years ago, during the civil war in El Salvador, I was speaking with an earnest, fatuously doctrinaire Marxist guerilla officer when I noticed that the wooden shoulder stock of his AK47 was decorated with an elaborately carved medallion of Our Lady of Guadalupe. Had he carved it? Did he pray to her? Too shy to pursue the subject at the time, I’ve wondered about it ever since, and prayed for him from time to time before her image elsewhere.

The image’s ubiquity wonderfully extends to Notre Dame’s campus in a western apsidal chapel of the Basilica of the Sacred Heart, where a magnificent rendition painted by Maria Tomasula, the Michael P. Grace Professor of Art, was installed two years ago.

A fascinating feature of Tomasula’s image is Mary’s face. As in the traditional image, the Virgin’s demurely contemplative gaze falls to her right and the viewer’s left, but in this version there is an unmistakable particularity to the eyes and their countenance. This is also noticeable in the face of the angel beneath Mary’s feet, arms upraised in adulation. For both faces, Tomasula’s teenage daughters served as models, and as seems theologically appropriate for so famous an icon of Marian devotion, this is an impressive instance of a mother and her children doing well by one another.

Another careful departure from the traditional image can be seen in Tomasula’s sea of scarlet roses that roils like volcanic lava behind Mary’s figure, recalling the roses which had grown through rocks on the hill at Tepeyac, and which the Nahuatl-speaking young lady of his vision had bid Juan Diego gather up in his tilma before she left her image there. Recalling the sunburst of the tilma’s image, Tomasula has golden bands coiling through the nearly explosive roses, a futile metallic cordage to bind a wild and preternatural arrangement of flower and flame, reflecting a harsh and brilliant light
.
It’s not difficult to imagine Athena emerging from just such numinous light to accost Odysseus, giving that ancient hero the heart and courage he would need to contend with and prevail over the perils of his homecoming. But Athena is merely a goddess. This pregnant Mesoamerican teenager, shown here so wonderfully emerging from the rock, flower, flesh and blood of our own world is already God’s mother.

Ours, too, if we but consent to the adoption.