We bought our first house together this year, he and I, a 100-year-old Colonial in a neighborhood on the southwest side of the city. It wasn’t love at first sight. For starters, the day of the open house there was an ancient treadmill in the middle of the dining room, a lot of pink ceramic tile a-la-1970s in the bathroom and wooden paneling everywhere. The floors were in terrible shape, and we laughed about the overgrown yard with the dead sticks in the back corner of the lot. We talked about how we’d rip much of it out come spring, once the snow melted and the dust of moving settled. But the house had good bones and a good location, and the size of the yard was really unheard of for our part of the city. I was five months pregnant with our second child and we were very quickly outgrowing our one-bedroom rental. It has a lot of potential, our realtor told us. We could make this work, I told myself. We could make it beautiful. It could be beautiful, our family’s unfolding story, lived out between these walls. 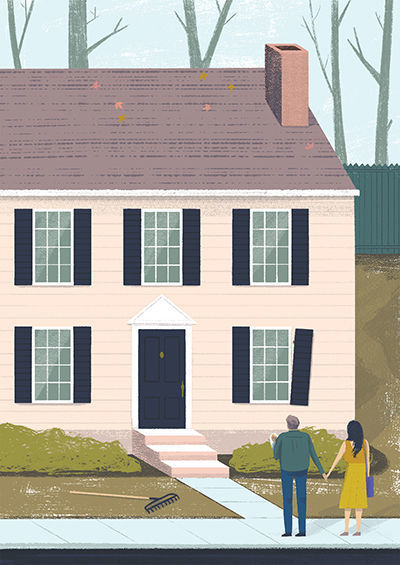 So we took a leap and wrote the biggest check of our lives for the down payment, and we closed mid-December and got to work. We painted, we cleaned and we had the floors redone. Friends offered to watch our toddler so we could finish packing, and we spent hours peeling wallpaper off walls, armed with steamers and scrapers and buckets of hot soapy water. My mom came up to help, and my aunt and uncle visited too. They laughed the day away as they painted the room our toddler would move into, helping create a space for her to feel at home, the way I imagine my mom did for me once when I was little.

We moved in on New Year’s Eve, and I woke up early the next day, that first day of the year, and watched the sun rise out the window of the room that would become the new baby’s nursery. The clear, cold sky filled with pinks and oranges, and I felt the baby squirm and wiggle inside of me. Later that day I watched my husband take our daughter out to play in the yard, and I smiled and hoped it would be beautiful, this story of ours, the one we would live out here, the one that started so many years before but now had found a new incarnation in this space, our daily dyings and risings lived out, all between these walls.

I get it, now, the desire to lay roots for your family, to have a physical place that can hold, in some way, all the being and becoming of your days and years together. In some ways, it’s a funny thing, making our own story here, in a place that held someone else’s story for so long. I wonder about them often, those who lived here before us — what legacy they left here, what kind of love and heartache, what particular flavor of laughter and celebration and forgiveness they knew between these walls. We learned pieces of it as we moved toward closing — that it was his childhood home, and she grew up just around the corner; that they played here together as children, long before they ever became lovers. They told us that they raised their own three kids here, and then they divorced, but were still on good terms. That she used to love to tend the garden, but then her sister got sick and she couldn’t spend hours there anymore, kneeling down in the soil to tend to the plants and the flowers, a straw hat keeping sun off her shoulders, a shovel in her hand. That she was moving to a condo, and he to who-knows-where, their own season of raising tinies and kicking soccer balls in the yard moving further and further behind them, like a scene in a rearview mirror getting smaller and smaller until it becomes just a tiny dot on the horizon.

There are other pieces of their story I’ve gleaned since we moved in, pieces of them that live between the walls, the bones of the house itself the keepers of their memories, even now that they are gone. We found a large patch of black paint behind one of the radiators as we were painting our toddler’s room a lovely pale shade of gray, and I laughed, imagining what angsty teenager had once called this room home — a refuge, perhaps, of music and philosophy and poetry, a space of her own, free from the trials and challenges of those tumultuous years.  In the closet, she had scribbled a Thoreau quote in red Sharpie. “Thank God! They cannot cut down the clouds!” Beside it, on the cracked plaster wall, more marks in pencil: “LC ♥ JM.” Another one read “LC ♥ MV, 2009”, but the whole thing was later crossed out with “LOL, 2013” written next to it, so I can only surmise that it didn’t work out so well between those two.

My own daughter is only 2, but I wonder if she’ll scribble hearts on the wall of the closet one day, too.

And there were other surprises.

I took my daughter out in the yard one still-cold day in March, and the sight of crocuses emerging through the cold, hard ground took my breath away. I had no idea what was planted here, I thought. We’d never seen the house in bloom, and the spring and summer were an all-you-can-eat buffet of surprises. First the crocuses, then the lilac trees. In July, what we’d thought was simply dead overgrowth turned out to be a sizeable patch of wild raspberries, and our toddler spent the month gleefully sneaking them into her mouth, her face and hands and clothes constantly stained with their juices, tangible signs of summer’s abundance. When did they plant these? I wondered, and, Did their kids love them as much as ours do? and I thought, How proud I was, how arrogant, to not see the beauty that was already before me, right here waiting to bloom before my very eyes.

Because when we moved in I thought we’ll make it beautiful but what I’ve learned since is that it already was, it was beautiful with their stories and their memories and their tears, their hopes and disappointments and regrets, with the seeds they planted whose harvest we enjoy today. We’ll make it our own type of beautiful, of course, with our own stories — with the scratches in the wood floor where our babies have pushed walkers and dropped toys, with the patches of coral paint that hide behind the radiator in the nursery that’s now painted mint, signs of a very-pregnant-me who couldn’t make up her mind about the right color walls for the tiny babe we brought home here one beautiful day in April.

It’s ours now, I know, and of course their marks will gradually grow more and more faint as it becomes more and more our own. We’ll eventually fix the cracks in the closet and we’ll probably paint over the Thoreau quote and the “LC ♥ MV LOL” scrawled on the wall in red Sharpie. We’ll keep taking down paneling and wallpaper, and we’ll plant some new things in the yard. And with any luck, some years from now when a young family walks in and wants to spend their own meager life savings to call it theirs, we’ll look at them and smile and tell them we made it beautiful, that it was beautiful — the story we lived between these walls.

This essay by Erin Ramsey-Tooher was one of four second-place winners in this magazine’s 2017 Young Alumni Essay Contest. Ramsey-Tooher is a social worker at Beth Israel Deaconess Medical Center in Boston, where she and her husband, Peter Tooher ’08, and their two daughters moved in to their 100-year-old house last year.