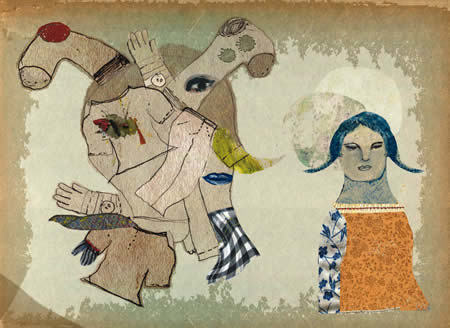 A monster sleeps in my basement. Curled up on the secondhand couch in the playroom is a living, breathing, snorting, snuffling, growing pile of washed but unfolded laundry. The pile is poised to roll over the edge of the couch and start devouring all the toys in its path as it makes its way up the stairs and on to the floor in my children’s bedrooms, where it will envelop the dog and dance on the Legos and dolls.

After rolling around the bedroom floors, the creature will make its way down the laundry chute, repeating the gruesome cycle over and over and over again. Nothing short of an army of servants I can’t afford could beat this monster down, keep it living in my children’s dresser drawers, folded neatly where it belongs, instead of doing as it pleases and taking over the entire house.

The laundry monster moved in after my children were born and started to grow as we did. First it was mostly itty-bitty baby clothes, then it was princess dresses, and now we’ve added hockey jerseys to the mix. Some days I almost get it off the couch and into the children’s drawers where it’s supposed to live, but then my kids come home from school. They take off their chocolate-milk-splashed uniforms, put on their play clothes and step in things they shouldn’t, change into soccer gear which gets muddy, then put on pajamas and princess nightgowns that get covered in, not their own, but their siblings’ toothpaste spit. All of it goes in the laundry chute, and then nothing is put away anymore. It’s just in a big pile of dirty laundry I washed yesterday.

Once, the monster managed to kill the washing machine. During the days we waited for repair, the monster grew to a prehistoric size, a colossal laundryosaurus covering the back half of the basement floor. The stink of all that monster drool, toothpaste spit and hockey stuff was shocking.

In the midst of getting the washer fixed, I could no longer walk across the basement or deal with the stench, so I loaded the laundry into the minivan and we went to a Laundromat together. We sat there together on a Sunday night, by ourselves, reading outdated magazines, enjoying the quiet hum of an industrial-sized washer, drinking a Diet Coke. And it was kind of nice, being there, the laundry and me.

Eventually the repair guy managed to fix the washing machine. I went back to washing the laundry at home, where it still ends up on the playroom couch, mocking me and covering up the TV remote with its bulk.

I know that when my children are teenagers I’ll get exasperated and start flinging phrases, trying to beat back the colossus a bit: “You know, you should be doing your own laundry!” “Soon enough you’ll be out of here, and you’ll have to do this for yourself!” And I know my anger won’t accomplish anything but make me sound more like the mother they want to get away from.

Sometimes when the laundry monster is there sleeping quietly on the couch, I’ll poke at it and mouth off. “Well I live here, too, you know, and sometimes I want to sit on the couch, so you can just move over.” Then I’ll move it around a bit and throw some of its extremities on the floor, just so I can sit down.

If it’s fluffy things like duvets I’ve washed from a little girl’s accident the night before, I’ll just snuggle down into all that clean laundry. I’ll put my head on a tutu or a teddy bear that needed dog slobber washed out of it. Sometimes if I’m lying on top of the clean laundry and the kids and I are watching a movie for movie night, I’ll think about how once I’ve managed to find the TV remote and the beasty is asleep, snoring peacefully, I don’t really mind having a laundry monster in my basement.

As long as I don’t get uptight about having the children’s laundry cleaned and folded and put neatly in their drawers, the laundry monster and I do just fine, curled up here together on the couch in the playroom. Maybe that’s just what laundry monsters do: They move in when the children do, and eventually, when there is no more dirty laundry to feed it, the monster will leave.

I’ll be here in my house with all the clean clothes folded and put away in the dresser drawers and all the towels and linens in the closet, where they belong. I won’t have anyone to go with me to the Laundromat on Sunday nights and there won’t be any more tutus to snuggle on the playroom couch.

Maraya Steadman, who lives in a Chicago suburb, is a stay-at-home mother of three children. See her biweekly “The Playroom” column at magazine.nd.edu and at her website, marayasteadman.com. She can be reached at maraya@steadmans.org.