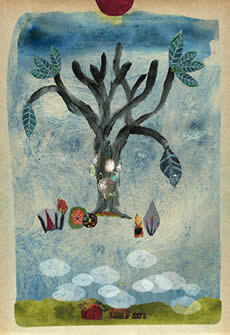 Not long ago, a friend emailed me from Dublin with an unusual request. He and his siblings were finalizing a two-sided bookmark-sized memorial card for their parents, who had passed away within several years of each other, and wanted to include a couple of poems on the card to express their loss. They hoped to go to the printer the next morning but were not quite satisfied with the poems they had chosen. So my friend asked me if, on obviously short notice, I could make a recommendation . . . or two.

I had met my friend’s mother once, briefly, but his father never. With little of a personal nature to guide me, and with no time to spare, I almost gave up the assignment before I had even begun. What sort of poem would fit an occasion that I imagined as neither strictly “religious” nor strictly “secular”?

The open-ended answer to that question came to me quickly, in the form of a recollection by Irish poet (and Nobel laureate) Seamus Heaney, in Section XI of his Station Island sequence, of the penance once assigned to him by a confessor: “Read poems as prayers,” the monk instructed him.

That prompted me to recall an observation made about Shakespeare’s sonnets by Harvard professor Helen Vendler: “The act of the lyric is to offer its reader a script to say.” This is equally applicable to a poet like Heaney with his inclination toward lyric poetry — poems both precise and evocative in their use of language to reflect or refract the poet’s personal experience or personal observations.

With that principle in mind, I suddenly had a starting point. And with Heaney also in mind, I had a direction to follow. I knew he had written an emotive sequence of eight sonnets after his mother died in 1984, so his volume The Haw Lantern is where I looked first. I was tempted to send to my friend the last of those sonnets, a poem in which the poet recounts how his departed mother’s absence becomes in his imagination a paradoxical presence, like the space, “Utterly empty, utterly a source,” left after a decades-old chestnut tree had been cut from the hedge of the Heaney family farm in Northern Ireland: “Its heft and hush became a bright nowhere, / A soul ramifying and forever / Silent, beyond silence listened for.”

Heaney has admitted that the death of his parents sparked in him a particular alertness to the metaphysical dimension of human experience — the marvelous, the mysterious — and I knew from having lost my own mother not long before my friend lost his that this poem spoke to that potent mixture of ending and beginning, of void and possibility, which new bereavement can generate.

Ultimately, though, I decided that poem was too grounded in the specific terrain of Heaney’s boyhood and thus not quite right for the occasion. So I turned the page. Literally. And then one more page. And what I came upon was a poem by Heaney that transported me back to the summer of 1998 when my wife and I took our three daughters on “the grand tour” of Ireland, which included a stop in northern County Donegal, in the vicinity of legendary Doon Rock, the inauguration site during the Middle Ages for chieftains of the powerful O’Donnell clan. There, in an isolated vale, we found ourselves standing in silent wonder before what is known as a “wishing tree.”

A solitary weather-gnarled hawthorn, its knuckly tangle of black branches raking at the wind like razor-tipped fingers, this tree — like others spotted throughout Ireland — was obviously a longstanding site of supplication. Associated with “the little people” (the fairies) in Irish folklore, the hawthorn is also linked by some believers with Christ’s crown of thorns. Reflecting the essential nature of folk belief in Ireland — equal parts religious and superstitious, Christian and pagan — certain of these trees have become invested with a vague power that leads visitors to leave behind some token of their having stopped to implore divine intercession on some personal matter: health, wealth, marriage, fertility.

Adorned with coins and medallions wedged or hammered into the bark, and with badges and devotional scapulars, ticket stubs, photographs, prayer cards and handwritten notes pinned to its trunk and limbs, the wishing tree we visited was a living emblem of the very small gap between hope and despair that can exist in the human spirit.

How apt, then, that in the wake of his mother’s death, Seamus Heaney should inscribe her nurturing figure in terms of such a homey marker in both the physical landscape of the Irish countryside and the emotional landscape of loss and longing. As soon as I turned the page to “The Wishing Tree,” I knew it was the perfect choice to send to my friend to help memorialize his mother. Outside the home, Irish society is traditionally patriarchal, but in the domestic sphere the mother is the centripetal force that holds the world together. Heaney’s poem registers just that force in transforming the image of a literal tree which had died recently into the idea of a maternal spirit whose transcendence is cast in terms of the Ascension of Christ’s mother.

And it does so with relative simplicity, both formal and stylistic. Heaney has coined, famously, the phrase “the music of what happens” to describe what lyric poetry attempts to capture and express. He has also said: “One of the first functions of a poem, after all, is to satisfy a need in the poet. The achievement of a sufficient form and the release of a self-given music have a justifying effect within his life.” And “The Wishing Tree” is clearly the sort of poem that can “offer its reader a script to say”:

I thought of her as the wishing tree that died
And saw it lifted, root and branch, to heaven,
Trailing a shower of all that had been driven

Need by need into its hale
Sap-wood and bark: coin and pin and nail
Came streaming from it like a comet-tail

New-minted and dissolved. I had a vision
Of an airy branch-head rising through damp cloud,
Of turned-up faces where the tree had stood.

But did it offer even more? I have never asked my friend exactly how he and his family engaged with this poem individually or collectively. Did someone read the poem aloud? Did they read it aloud together? Which leaves me to wonder: Might they have read “The Wishing Tree” in the spirit instructed by Heaney’s long-ago confessor — might they have read it as a prayer?

Obviously the poem is not a prayer in the conventional sense. Yet, while neither a supplication nor an invocation, it still evokes those conventions through the vaguely religious potency of the wishing tree. Also, as a poem experienced communally by my friend’s family, it corresponds inherently with a central notion expressed by American poet Mary Karr in her essay “Facing Altars: Poetry and Prayer.” Describing the “Eucharistic qualities” of poems she associates with her midlife conversion to Catholicism, Karr explains: “In memorizing the poems I loved, I ‘ate’ them in a way. I breathed as the poet breathed to recite the words: someone else’s suffering and passion enters your body to transform you, partly by joining you to others in a saving circle.”

In the end, however, the prayerful aspect of “The Wishing Tree” may reside in its intrinsic nature as a lyric poem — that is, in its capacity to record what William Wordsworth referred to as “emotion recollected in tranquility.” Releasing its reader-as-speaker from the immediate emotional tumult of personal loss just as conventional prayer does — through the intermediating agency of elevated feeling and refined expression — the poem-as-prayer has the capacity as well to afford what Robert Frost once described as “a momentary stay against confusion.”

In that regard, did even the very different sort of poem I proposed to commemorate my friend’s father hold similar promise? Also written by Seamus Heaney, this poem registering the death of his father in 1986 was published in his volume Seeing Things. The poem is easily identifiable as a haiku, among the simplest of poetic forms:

Dangerous pavements.
But I face the ice this year
With my father’s stick.

Here Heaney nods toward the convention associated with Japanese haiku of incorporating a seasonal reference. In fact, that reference is crucial to this poem’s potential as “prayer,” as its title, signaling a new year, also signifies a new beginning, and the father’s walking stick may thus be recognized by the reader not just as a token of remembrance but also as a totem of fortitude in the aftermath of irreversible loss.

Promoting the “Imagist” movement in Anglo-American poetry during the second decade of the 20th century, Ezra Pound explained: “An ‘Image’ is that which presents an intellectual and emotional complex in an instant of time.” In the case of haiku, this “complex” involves what is known as satori, an epiphany of sorts — a showing-forth of a resonant truth that the reader absorbs instantaneously with both the mind and the heart. That may describe precisely not only the double-edged symbolism of the walking stick but also the way such symbolism crystallizes into the same sort of salvific release that a more expansive lyric poem might afford.

When I emailed the poems to my friend, I had no conscious notion that I was sending him prayers. But at least by the evidence of how the poems appeared on the memorial card, an 8-by-3-inch slip of pasteboard my friend sent to me a month or so later, I believe they did afford some sort of prayerlike uplift. Incongruously, I thought at first, the side with a photograph of their father included the poem associated with their mother, and vice versa. Initially, I interpreted this design as a Möbius strip — a touching emblem of union and permanence if the card were given a half-twist and the ends fastened together. Eventually, I realized that the more immediate effect is that of the parents speaking to their children on each other’s behalf: the father reminding them of their mother’s enduring embodiment of hope in the face of sorrow, the mother offering them their father as an image of steadfastness and resilience.

For my part, having attended in recent years countless wakes of elderly relatives and neighbors and the parents of friends, I have accumulated a collection of conventional laminated prayer cards that I use as bookmarks. Now I have a bookmark that just may double as a prayer card.

Thomas O’Grady is director of Irish Studies and director of undergraduate Creative Writing at the University of Massachusetts Boston.