They may be rookie cops, but two newbies on the Notre Dame Security Police force bring some impressive credentials. Young and ambitious, expertly trained and laser-focused, their instincts are sharp, their reflexes agile. And when the two act on a hunch, their partners back them without question. 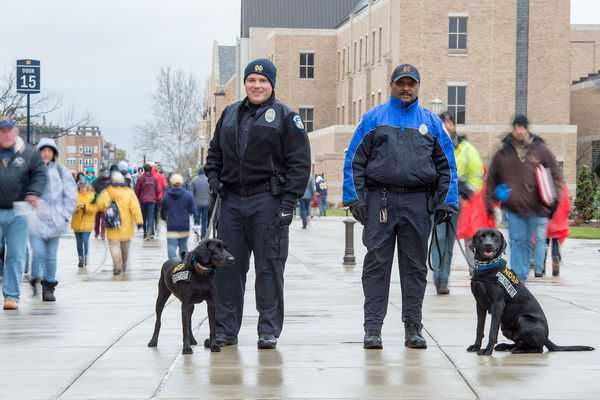 Unless they spot a squirrel. Or a ball. Or popcorn on the ground.

“Even though they’re working dogs, they’re still dogs, which means that they can get distracted, especially by squirrels or balls,” says Anthony Clark, a 27-year veteran of the NDSP who serves as one of the dog’s handlers.

Eighteen-month-old Toxi and three-year-old Skeet, two black Labrador retrievers brought onto the campus police force in September, are trained to detect explosives among crowds of people. They sniff out “airborne explosives” — those concealed on a person as opposed to buried in the ground — in a process called Vapor Wake detection.

The use of dogs on university police forces is common, but Clark and fellow officer Jarett Gilpin are two of only about 200 officers trained to handle specialized explosives dogs. “I’ve always thought it would work out well here at Notre Dame to have a K-9 force — either a drug dog, tracking dog, explosives dog or even a therapy dog,” Clark says.  “Explosives are their focus because of what’s going on in the world today. It adds an additional layer of protection.”

Since their training equips them to uncover the scent of explosives on people in large crowds, Toxi and Skeet’s work schedule reads more like a student’s social calendar: They attend pep rallies, football games, tailgates and concerts, among other popular campus gatherings.

“There are checkpoints going into events, but the dogs are trained to ‘search’ moving people and walk among the crowd,” explains Gilpin, Toxi’s handler.

Since the nature of the dogs’ detection job is non-intrusive, most people standing near them don’t realize that Toxi and Skeet are actively searching and sniffing them. In fact, Clark and Gilpin agree that the two unwittingly serve as therapy dogs for students, who routinely ask to pet them, reminding the students of canine companions from home.

Transitioning each day from beloved family pets to working dogs searching for bombs is surprisingly easy for the pair.

The two dogs work the same hours as their partners on the force: the 3 p.m. to 11 p.m. shift. “When we’re on duty, they’re on duty,” Gilpin says, “though we give them regular time off every day. If they work for 30 minutes, then they’re off for 30 minutes.”

Black Labs are born hunters whose characteristics serve Skeet and Toxi well in their roles as explosives dogs. Their job satisfaction is enviable.

“At two o’clock most days, Skeet just senses that it’s time to start getting ready for work and he goes upstairs and starts bouncing and jumping until I come up,” Clark says.

Toxi exhibits the same type of behavior when Gilpin puts on his uniform.

“She knows when it’s time to get ready for work and she loves to be busy,” Gilpin says. “When I take my bag out to my truck before we leave, she sometimes cries because she thinks I’m leaving without her.”

Prior to bringing the dogs to Notre Dame, Clark and Gilpin spent seven weeks at the dogs’ training center affiliated with Auburn University in Alabama, where they roomed with their future partners.

“It was important for us to build that bond — to become familiar with their routines, understand their training, keep the same schedules, and let them get to know us,” Clark says.

Mutual trust between dog and owner is ideal, but for service dogs, that bond is critical since their jobs often involve potentially deadly situations.

“There are so many benefits to me,” Clark says. “It’s like we communicate the message to each other: ‘You’re my guy and I’m your guy.”

“Toxi is more like a friend,” Gilpin says. “We learn together. We train together. I just want to try my best for her.”

Susan M. Guibert is executive director of media relations and communications at The University of Chicago Booth School of Business. She is the co-author of three children’s books, including The Spirit of Christmas at Notre Dame.