Obsolete. Antiquated. Not up to modern standards.

Maybe they’re right, I grumble under my breath, and immediately the ancient blue intake pipe gurgles moodily, probably sensing my momentary fickleness. I gently reopen the butterfly valve, repenting of the mental treachery. I am back in the pump room, a giant, battered wrench now in hand, whacking the screw knobs back into place over the very rusty but still very functional filter lid. The lid fits in well with the surrounding pipes and pumps and valves, and the entire pump room, really, which also on the whole is very rusty but very functional. 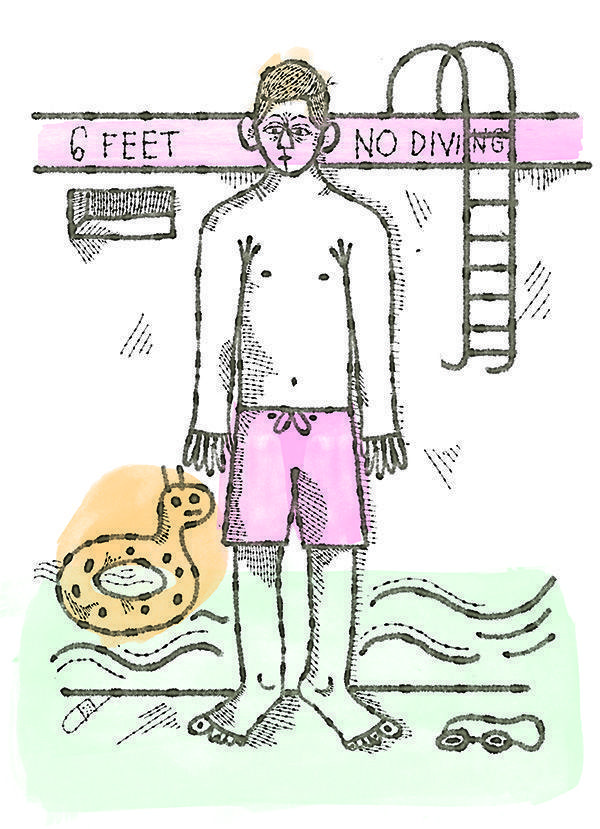 I walk back out to the deck, shaking the rust from my hands, and glance out over the blue ripples. The pool — there is another one in the city, a nice new one, but this one, of course, is The Pool — the pool is a wide, simple, T-shaped affair; no bells or whistles; 49 years old now; held together largely by love and duct tape.

And soon, it now seems, it will be replaced. Razed to the ground, dug out anew, most likely filled with splendid new play features and a lavish new pool building. An “aquatic center,” as they call them now. Somehow we pool workers had assumed it would never actually happen; sure, there have always been nebulous whispers of a faraway renovation, but we have always shrugged and assumed such a project would take too much money ever to get started. Now, what do you know: They’ve found the money.

They’ve found the money, and, if you could see me, you’d notice I’m not exactly dancing across the deck at the good news.

It is twilight now at the pool; my lifeguards and our swimmers alike have gone home for the night. As some of our more waggish lap swimmers would comment, I am home as well. True enough. The empty pool is glistening; the green hues of the surrounding fields are fading in the dusk. The rest of the park always settles down to silence at sunset, but the old pool never sleeps, her old mechanical heart pumping away straight through the night. Just hours before, a couple hundred of us were here: kids playing water volleyball, toddlers toddling for the first time in the wading pool, parents teaching their children how to dive and, of course, our regular daily influx of lap swimmers whose names and times and habits we know by heart.

They are able — all of them, from the infants to the teenagers to the great-grandparents — to enjoy themselves here every day, even despite our glaring lack of giant water slides and blaring music and elegant locker rooms. Most of these people, it’s safe to say, anchor every summer of their lives to this old pool. Perhaps that makes them just as obsolete and antiquated and not up to modern standards. But they sure don’t seem unhappy about it.

If you love them, let them go, as they say, although I think the phrase till now has been applied more to people than to pools. There’s something to it, though, which even I can admit. The new pool will surely bring in more revenue — people who eschew mere water apparently will gladly pay when that water is rushing down a huge plastic flume or coursing around a lazy river. It will certainly put the park on the regional map and restore it as a real hub of the summer culture in the city. Those of us who love the old pool should be happy for her. So they tell us.

I take a leisurely final lap to lock the place up for the night. The doors are like the people who come to swim — each with a personality. This one has to be gently nudged while turning the key; this one has to be pulled in with perfect timing as the deadbolt flips over; this one just has to be kicked, hard and repeatedly. Half a century of pool life has aged and bent and molded them each a bit differently.

Those words come to mind again: obsolete and antiquated and not up to modern standards. They are the words of important people who know much more than I do about budgets and city planning. And yet, with all due respect, I think they likely know much less than I do about the little world that springs up from nothing in this park from June through August every year. They know the kind of good that will come from the new; I know the kind of good that has gradually taken root in the old.

It’s been a busy week at the pool, and as I glance out again over the tranquil waves, I can almost see the recent scenes from the last few days replaying themselves, like lively ghosts in the empty water. In the deep end is Joell, a chubby, roguish little boy we all know, born without forearms but ferociously kicking himself to the wall to take yet another jump off the diving board. Across from him, the ladies who spend all summer floating and chatting with one another in the (severely misnamed) aqua-jog area. In the lap-lane is Bob, the lively grandfather and recent widower who brought in yet another tray of homemade brownies today for our guards; a normally ebullient man who has been a shade quieter, this being the first summer without his “little bride” since the pool has existed. And not far from me on deck, the circle of regulars crowding outside the pool office, serenading our stoic manager and his wife by surprise on their anniversary.

These and the specters of hundreds of other recurring characters fill the empty nighttime pool, characters of all types, just like those doors, from the most thoughtful to the most entertaining to the most obnoxious. We come to know their stories, their sufferings, their quirks, their kindnesses, and even which colored kickboard each one prefers to borrow from the office. All of them are ours, and we wouldn’t have them going anywhere else.

Will any of this old-fashioned charm survive when the place becomes a glitzy aquatic center? I don’t know. Much will be lost. Of course, it’s the sort of loss you just can’t communicate to a committee whose duty to the city hinges largely on balancing spreadsheets. For those of us who devote our summers to maintaining our little oasis, we would do anything to keep that oasis from becoming a circus. But we can’t deny that circuses are more profitable.

Am I too attached to the old pool? Yes. Probably. It’s becoming clear after a few decades that life is more or less one long series of separations, and I suppose it’s meant to be so — the sort of thing that keeps us from becoming too attached to people and places down here on earth. But just because some little pockets of good aren’t the eternal kind, that doesn’t stop them from being truly good. This big old pool with all its oddities seems to me as much a reflection of heaven as almost anything else this side of the Real Thing. And looking out now over the moonlight glimmering on the pool surface, it’s hard to conclude that making this place louder and brighter and newer and wilder won’t dissolve away that little reflection long before it should have faded.

Walking out of the park for the night, I turn back once more to survey the lapping ripples, and a line from a Kipling poem jumps into mind: “Watch the things you gave your life to, broken, and stoop and build ’em up with worn-out tools.” The second part is normally no problem — if there’s one thing I’ve learned from working here, it’s that anything can be fixed somehow, and besides, worn-out tools are the only kind of tools we have in the pool office. It’s the first part that will be the killer — seeing the old pool broken, buried and replaced, unrecognizable, right atop her own grave. For that there will be no quick fix, and no slow fix either, for that matter. Our faithful, rusty vice-grip, all-powerful in the realm of pool repairs, will have finally met its match. It can fix most things, but it won’t be much use in trying to restore the happy little culture, for now still thriving here, once it’s been demolished and replaced.

And so, when in a year or two I am sitting civilly on the ground, the only living thing between the bulldozer and the pool gate (“Who was that guy?” the driver will murmur when the tires stop crunching), it won’t be because new is always bad or change is always wrong. Neither is the case. It will be because some very few good things in life last as long as we let them. But they cannot be rebuilt, and we’re fools when we break them.

Will Erickson’s essay won second place in this magazine’s 2015 Young Alumni Essay Contest. The author lives in Waukesha, Wisconsin, and teaches math and Latin at Trinity Academy in Pewaukee, Wisconsin. During the summer he is the head guard at Buchner Pool in Waukesha.