Jerry McKenna’s career as a sculptor did not begin in earnest until he was in his 50s, after a distinguished 27-year Air Force career that included service in Vietnam — for which he received a Bronze Star. 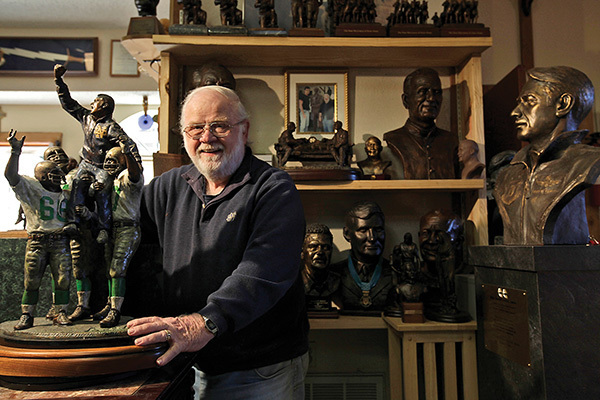 McKenna ’62 has since created acclaimed bronze busts and statues of athletic greats — such as Tony Dorsett and Lawrence Taylor for the Pro Football Hall of Fame and the championship coaches perched outside Notre Dame Stadium — as well as military, religious and political figures.

His creations may be seen as far from his large studio near San Antonio, Texas, as Canada, Ireland and Voss, Norway — where in March 2006, during a television broadcast enjoyed by as many as two million Norwegians, he unveiled his statue of Knute Rockne, 75 years to the minute after the legendary football coach’s death in a plane crash.

It’s for such work that McKenna may be considered the unofficially official sculptor of Fighting Irish athletics.

“The funny thing is I was originally a failed artist,” says McKenna, who earned a fine arts degree at Notre Dame. “In my 20s, I tried to design things like mobile homes. I just couldn’t get much work. One day I saw a billboard for the Air Force. And I would end up going off and seeing the world.”

McKenna, who rose to the rank of lieutenant colonel, held many posts in the military, including duty as the Air Force’s youngest base commander at the time — just 37 when he began his tenure at High Wycombe Air Station in England in 1975.

“As a young guy, I wondered if I could pull it off — and I did,” McKenna says. “It gave me confidence.”

The military also provided a bridge for McKenna’s career transition, beginning in 1981. Some of his earliest recognition as a sculptor came for his depictions of Air Force generals, including Henry “Hap” Arnold, Jimmy Doolittle and Billy Mitchell. He’s done hundreds of military pieces in all.

Other career highlights include the processional cross he made for Pope John Paul II’s 1987 Mass in San Antonio and The Lincoln-Douglas Debate, which memorializes the spot of the last of seven historic 1858 Senate campaign debates between the incumbent Stephen A. Douglas and his challenger, Rep. Abraham Lincoln, in Alton, Illinois.

“It was a real turning point in my career,” McKenna says of the piece, which he created in 1995. “I thought of Douglas in this very dramatic pose with a finger in the air and mouth open — and Lincoln behind him in pensive thought. I had a different approach to put energy into the lesser-known Douglas. It became one of my more well-known sculptures.”

At Notre Dame, he’s best known for his depictions of Knute Rockne, Frank Leahy, Ara Parseghian, Dan Devine and Lou Holtz around Notre Dame Stadium, of Moose Krause relaxing with a cigar on a bench outside the Joyce Center, and of the Four Horsemen standing sentry inside the Guglielmino Athletics Complex. In 2014, the NCAA named his Four Horsemen the No. 1 college football statue in the country. McKenna’s Parseghian, which recalls the coach’s triumphant ride on players’ shoulders after the 1971 Cotton Bowl win over Texas, rounds out that list at No. 5.

He accomplished so much as an artist with military-like discipline and a quest for perfection. McKenna has been known to work for as long as 20 hours straight.

“I can’t do that kind of stretch as much as I used to,” admits the 80-year-old, “but I still have my obsessive-compulsiveness showing its positives. I want to get it right.”

He begins by building a wire armature on a board or pipe and encapsulating it in clay. As he’s sculpting, he works with hundreds of tools. Mostly, he just uses his hands.

Strolling around his studio, McKenna can’t help but open up a sculpted eyelid a little more, or adjust a mouth just so. Once completed, a piece goes to nearby Stevens Art Foundry, which has cast all of McKenna’s bronzes.

For everything torso-sized or bigger, McKenna and his wife, Gail, handle the installation.

“Part of the art is making sure it’s put on the platform and put together at the venue correctly,” he says. “My wife and I drive all over in a truck, and I oversee it being put in. I’ve put in a lot of time, and I want to know that people will see what they should.”

When you’re with McKenna, you can’t help but see how much Notre Dame means to him, whether it’s in his vast sports memorabilia collection, the hood ornament on his car patterned after the Leprechaun sculpture he created for the Purcell Pavilion, or the love he wears on his ring finger.

We stop at a friend’s gold and silver exchange and McKenna jokes that maybe one of the workers at a buffing machine could polish his class ring sometime. Why not now, comes the response.

With its imperfections removed, the work of art McKenna has owned for decades seems refreshed, renewed, two letters glittering: ND.

Eric Butterman has profiled J.J. Philbin ’96 and Billy Hassell ’78 for this magazine. Contact him at ericbutterman@yahoo.com.