Jennifer Shouse slides a disc sander over a wooden slab, rubbing the surface smooth and flawless. Later, using variant grades of sandpaper, she’ll work out the board’s rough edges by hand. These are new skills for the employee who took a job at South Bend Woodworks late last year.

When she started at the shop, the resident at a local homeless shelter and mother of four hadn’t held a job for several years. “I’d been out of the workforce for so long,” says Shouse, who was offered a position the same day she interviewed for it. “It was a very sudden change.”

Initially hired to keep the shop tidy, emptying trash baskets and removing mounds of sawdust, Shouse saw a need during the company’s holiday rush and asked how she could help. Soon she was maneuvering sanders and prepping the company’s handcrafted wood pieces for finishing. The fine motor work made her hands ache. “But [I] got used to it,” she says. “I’m learning new things all the time.”

Shouse is a good example of the type of employee Woodworks founder and president Michael Lindburg ’71 hopes to attract and retain as he looks toward his company’s future. 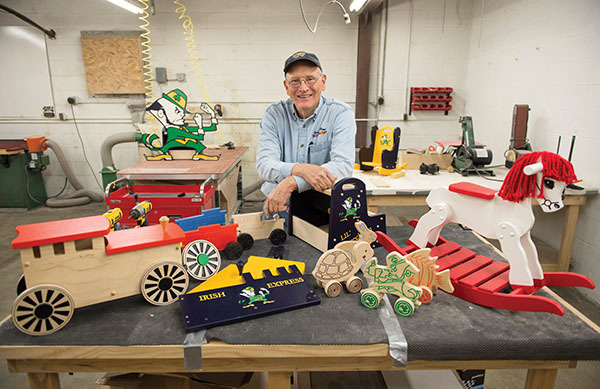 Lindburg started South Bend Woodworks in 2013. The company produces handmade wooden toys and furniture, college memorabilia and other keepsakes. He entered the market with no experience in retail sales or manufacturing or even woodworking. What he did bring to the job was expertise in growing a small business and a commitment to a social mission.

In 2002, Lindburg and a business partner purchased a start-up software company in Albany, New York. Four years later they sold the business to Xerox, having grown the company’s workforce from two employees to 125.

Lindburg and his wife, Eileen, a 1972 Saint Mary’s College graduate, decided that leaving their 25-year home in Albany and returning to South Bend would make sense. Notre Dame, they reasoned, offered abundant opportunities, and it wasn’t long before Lindburg grabbed one. In 2009, he enrolled as a nondegree student in the master’s program at the Kroc Institute for International Peace Studies. “I got a tremendous amount out of that experience,” he says.

While wrapping up his second and final year, he considered how he could best put the program’s principles into practice. Working in a developing country didn’t seem like a fit. He recalls thinking, “What [do] I enjoy doing? I enjoy business. . . . Maybe I could have the biggest impact on people’s lives through job creation.”

So Lindburg launched South Bend Woodworks with the goal of providing training and jobs for the long-term unemployed. The product line came to him after he bought a wooden toy for his granddaughter that he thought could be made locally and for less money.

He was half right.

To get started, he purchased two buildings on the edge of downtown South Bend, and hired a work crew from the South Bend Center for the Homeless to clean and paint one structure and gut the other.

“I really had no employees,” Lindburg says. Luckily, while fishing around town for skilled woodworkers, he met Don Troxel, a South Bend guy nearing retirement age who had been woodworking since he was 14. Troxel came aboard as director of design and manufacturing. “That marked the beginning of what we are now,” says Lindburg.

He brought on a coatings finisher and a cabinet maker who had served in the military — both of whom had been out of work for more than a year. Together, they designed and produced 30 product prototypes. Most were Notre Dame-themed puzzles and plaques to present to the University, which later granted the company licensing to sell items on campus.

The company has since expanded its offerings, featuring everything from small duck push toys and stools to keepsake boxes and business-card holders. An enlarged version of the company’s toy train engine even graced the halls of the White House as part of its holiday décor last Christmas.

To fulfill his goal for the business, says Lindburg, “we work with WorkOne, local subcontractors, we source locally — all of that helps to create and sustain jobs here.” That translates to the purchase of a high-tech router out of Dale, Indiana, for instance, or the decision to gather most of their hardwoods from Michigan.

Lindburg employs five full-time and two part-time workers, a high school intern and two interns from Notre Dame’s industrial design program. He’d like more trainees, he says, but his objective, like the nature of the work at his shop, can’t be rushed. “You have to have a core group of employees with competency in order to get the product out.” In time, he adds, “[I’d] like to partner with someone like Goodwill to make sure we have the kind of counseling and mentoring for non-work related issues. That’s my goal and my aspiration. And if we get ourselves to sustainability, that becomes much easier to do.”

For that reason, this year is all about driving sales. The company sold 200 pieces in 2013 and stretched that to more than 500 last year with the addition of online purchases. To increase the firm’s line of college merchandise — it already sells Notre Dame and Princeton items — Lindburg plans to approach universities such as Michigan, Alabama, Purdue and Indiana to convince them to license his handcrafted wood products.

“I didn’t develop this company to make lots of money,” the 66-year-old says. “I’ve made my money, and my retirement is set.” But for the business to survive, “It has to stand on its own feet. Besides,” he quips, “I’ll want to retire someday. . . . At some point I’ll lose interest in funding the losses.”

Taking the business online (southbendwoodworks.com) increased its visibility, but a new hurdle cropped up. It’s a challenge conveying the quality and substance of a product when the customer can’t touch it. The whimsy of the Walter’s Pony rocking horse, which takes three days to finish, doesn’t quite come through in a digital image. And it’s harder to appreciate the distinct lines and pop of the leprechaun wall hanging, which undergoes four paint masks.

The cost of the items — the rocker goes for $169, the leprechaun $299, which includes shipping — reflects the quality and workmanship that goes into them, Lindburg says, which can include alternately and repeatedly sanding and finishing a piece up to four times. “We have to do that to get the right adhesion,” he explains. The resulting article, he adds, “is something that can be handed down to grandchildren. This is something that will last.”

As, he hopes, will the business. Meanwhile, Shouse, who holds an associate of arts degree from Holy Cross College, and other employees continue to broaden their skills. They do that simply by showing up at work, where they receive what Lindburg considers the most effective training: “sitting next to somebody who’s doing it correctly and basically patterning and mimicking.”

While that takes time, Shouse understands the need for safety and doing things right. And if the company takes off she hopes to remain a part of it. “It has the potential for creativity. There’s an art to it and a skill,” she says. “There’s lots of possibility.”