One of the aims of this magazine is to strengthen the bonds between our readers and the University.

We do this in print four times a year. We publish stories on these pages, readers react, many send us letters, some even write stories to share. The conversation moves on a quarterly cycle. It’s limited to a prescribed page count.

But there’s another conversation taking place. It can be found at magazine.nd.edu. This conversation changes daily. It isn’t confined by the constraints imposed by print. But it, too, speaks of Notre Dame. It, too, is intended to build a sense of community, to encourage dialogue. While the online medium replicates the quality, content and verve you’ve come to expect in print, magazine.nd.edu is taking on a life of its own, distinct from the quarterly edition.

You will find there columns written exclusively for the website and links to articles published elsewhere that we think you will find enlightening, entertaining, provocative. You can hear from editors as they describe their experiences about campus life — or life beyond campus. You can read about co-education, favorite student hangouts or memorable teachers, then add your voice to the discussion. You can read the class columns or follow links to other class sites and communities. You can see photos, watch videos, stroll down the lanes of memory, participate in the ongoing venture that is Notre Dame.

And we hope you’ll find, too, some meaningful or amusing items (like the sampling here now) that may not always merit attention in a space-limited quarterly but which can find a home at a place like magazine.nd.edu. 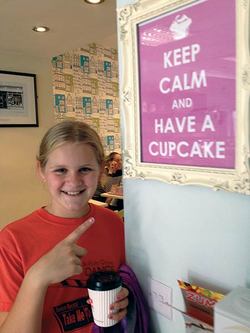 The wind was frigidly blowing against my bright and fuzzy purple jacket. My hair, traveling all over the place. My nose, turning bright pink each minute. I took a sip of the only warm thing I had left — the hot cocoa slipped down my throat and the marshmallows too gushy to even chew. I sighed, the warm air leaving my body and creating clouds. I took a seat on the wooden bench that gives me splinters in my jeans. The whole crowd was cheering. I was too cold.

I looked up at my mother who was too into the football game to even notice I was cold. I stood up and set my hot cocoa down underneath the bench. I looked over the heads of so many Notre Dame fans down onto the bright green field. I suddenly felt a warm and cozy squeeze that I know as my mom’s warm and loving arms. She gave me a peck on my head and leaned down to take a sip of my hot cocoa. I looked into her gleaming brown and gentle eyes. The score was 24 to 13. I stood up when the whole crowd started booming with cheers. I yelled at the top of my lungs “GO NOTRE DAME!!!!!!” I was born into a Notre Dame family and will continue to be like that. I sat down quietly to pick up my warm hot cocoa that was cold now, and stood back up and joined the crowd and had the time of my life.

Talento, she continued, “would never boast about his World War II heroics,” but “he received two purple hearts and a bronze star.” Talento had attended Notre Dame from 1941 to ’43 before enlisting in the U.S. Army and fighting in Europe. “He never graduated,” wrote his daughter, “but his heart belongs to Notre Dame.” 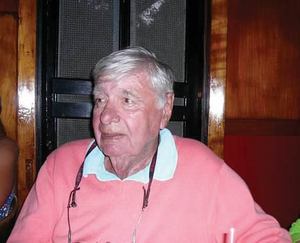 That affection, Talento explains in his letter, was due partly to a “regular guy priest” who was “a shining example of the spirit of Notre Dame and a bright star for ‘The Greatest Generation.’”

Simonitsch was a professor of philosophy and religion, a student adviser and, writes Talento, “of all things, a gourmet cook.” The priest, he says, “was a delight and would welcome a ‘bull session’ at almost any hour,” often about the chances of staying in school during the tumultuous times. Simonitsch would also become the link to campus life for the Domers scattered across the globe in various theatres of the war.

“As the war raged on,” Talento wrote, “Father Roland created an awesome mailing list of Domer names and their military base locations. This mailing list enabled him to have his newsletter reach a Domer Marine on a Pacific island, a carrier pilot with the U.S. fleet and, in my case, in a snowy foxhole during the Battle of the Bulge. We, the enlisted Domers, realized Father’s newsletters were holding the warrior student and the beautiful campus they loved together.”

As a footnote to this memory, Talento contacted University Archives and the good folks there sent him copies of Father Roland’s mailings, which spanned several years of the war. 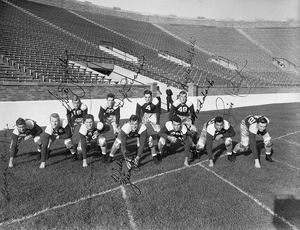 The package came from Gino Leonard Pucci in Largo, Florida. The letter says he enrolled in 1941, was a member of the Navy ROTC, was commissioned into active duty in February 1944, then returned to Notre Dame after the war, graduating in 1947.

“I am following the path of many of my classmates and am forced to extensive downsizing,” he writes, mentioning the summer issue of Notre Dame Magazine and its cover stories on Fighting Irish football. “I am forwarding an autographed photo of the football team during one of my years. I have no one to leave it to, so I thought it might fit among some of your historical items.”