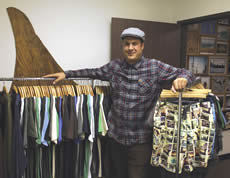 Andrew Sarnecki ’00 will tell you, “I don’t like the word ‘fashion.’” At least, that is, not in relation to his business.

This from a guy whose merchandise sells in more than 500 shops in 16 countries, including Australia, Japan and Costa Rica. That merchandise? Men’s surfing and climbing apparel.

But to him, he explains, the word “fashion” evokes images of runways and models. “I think of ‘high fashion,’” he adds. “Something that is not obtainable for most people.”

And Sarnecki, the 34-year-old creator and part-owner of HippyTree, a home-grown clothing company geared toward the “open-minded,” as its website states, is no elitist clothier. Images at the site of Sarnecki sporting flip-flops kind of give that away. “I didn’t go to design school or study fashion,” he says. “We’re into making wearable goods for your everyday person.”

Sarnecki grew up in La Habra, California. There, he and his family enjoyed the area’s many beaches, with Huntington and Newport as two of their favorites. During those early years, he says, he found himself swept up in something other than the tide. “The surf culture caught my eye,” Sarnecki says. “Whether it was the bright clothes or the baggy pants, I don’t know. That may have been a small part of it.”

But as a teen, he adds, the anti-establishment attitude of the surf culture really gripped his attention and his imagination. “It had its own fashion, music and art scene,” he explains, noting the brilliantly designed displays in local surf shops and print ads in surf magazines. Even “the graphics on the clothing and decals on the surfboards were inspiring.”

At that time, he says, “Many of the companies making surfboards and surf wear were not large corporations. They were start-up companies founded in people’s garages, and they were selling their products to independently owned surf shops run by surfers. This was all very appealing to me.”

So much so that after graduating from Notre Dame, where he majored in photography and graphic design, Sarnecki made the trek back home seeking work in the surfing industry.

Not long after his return, he took a job at Body Glove, a wetsuit company in Redondo Beach. During his six-plus years there, Sarnecki says, he touched all the creative functions of the business. Starting as an entry-level designer he moved from crafting hang tags and logos to product design of surfing wetsuits. Eventually he transitioned into advertising and marketing for the label and was hired as art director. All the while, he pursued his true career goal, surf and underwater photography.

He submitted his photos to the local surf magazines. “I was getting stuff published,” he says, “but things weren’t lining up the way I wanted.”

So Sarnecki, who had since moved to Hermosa Beach, in an area southwest of Los Angeles known as South Bay, started publishing his own surf photo booklets. He distributed them for free to surf shops. “I was building relationships with the shop owners,” who strongly encouraged him to create products they could sell in their stores, he says. In 2004, he released his first tide calendar, featuring his own art-driven photography, and a T-shirt under the HippyTree label. Within months, 12 stores sold out of his goods.

He continued to add to his product line, specializing in T-shirts that featured his playful graphics and photography. The company took off from there. “I’m an artist,” Sarnecki says. “I’m into designing practical garments that people need.” And what guy doesn’t need a dozen T-shirts a year and a sweet pair of nonbinding board shorts?

It may sound easy, Sarnecki says, but it isn’t. His sister Carolyn, who is a partner and the company’s COO, laughs, albeit sweetly, about her brother’s success. “We always knew Andrew had a special talent and that he would do something creative with it,” she says. “But, really, Andrew was an accidental businessman.”

However, she adds, over the years she has watched Sarnecki and the business evolve. The corporatization of the surf industry, marked notably by surf giant Billabong’s acquisition of other surfing retailers, she says, forced the company to adapt. In this regard, Carolyn credits her brother for his vision for the business. “He was able to look ahead and see how things would be changing,” she says, noting that the company is remapping its website and launching an online store. Still, she adds, “we appreciate the importance of the core surf shops. In order to be a relevant brand in our industry, you have to have a core.”

In return, Sarnecki lauds his sister, who holds an MBA from Columbia University, for keeping questionable business decisions in check. If he wants to shoot photos at Yosemite with some of their sponsored climbing athletes, for instance, his sister is there to weigh in on deadlines and dollars. Recently the label added climbing apparel to its line, Sarnecki says, tapping into the camping and outdoor industry with its “Surf and Stone” marketing platform. Reaching that niche, he adds, has been good for business.

Though HippyTree’s product-line is modest — mostly men’s T’s, sweatshirts and swim trunks — its marketing techniques take it beyond ordinary.

Sales manager and third business partner Josh Sweeney touts the company’s “Plant a Seed” campaign as proof of the effectiveness of building relationships in business. For the promotion, HippyTree packaged sunflower seeds in some of its product tags. They then asked buyers to grow a plant from those seeds and send in pictures of themselves with the plants when they bloomed.

“It took several months for people to grow that seed,” says Sweeney, a childhood friend of Sarnecki’s. “And every time they touch it they are subconsciously thinking of our company.” Plus, he adds, he and his associates like the personal reward that comes from “creating a cool conversation and dialogue” with people around the world. “It’s fun.”

The casual wear continues to sport Sarnecki’s unexpected and whimsical graphics — a tree shaped in the hang-loose surf symbol, a curl of a wave formed by wheat grass. Images, he says, that reflect both his childhood and adult experiences of nature that range from the Sequoia National Forest to Patagonia to the Galapagos Islands. “Of course all these beautiful landscapes I’ve witnessed have inspired the work.”

Nature imagery reaches every age and demographic because everyone can relate to it, says Sarnecki, who gets a surf in every couple of days before heading to the office. And if business wasn’t such a natural part of his life already, even Sarnecki’s mom helps out with billing and inventory a few days a week.

“It’s important that we are accessible and touchable,” adds Sweeney. “Our customers and fans see that we are normal people, just like them.”