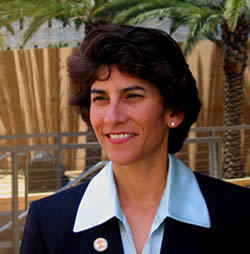 The call came in to the Washington office of the Mexican American Legal Defense and Educational Fund. It was Good Morning America.

The producers wanted to set up one of those typical morning-news-show’s verbal slugfests—two people dueling from opposite sides of an issue. In this case the debate that summer of 1987 was over legislation to enshrine English as the official language for public business. No more bilingual accommodation to speakers of Spanish or any other language.

GMA already had its English-only advocate lined up: Linda Chavez, a conservative writer and the defeated Republican candidate for Senate in Maryland the year before. She now headed an English-only lobbying group, U.S. English.

The producers wanted to pit her against a Latino with opposite views. But who would go toe-to-toe with the experienced Chavez?

She had joined the organization just three weeks earlier, after earning her law degree from the University of California, Berkeley’s Boalt Hall School of Law and completing a fellowship with the Center for Law in the Public Interest in Los Angeles.

At Notre Dame, Marty, as friends knew her, had been a Program of Liberal Studies major and energetic social-justice activist. Alumni from the early ’80s may remember her as one of the organizers of the student vote that led Notre Dame to boycott Campbell’s Soup and Libby’s products. It was intended to exert pressure on growers in Ohio and help farm workers negotiate better wages and working conditions. It worked.

As a senior Jimenez served as president of the Community for the International Lay Apostolate, a forerunner of Notre Dame’s Center for Social Concerns, and won the alumni association’s Fitzgerald Humanitarian Award.

Now she went to her boss, also an attorney, with the request from Good Morning America. His specialty was immigration law, so he asked who was assigned to handle language issues. She had to tell him. She was.

The call had come in on a Friday. The debate would be Monday. She studied all weekend to get ready. By all accounts she was.

Among other arguments, the second-generation Mexican American from San Antonio’s Sacred Heart Parish argued that the Constitution’s framers would have designated a national language if they’d thought it was a good idea. In the 1700s many languages other than English were being spoken on the continent, German especially. The framers chose not to force English on everybody, she said, because they thought it was better for society to evolve on its own.

That performance and subsequent ones opposite Chavez on the same issue helped establish Jimenez’s reputation nationally in political and social-justice circles.

She has since gone on to serve as a legislative attorney, project manager, policy analyst, fund-raiser and in many other roles with major government, advocacy and philanthropic organizations. Securing justice for the poor and for victims of discrimination is her passion, and she’s been especially active in health care. In the early 2000s she ran California Works for Better Health, a statewide $35 million program that aimed to improve health in poor communities through economic development.

Since last fall she has been senior health deputy for Los Angeles County Supervisor Gloria Molina. This is a bigger deal than it may sound to non-Angelinos. There are five districts in L.A. County, each one home to about 2 million people. About 20 percent of the ethnically diverse residents of Molina’s district live below the poverty line. More than 70 percent have no health insurance, according to county records. The budgets for the county’s hospitals and other heath-related operations—a major focus for Jimenez—run into the billions of dollars.

Of course, community groups are always clamoring for more investment in social services. One afternoon in early May, Jimenez is meeting with about a dozen representatives of L.A.‘s Asian and Pacific islander communities. One of the representatives explains about a promising pilot program the county hospitals have launched to help communicate with patients who don’t speak English. A laptop-computer-sized device is wheeled into the patient’s room, the patient speaks into it, and an interpreter at a remote location translates for the doctors and nurses and vice versa. The technology works well, the community group leader says. All that’s needed now is for the county to hire some translators.

Molina describes the impact Jimenez has had in her first eight months on the job as “absolutely huge.” As an example, she describes a lawsuit the county lost involving the recorder’s office. It left the county potentially liable for $200 million in damages. Though hardly part of the health deputy’s job description, Jimenez reviewed the case and suggested a new litigation strategy. The county was able to win a retrial.

Latinos are gaining political influence as their numbers grow. Democrat Molina says she’s often contacted by party officials looking to fill jobs. If a Democrat is elected president next year, she says, she expects to be fielding lots of calls looking for recommendations on qualified Latinos.

About eight years ago another Notre Dame alumna from a minority group traditionally underrepresented in national politics went from provost of Stanford University to adviser to a Republican presidential candidate to national security adviser for that president. Condoleezza Rice ’75M.A. now serves as secretary of state.

Molina says she could see Jimenez as a White House adviser on social issues.

“That’s the kind of capability this woman has.”