Margaret Ruffing Morris ’98 admits that becoming a producer and director for NFL Films was not exactly on her radar growing up. Neither was football. “I loved making movies from the time I was a kid and my dad had one of those first gigantic boombox-sized VHS cameras,” she says. “My brothers and sister and I would shoot Indiana Jones movies in our backyard. I was even involved in a TV show in high school.” 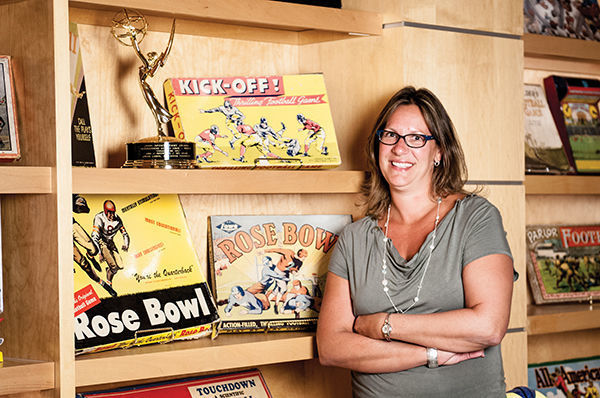 So how did she get from Ruffing family adventures in Michigan to cutting spectacular plays from pro football fields around the country? “NFL Films came to Notre Dame, and I honestly did the interview on a little bit of a whim,” she says. “But they liked what I could bring as a filmmaker, and I began to see that this was storytelling. It goes back to what you learn in creative writing and film classes. You’re talking about a journey and conflicts along the way.”

The Riverton, New Jersey, resident offers an example: “Right now I’m doing a story about a football player who grew up in a rough part of Michigan, bounced from teams and now is doing great in Detroit. It’s piecing together a story.”

That storytelling interest turned into a top-notch opportunity. “I was working for a show called Under the Helmet as an associate producer,” she says, “and I got my chance for a shoot.” That could also have been a chance to be intimidated, especially when you’re trying to get a crew of veterans to respect all 23 years of you.

“Confidence and a vision was how I did it,” she says. “You need to be willing to listen to others but, in the end, have your ideas and lead the way.”

Despite her push to be in the zone that day for this youth-oriented show, the session didn’t go by in a blur. “I still remember craft services, a grip truck and being around all these people doing it for years . . . and there’s 23-year-old me, and I have all these grand ideas and storyboarding it all out,” she says. “It was a terrific opportunity.”

She credits the late legend Steve Sabol with helping her develop confidence. Sabol became known as an on-camera host for NFL Films productions, which started with just him and his father filming football and became a multimillion dollar operation.

“One of my favorite things that Steve would say is, ‘There’s nothing better than a spectacular failure,’” she says. “He wanted to push you to try different things and approaches. That, hey, your idea could work.”

Ruffing Morris is proud to say that many of her ideas did work — and when her immediate boss moved up, she was named head of NFL Under the Helmet. It was an unusual position to be in, considering the lack of women in her field. “I did feel a responsibility,” she says. “But I wasn’t treated differently. If your work was good then you progressed.”

Overseeing the studio as the head producer of the show, her job was to make sure everything ran smoothly. “It was really all aspects of production,” she says. “I think I was the choice to take over because of the way I completely embraced the show.”

One of her favorite shoots for the show was when she got to combine her passion for film with boating; she was once sailing club commodore for Notre Dame, which appeared in the national rankings during her stint. “I had a contact with [America’s Cup winner] Dennis Conner and got Jim Harbaugh and his brother John out on a boat,” she says. “It was in San Diego, beautiful water. . . . I had no idea they’d both be coaching teams some day.”

Another top storytelling moment came when she got to share the tale of the Green Bay Packers’ 2002 season. Her vision was straightforward — she went backward. “One more chance to show something differently — knowing the ending gives you a completely different perspective. . . . I loved doing it.”

And she loves to show the spirit of the unknown.

In football, she notes, “The guys are wearing full pads and helmets, so you don’t see faces and don’t know who they are — unlike other sports. We pull away the mask and reveal who the people you’ve been watching really are.”

The result of that unmasking has been five sports Emmy Awards. “I’ve had a chance to work on so many different kinds of pieces,” the 38-year-old says. “I can be jumping from a very serious 10-minute thing with slow music to a two-minute fun piece with hip-hop music.”

Neil Zender ’98, a producer with NFL Films and fellow Notre Dame graduate, has been impressed by Ruffing Morris ever since they started on the same day. “She’s driven, and she knows what her vision is,” he says. “When you have a crew ready to go, they need to be led. But she’s going to find the story and make sure it comes out. And her editing is as good as it gets. Creating these amazing segments from sound bites for Chris Berman and Monday Night Football — she’s so quick and can take any kind of pressure.”

Despite more than 15 years of football film, Ruffing Morris admits she’s still not a diehard fan, and she believes that can actually help. “Sometimes you get too stuck in loving the statistics that you miss the big picture,” she says. “Sometimes being a step back helps you to see the action that’s really going on.”

The next producing role for Ruffing Morris is NFL Rush, slated to premiere this fall. And she has scaled back a bit to spend more time with her children, Sam, 8, and Hadley, 3. “It’s a balance, but I have a great time doing this,” she says. “When you focus, it’s fun to watch the images come alive.”

Eric Butterman has profiled Regis Philbin ’53, Anne Heaton ’94 and others for this magazine. Contact him at ericbutterman@yahoo.com.