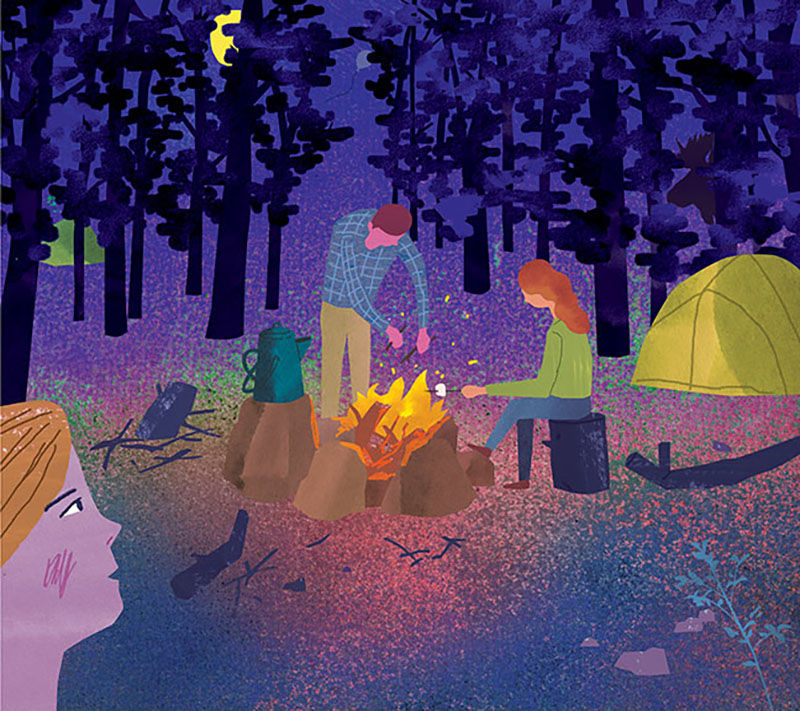 There is a town in North Ontario,

where pine groves top out in pools of indigo night, and the ground is a bed of needles under bare feet. Homes are made of nylon, and their doors unzip to the morning’s hazy sun. Inhabitants travel in hollowed out trees to no destination. The heart of this place is a lonely morning muteness, beating along to the low bass of a dragonfly and the rhythm of paddles cutting the surface of water.

With dream comfort memory to spare.

At night there are fires. Hundreds of fires. They crackle on all sides and burn in pinpoint across the dark expanse of lake. They tell us we are not alone. We are just one of the tribal families united by the evening ceremony of fire. Dad crouches in front of the fire pit, and I feel like I am watching a painter before a canvas. His arms move in broad strokes, reaching for small twigs, crumpled papers, large logs. Smoke billows. Flames erupt. I could watch mesmerized for hours as they lick the borders of the night.

Dad cracks open a Yuengling and tells us old, probably true, college stories. There’s the time he and Bob Mac stole a gas-station balloon and drove away with it tied to the top of their car. Or the time he bribed the waiter to put “crazy hot sauce” on Al Burger’s tacos, and Al proceeded outside to stick his face in the snow. I collect these memories like stones in my pockets: the time he hitchhiked to Maine; the time he went to a Communist rally to impress a girl; the night he met my mother at the Jersey Shore. We know these memories, my brothers and I. They are not ours, but we slip into them comfortably.

Another Yuengling is opened, another marshmallow roasted, another log consumed. These are our measures of time. Slowly and firmly, dusk settles into night, and the fire smolders into embers. It is dark and still. The air cradles a loon’s howl and the misplaced chords of a Dixie Chicks song. I tuck into my sleeping bag, replaying Dad’s stories in my head, and their edges become less defined as I slip from consciousness.

Memory is an odd thing. Sometimes we are aware when memories are being made. “We’ll look back on this one day,” people say, usually to justify a bad situation. But most memories are not packaged and stored upon manufacture. They are subatomic units that slip under the stream of consciousness and settle like silt on the bedrock of our souls. They rest dormant at the bottom of our being until they are disturbed. Then their forms come swimming out into the wide ocean of awareness, and we realize that they’ve been there — with us, part of us — all along.

I wonder what memories will reveal themselves when I’m sitting around a campfire with my own children. What hibernating substance of my soul will lumber out from the depths into the light of the fire?

I suspect it will be something like this: My brothers and I are squished in the back seat of our minivan. It is dusk. The light is low and charged with magic. Neil Young’s “Helpless” is on the car radio. Mom mutters in a low call: “mooooooose, moose, moose.” “Stop the car!” someone yells, and my heart leaps. We all see it now, the brown blob in tall grass. Is it? Just a shadow? No. Are you sure? I think? Yes, it is! A moose! The silhouette of its shaggy head appears from the blob, adorned by lily pads. “All right, careful, careful,” Mom says to the three of us, as we scramble out of our seat belts and bolt across the highway. Cars start piling up behind us, first one, then 10. Families join us on the side of the road. They brandish binoculars and speak in hushed and eager voices. We’re a bunch of strangers on the side of the interstate, but this moose has brought us together, brought us out of ourselves.

This memory seems unremarkable, but it is so essential to my being that, whenever I try to pierce through layers of ego and pride and self-consciousness to the pure substance of my soul, it is the scene that emerges. At the bottom of my soul is a moose, for reasons hidden even from me.

And in my mind, I still need a place to go.

We spend our mornings on the water. At lunch, my family slithers like lizards onto the sun-baked rock of Bates Island. We are in the middle of Opeongo Lake, the largest in Algonquin Park. Twenty yards from where we rest is the acclaimed “Rock of Bravery” — a large, submerged stone that is the one tenuous refuge in the threatening expanse of water. The wager is simple: Swim out to the rock on your own and you get a candy bar. The prospect is difficult: about 20 meters of inky openness, with northern pike just waiting to take off a toe.

I want to venture out. But the island is warm and comfortable, and I feel content to sit here, eating beef jerky forever. I want to be brave. But maybe more than that, I want to cling to something firm and known. As I sit in this existential tension, I sense with dread that the island is disappearing. The left bank has already dissolved into nothingness, and the slow eraser of time is rubbing the rest from existence. Soon the island will be a memory, and I can’t stand on the shores of a memory. There is no back. There is only forward. I dive in, and wonder if it’s still bravery if it’s forced upon me.

I’m doggy paddling frantically through open waters. Dad has already swum out and is now balancing atop the rock. I know that soon he will reach out his arms, pull me in and pat my head, saying, “Good job, girlie.” But not yet. For now, I swim.

All my changes were there.

This summer my brothers and I returned to Algonquin. We traveled from three different cities and three different lives to this place that has withstood the test of time while we have not. Here amidst ancient trees and glacial lakes, time feels irrelevant. We try to keep stride with this paceless place. We visit the same diner, where the same waitresses have been taking the same orders for decades. We go on the same hikes. We tell the same jokes. But when we play the same Neil Young songs, my heart beats nostalgic and the facade breaks. He sings of a place that is there, right before me . . .

Blue, blue windows behind the stars.

Yellow moon on the rise.

Big birds flying across the sky,

Throwing shadows on our eyes.

. . . and yet, I long for it. Because what I truly want is not a place, but a time — a time when this was all pure and present. What I long for is an unending “now” that will never be cast in the long shadow of memory. In a sense, I long for eternity. But not even Algonquin can provide that. Its trees will fall and its lands erode.

In the end, when we have grown old and moved away, when our parents have died and the sun has burnt out from the sky, what will have withstood the test of time? What is the thing of permanence that makes life and history whole? To say it is the soul seems a lofty and intangible answer. Do I even know what I believe the soul to be? I don’t. In this moment, all I know is that I must find a moose.

And so my brothers and I travel through the arteries of the Ontario wilderness into the heart of moose country. We paddle for three days and portage over 10 miles. One morning, as chance has it, we decide to paddle along the right side of an embankment instead of the left, and out of the marsh comes the telltale blob from which a head emerges. We paddle closer and there, shining in the brilliant sun, is a moose. It is big and solid and real. It brings me out of myself and into the present. I am here, in a canoe, in front of a moose, in the heart of Ontario. And I am now, 25 years old on an August noon with the sun beating squarely on my shoulders. It seems suddenly unimportant that all the rest of time and place are sands in the sieve of memory. The present is the only thing that is real and eternal. The rest is — and peaceably can be — liquid, tenuous, ephemeral, fleeting and

Mary-Kate Burns’ essay won the inaugural Schaal Prize, first place in this magazine’s 2019 Young Alumni Essay Contest. Burns is a full-time missionary at A Simple House of Sts. Francis & Alphonsus in Kansas City, Missouri, where she strives to make friends with the poor and the homeless.