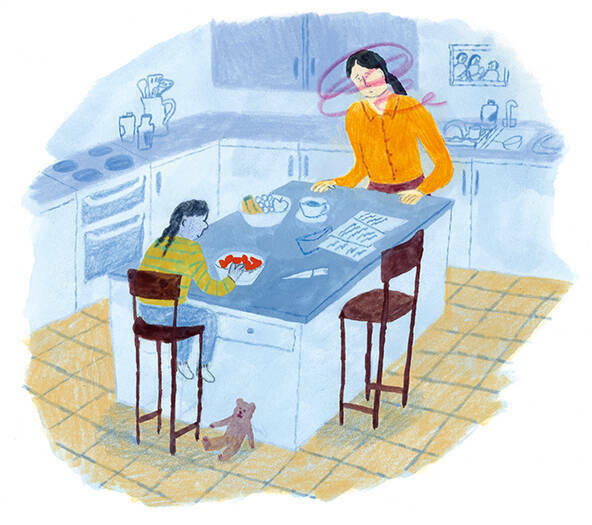 My 7-year-old daughter, Micki, sits on a high-back stool at the opposite end of the kitchen counter. A plate of heart-shaped strawberries and a paring knife lie in front of her. I want to reach for the knife, to make sure she handles it safely. But a sudden gush in my stomach feels like I’m on a roller coaster moving higher, about to dive down and then around and up in a loop to hang for a bit. My body buzzes, déjà vu, an aura.

I grip the edges of the counter, waiting for the drop.

Hinged at the waist, leaning over the cold, white countertop, the left side of my body turns warm. My left cheek, ear and head burn. But I do not look different. No one can see what I feel inside, a misfire in my brain, a seizure. My internal signals are unrecognizable to others, like a lost hiker using a flashlight in the sunshine, indistinguishable from the light of day.

I look at Micki and my 5-year-old son, John, sitting on the couch. The left side of my body, hot seconds ago, is now numb. This must be what a stroke feels like.

My ears hurt and pressure fills my head, an overblown balloon ready to pop. Noises that were obscure moments ago now crescendo around me. Our dog’s footsteps sound like a fighter jet. The sound of the television resembles a train inside a tunnel. I hear Micki looking at the knife, soundless yet screeching at me like fingernails on a chalkboard. When I say something in my mind, my voice echoes, shrouded with loud static. I’m OK. I have to be. This can’t turn into something bad.

“I’m having one,” I say aloud. But maybe the words don’t come out, or I say them too quietly, slurred. If I don’t speak the words clearly, no one knows. My husband, Ryan, works at his computer in our office down the hall. He can’t hear me anyway.

Looking toward the knife, I smell and taste something toxic, metallic, like chemicals in a laboratory. I have nothing in my mouth or nose, but I can’t spit or swallow or blow into a tissue to dismiss the odor or flavor. This must be the smell of my sizzling brain.

I slump against the counter, anxious, although I know the heat on my left side, the numbness, the noises, the smell and taste are only in my mind. My brain has fired a defective electrical signal, a seizure in my temporal lobe where a rare blood-vessel malformation resided until 2017, when I was 37 and my neurosurgeon drilled, sawed, scooped, scraped and resected a potentially fatal lesion via four surgeries. Though the lesion is gone, the scar tissue causes seizures.

I know I must hold the seizure in my barely functioning temporal lobe or I’ll lose consciousness and convulse. But I don’t control what happens next. I close my eyes, take deep breaths and squeeze my fists, hoping my controllable physical actions contain the firestorm.

When a seizure stays localized in one lobe, it’s called a focal aware seizure. I’m aware I’m having a seizure, I’m not convulsing, I’m awake to talk myself through it, mostly. This type of irregular brain activity is a warning, an aura, that a tonic-clonic or grand mal seizure could ensue, but it is a seizure in its own right, too. During a tonic-clonic seizure, I’ll collapse, stiffen and convulse.

After a minute (I estimate with my broken brain), the heat, numbness and hallucinations of sounds, smell and taste abate, and I walk from the kitchen to the bathroom. My feet work, even the left one that was scorching and had no feeling seconds ago. My stomach hurts.

Thankfully, I don’t lose consciousness or shake in the bathroom as I did on its gray stone tile that night of my first    tonic-clonic two years ago. My eyes don’t swivel in different directions and roll back before my eyelids shut tight. I don’t gurgle, turn purple in the face, foam at the mouth or defecate on the floor, unresponsive, naked. My body remains calm. I don’t stiffen or arch my back. I do not jerk back and forth against the porcelain toilet. Clank, clank, clank, Ryan once described it to me.

This time, Ryan doesn’t have to wrestle my jolting body or attempt to pry my mouth open so I can breathe. He doesn’t have to reposition my body to prevent me from knocking my head on the glass shower door. Bang, bang, bang, he once described it to me.

My seizure in the kitchen does not evolve into a tonic-clonic. I look at my face in the bathroom mirror. My right eyelid is droopy, but the electrical fire has stopped.

Ryan doesn’t have to call the paramedics, afraid that I’m dying. My children don’t have to see the flashing lights from their bedroom window or hear the sirens howling or the heavy footsteps of the first responders as they haul me down the stairs. Micki and John don’t have to see their father, frantic, trying to contact a neighbor to watch them so he can join me at the hospital.

“Should we book a flight right now?” my mother doesn’t have to ask.

“Can we see her at the hospital yet, Dad?” my kids don’t have to ask.

When I have a focal aware seizure, I know I’m likely to have more in the hours and days that follow. I worry because I can’t trust my body or mind. I ask my daughter to tell me if I take a wrong turn on the drive to her dance class. I ask my son to check his own math homework; I might miss something in my review. I tell Ryan that we’ll order dinner, but he must call because I might forget what everyone wants.

The seizures’ invisibility is not a matter of others’ negligence, but still I am frustrated when no one recognizes what happens to me. Even if I told you a seizure was happening and warned you — if the words made it out of my mouth — you wouldn’t recognize anything abnormal. You might not believe me, because you cannot see what I feel.

I had six focal aware seizures the day our dog died, two the day after my birthday and five while sitting on the couch on a random day in January. I had dozens during the days before Christmas while wrapping presents behind a closed door.

Sometimes they happen in the car. They happen when I stay up too late. They happen when I write, even as I’m trying to get my words and feelings on the page. My doctor says I should sleep more. My family says I sleep too much. They tell me I don’t need that much sleep, it’s all in my head, I get enough sleep already.

Yes, it is in my head. It’s in my asymmetrical brain, one side smaller than the other, where a hole exists. The seizures remind me I’m scarred, damaged, inadequate. My hearing, a section of my eyesight, bits of memory, my ability to comprehend or multitask, my emotions and my confidence are all affected. Some effects are physiological, some are emotional. I’m not sure which is worse.

Sometimes I practice lifesaving tactics in case my focal seizures turn into tonic-clonics. How fast can I take the food out of the oven before losing consciousness? How fast can I remove a hot pan from the stove before convulsing? How quickly can I pull over before seizing up with my kids in the car? Can I call for help and collapse by the door so the paramedics can find me?

The reality is that I won’t know when a temporal lobe seizure may evolve into a tonic-clonic. They are unpredictable, and no one will notice until I’m convulsing and unconscious, foaming at the mouth, crashing the car or burning down the house.

The focal seizures don’t scare me. They are a nuisance. They are quick. I know the routine — buzz, hot, numb, sound, taste, smell, bathroom. But the unpredictability of a tonic-clonic, and understanding that only I recognize the warning signs, makes me not OK.

I walk from the bathroom to the office. Standing in the doorway, I catch Ryan’s eyes when he looks up from his computer. “Hey, I had one.”

“I think so. But watch me just in case. I need to help Micki now.”

Vanessa Garza is a brain arteriovenous malformation survivor, epileptic and writer. She lives in Boston with her family.