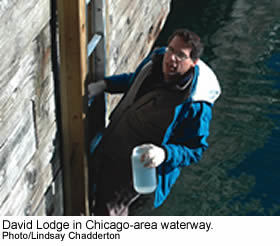 Out of the depths of the lagoons they come, the alien monsters advancing slowly, relentlessly moving northward, ever northward. Until now they are poised on the verge of wreaking untold havoc.

“The menace of the Asian carp” may sound like a low-budget Japanese horror flick, but, as Professor David Lodge, director of Notre Dame’s Center for Aquatic Conservation, will tell you, it is all too real.

The fish, actually two species, bighead and silver carp, offer a classic example of what can happen when non-native species that have no known predators are released into the wild: They run amok. Asian carp routinely grow to 4 feet long and 100 pounds. With their voracious appetite they displace native species wherever they go. And that is a Big Worry when they are bearing down on the Great Lakes’ $7 billion fishing industry.

Originally brought to the United States in the 1970s to clean retention lagoons in southern fish farms and water treatment plants, the fish escaped into the Mississippi River system during severe flooding in the early ’90s. Since then they have been making their way upstream, and now, apparently, they are knocking on the Great Lakes’ door.

In a project with the Nature Conservancy to develop more sensitive fish-monitoring tools, Lodge and his colleagues tested water samples beginning last summer, looking for environmental DNA from microscopic bits of fish tissue suspended in the water.

A sample they drew from Calumet Harbor on the southwestern shore of Lake Michigan last year held very bad news. It showed traces of silver carp DNA, evidence strongly suggesting the fish had breached a two-level electric barrier on the Chicago Sanitary and Ship Canal, which connects the Great Lakes and Mississippi River basins.

In the wake of the findings, federal officials announced a $78.5 million plan of 25 long- and short-term measures, excluding closing locks, to keep the carp out of the Great Lakes. Earlier this year, the state of Michigan had lost an appeal to the U.S. Supreme Court for a preliminary injunction to close canal locks, thus separating the rivers from the Great Lakes. The court sided with attorneys for the state of Illinois, who argued that closing the locks would cause irrevocable harm to the state’s $200 million annual shipping and barge industry. As of March, two other Supreme Court cases on the issue were still pending.

“The fact is our DNA surveillance technique is what motivated all of this. Everyone involved with the canal knew this day would come, that the Asian carp would be up against the electric barrier. Our results just sped time up,” Lodge says.

Until the Notre Dame-Nature Consevancy finding, the Army Corps of Engineers and other agencies had thought the point of the fish invasion was still 20 miles farther downstream, giving everyone more time to respond.

“It was shocking and depressing when we found the DNA in Calumet Harbor, above the barrier,” Lodge says.

However, the ND authority on invasive species believes there is yet time to avert disaster. “Just because we found silver carp DNA in Calumet Harbor does not mean there is a self-perpetuating population in Lake Michigan,” he argues. “Our DNA finding just makes it more urgent that no more individuals of either species get into the lake.”

While testifying in February before a Congressional subcommittee, Lodge was asked how bad the Asian carp invasion of the Great Lakes could be. “There’s only one way to find out,” he said, “and I don’t think any of us want that.”