If the pope came to your house tomorrow night, what wine would you serve with dinner?

If you know some wine history, you might say Châteauneuf-du-Pape. But then, what about Francis’s preferential option for the poor? Maybe you should serve something more economical. Or perhaps an earthy malbec, a common grape from his home in Argentina. Or something more joyful, like the sparkling wine from Asti, where his father was born. 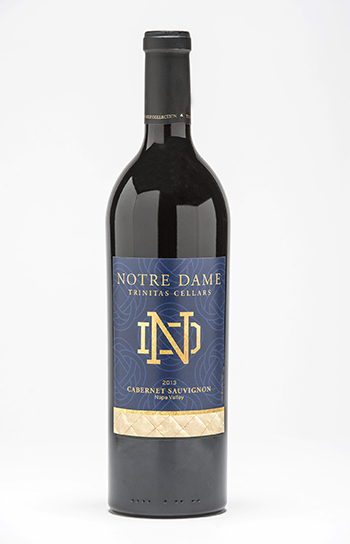 Or you could simply ask Garrett Busch ’09, ’10MBA, who knows the answer: You serve the pope a nice glass of Cabernet FRANCis, made expressly for him at Trinitas Cellars in Napa, California. Garrett should know. He’s the CEO.

The roots of the story go back to 2006, when Garrett’s father, Tim Busch, was on a pilgrimage to the Vatican with other trustees of the Papal Foundation. “It’s traditional when meeting the Holy Father to bring a gift with you,” Garrett explains. “My dad had seen gifts on previous trips — rosaries, garments, little hats — and wanted to give something unique. So he called me on the phone and said, ‘Why don’t we make a wine just for the pope?’”

Trinitas Cellars had been making wine since 2002. Kevin Mills brought his 30 years of farming and winemaking knowledge to the company in 2007 and assisted in diversifying its offerings. This meant working with the best grapes Trinitas could find.

What grape would best serve for Pope Benedict?

The answer is in the name of the wine itself: RatZINger, or zinfandel. The Trinitas team labored for more than a year to perfect it. In 2008, during his annual trip to Rome, Tim Busch presented the wine to Benedict XVI.

The pope’s reaction? “He was pretty excited,” Garrett says. “When he saw the label, his eyes just lit up.” It was the personal connection that affected him, the sense that he was known as an individual. “As Benedict left the room,” Garrett continues, “a lot of the gifts were being carted off to storage. But the pope paused before getting into an elevator and said, ‘Wait, wait!’ Everyone looked startled, thinking something was wrong. But the pope just said with a shy smile, ‘This gift is for me.’” And with that, Benedict took the bottle of RatZINger with him to his papal apartments.

Garrett is careful to point out that he doesn’t know if the pope actually liked the wine or even if he drank it. But it is hardly a stretch to imagine that the intellectual Benedict appreciated what Italians call a vino di meditazione (wine for meditation), especially as he was pondering and praying over a decision he was about to make that would take the entire world by surprise.

Benedict retired in early February 2013. “My dad had already planned to present him with more wine later that spring,” Garrett recalls, “but he called immediately to say, ‘I’m going to Rome, and now I gotta have a wine for Pope Francis!’ I said, ‘Dad, I can’t make a wine in 30 days. In 30 days, I can’t even get the government to approve the label.’”

But it just so happened, or perhaps it was providential, that Trinitas had been working with a vineyard in northern Sonoma County. The grape in that vineyard, cabernet franc, grew perfectly there on a high hillside. “We were experimenting with it a little,” says Garrett. “It was sort of my baby in the cellar. I was even thinking of calling it Garrett’s Stock, but when my dad told me he needed a wine for the new pope, it took me all of a second to think and say, ‘Dad, we’re good. We’re going to make Cabernet FRANCis.”’

Providential? Garrett grins. “Pope Francis made it easy for us.”

Still, the cabernet wasn’t ready, so his father took over more RatZINger. The following spring, as Tim prepared to visit the Vatican again, he called Garrett to ask for the new wine maturing in the barrels back in Napa. However, it would not be bottled until months later.

So Garrett printed the labels himself, bottled a case by hand and sent it to his father. Tim took six bottles of Cabernet FRANCis to the Vatican in April 2014. Five went to cardinals and the last was reserved for the pope himself.

“Listen, Pope Francis really, really likes wine,” notes Garrett. And his father was elated; he had another regular customer. His father soon got a phone call from a Vatican official, who told him, “Tim, it was generous of you to make wine for the Holy Father. In fact, he brought your wine with him to lunch. Where can he get more?”

Who could have anticipated that serving wine at the Vatican would require delicate negotiation? “My father knew there were still five months to go before the bigger bottling of Cabernet FRANCis, so he called the five cardinals, apologized and asked gently if they could send their bottles to the pope’s apartment. He even offered to replace them with interest.” On the other end, however, he was met with awkward silence.

So it wasn’t until September 2014 that Pope Francis received several cases of Cabernet FRANCis. But the story does not end there: At the pope’s request, Trinitas wines were consumed during his recent visit to the States at most of the lunches and dinners. On several occasions, in the company of assistants and distinguished guests, the pope drank Trinitas wines exclusively.

It would be tempting to think the pope’s choice of wine was just a lucky break for Trinitas Cellars, a little firm in the great global ocean of big-business wine.

But Garrett has another view. Wine has never been a solitary drink: It is the drink of toasts, of marriage feasts, of special social occasions. Fine wine in particular, Garrett rightly observes, is still dominated by families. “It seems that these days,” he says, “people really want to know who is behind the brand.”

This impulse, and the pleasure of establishing a real connection with a producer, is what lies behind an initiative called The Notre Dame Wine Academy. The Morris Inn regularly hosts special dinners at Sorin’s, where Notre Dame vintners — and quite a few alumni are vintners or manager of wineries — share their wines. Garrett has now done a couple of these. “Other universities do fancy wine dinners,” he says, “but Notre Dame’s wine dinners are unique in that the service lets you make a direct and personal connection with high-quality producers.”

The University now has made its connection with Trinitas explicit: Since midsummer, Trinitas has been permitted to display the Notre Dame logo on the most popular wines in its portfolio, a chardonnay, a red blend and a cabernet sauvignon. These wines were available for Notre Dame families in time for Christmas through the Trinitas website.

“We like to blend our faith with our life and business. If you look back at wine’s history, it’s a very romantic business with a lot of family passion,” says Garrett. “But wine is also an integral part of Catholic tradition, and not just in the Mass. If you look at the wedding at Cana, and you think about it, that’s kind of what we do. We’re basically taking what God gives us and using our God-given gifts to transform it.”

And when it comes to sharing a family meal with the pope, that might be the best wine service of all.