If you were to think it was destiny that Michael Rigali ’83 ended up in the church restoration business, there may be more than 100 years of evidence to back it up. The latter part of the 19th century saw his great-grandfather come to America from Italy as a teenager to join the Daprato carvers, four brothers renowned for their religious statuary and altars. “He was a really good artist in Barga in Italy, and his teacher was a maestro who knew the Dapratos and happened to recommend him,” Rigali says. “He took the leap and changed the destiny of our family.” 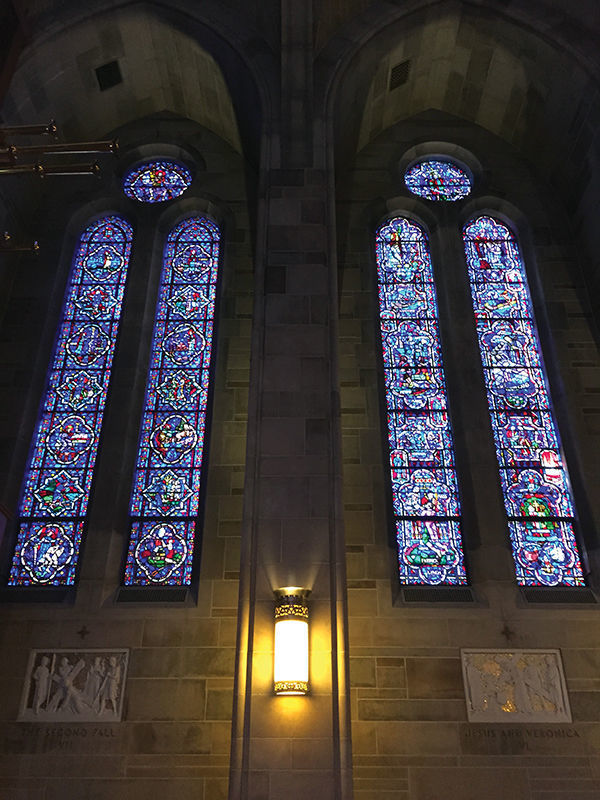 Many Rigalis have been beautifying churches ever since, as five generations of the family have been part of Daprato Rigali Studios, located in the Norwood Park section of Chicago. “This isn’t a job,” Rigali says. “It’s a passion.”

Another passion of his, Notre Dame, indirectly led to a notable job for Daprato Rigali. “I saw a friend of mine, Ed Fisher, who I knew from Dillon Hall, and he mentioned his church [the Cathedral of Christ the King in Atlanta] needed a restoration,” Rigali says. “I offered to consult for free just to help out and, ultimately, they asked us to do the job. It turned out really well. And we rekindled our friendship from that initial meeting. That Notre Dame experience pays you back in so many ways. My grandfather [Joseph, Class of 1926] even was able to play for Rockne and my father [Robert ’54] for Leahy — Notre Dame is a big part of our family.”

The Atlanta cathedral job focused heavily on restoring stained glass windows. “With the glass, we had to evaluate the window itself,” says Rigali, who worked at IBM for a decade in administration and sales before joining the family business. “Protection glass may protect it, but it was done wrong because it wasn’t vented. It was actually speeding up damage. What we learned from looking at these metal frames was that the windows needed to come off from the outside instead of the inside.”

That experience was an example of the need to be knowledgeable about and ready for anything in the restoration business. “When we restore an older church it can involve evaluating paintings, stencil working, marble and more,” says Rigali. “I’d say around 95 percent of them are Catholic churches — in the late ’60s, ’70 and ’80s, many painted their churches one color and we sometimes even help them go back to traditional layouts or looks.”

He says the Rigalis bless the day his great-grandfather immigrated and, after a few years, became a business partner in the Daprato Statuary Company. He’s also quick to deflect his stature as a vice president of the company, which combined the two families’ names in 1960 and has restored churches such as St. Clement and Holy Name Cathedral in Chicago, pointing out that he’s one of several family members who leads the way.

“My son Danny is fifth generation in the business and just joined us a few years ago,” he says. “Just like I got to work with my father. I remember going to work with him as a kid and seeing the pride he took and appreciating all these great buildings getting improved. It’s an amazing feeling to know we can be a part of people enjoying church and adding something to their life.”

Eric Butterman has profiled Regis Philbin ’53, Thom Browne ’88, Anne Heaton ’94 and others for this magazine. Contact him at ericbutterman@yahoo.com.