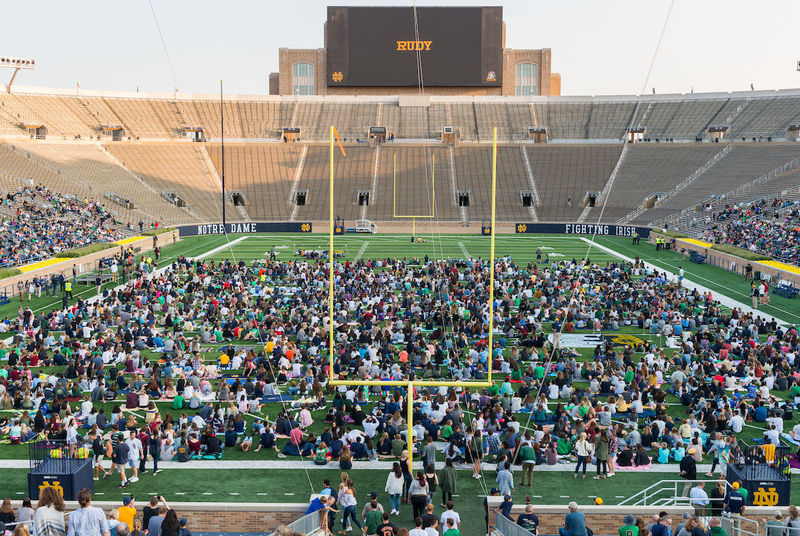 “I bet I know something you don’t know.”

I was wary of the smirk on the Super 8 owner’s face. It was 2 a.m. in Lexington, Virginia, and my sister and I had stopped here in the midst of 25 hours spent dragging her trailer of dorm-room gear from Alabama to our home in New York. I was wary of the seedy hotel, of its empty parking lot, of leaving the trailer there overnight — but the owner’s accent was charming and, according to his hat, he was a Vietnam vet. How bad could it be?

“A bullfrog wouldn’t bump his ass on the ground if he had wings.”

The man found his joke funnier than I did, but it broke the tension nonetheless. We were soon fast friends, and he told me the movie-trailer version of his life as I waited in the lobby for my sister and her boyfriend. In time, I learned things I really hadn’t known.

The reason most hotels in town had no vacancies was because a quarterhorse convention was happening that weekend. (Hadn’t I heard of it?) The man had a wife, and a 10-year-old granddaughter, and they even had a favorite weekend hobby: trips to the local drive-in theater. (Would I be in Lexington for long? He could show it to me on the map!)

He proudly told the story of the town’s valiant effort to save Hull’s Drive-In Theater — a cinema that now proclaims itself “the nation’s first non-profit, community-owned, drive-in theater.” In 2013, the drive-in was nearly shuttered when changing mores in film production required an upgrade from the theater’s old 35mm film projector to a $60,000 digital one. The citizens rallied around their town institution, held fundraisers, and eventually, the theater was saved.

“We wanted to keep something special for the kids,” he said.

My moving crew didn’t have time to visit Hull’s, but that night, I dreamed of my own summer theater memories.

The 56 Auto Drive-in is in Massena, New York — a factory town that my father used to work in. It’s a 40-minute drive from our house, but my siblings and I would beg to go, and on a couple of occasions each summer, my parents would relent. After a hot day in the garden or picking wild blackberries, we’d throw on our pajamas and follow our religious drive-in rituals. Sodas cooled with the contents of our refrigerator’s ice tray. Calzone’s from Tony’s. French onion dip and a Symphony bar from a gas station along the route. They probably weren’t the healthiest traditions (my sister usually threw up at some point during the second feature), but it was a treat that we felt like we had earned.

Years later, I can still list every movie I ever saw at the drive-in. You could attribute this uncharacteristically good recall to the lack of entertainment in my tiny hometown, but I think it’s a testament to the iconic experience a drive-in can provide. Whether the night’s bill was a space epic or a superhero franchise, there was something otherworldly about the stars on screen blending with those in the sky.

So imagine my surprise when I learned there were only 317 drive-ins in the entire U.S. in 2018.

Since that discovery, I’ve found myself thinking about and researching the theaters. Are they in danger of extinction like the black rhino and the blue whale and the chimpanzee? Or will they be revived like vinyl, coke-bottle glasses and high-waisted jeans?

The first drive-in as we know it today opened in the summer of 1933 in Camden, New Jersey. Richard Hollingstead’s “automobile movie theater” was an adaptation of the outdoor theaters designed on faraway bases to entertain soldiers, and with its simple design and low overhead, the idea quickly caught on.

Around 100 drive-in theaters had opened in the U.S. by the time we entered World War II, and the boom only grew when the war ended and soldiers returned to lives of disposable incomes, leisure time, and young families in need of entertainment. By the end of the ’40s, drive-ins were a hallmark of small-town America — in 1947 and 1948 alone, businessmen and corporations built 700 of them.

As I began to research drive-in theaters to assess their readiness for a comeback, I wondered if any Notre Dame grad had ever owned a theater. After an awkward discussion with the alumni association — turns out “drive-in theater owner” isn’t exactly a searchable profession in the database — and a few hours looking through the University archives, I found Charles McFarland ’38.

Well, really, I found his drive-in. According to mid-century editions of the Notre Dame Alumnus, “McFarland’s Drive-In Theater” was, for some time, the monthly meeting place of the Notre Dame Club of Oklahoma City. Among locals, it had a different name: the Lake Air Drive-in, of Bethany, Oklahoma.

In 1950, McFarland, a returning veteran, partnered with his brother Robert to open a theater aimed at children and families. Unwelcome in regular theaters of the time because they were “too loud,” drive-ins offered a place where families could enjoy movies, too.

Some drive-ins of the era came with outlandish extras, from “monkey jungles” filled with real monkeys to horseback rides and live pre-show entertainment. But the McFarlands kept their attraction classic. A small playground offered diversions for especially ornery kids, but apart from that, the movies and the concession stand were the main event. (The latter’s famous specialty? A breaded mutton sandwich with mayonnaise and onion rings.)

The brothers sold Lake Air in 1959, the start of a progression for the property that would see it transformed into everything from a go-kart track to a golf course. The drive-in may have just hit its heyday a decade earlier, but by the 1960s, its allure had begun to fade. Rebellious teenagers, not families, became the apple of the film industry’s eye in the rollicking ’60s and ’70s, and in 1977, VHS tapes landed in American homes, offering the chance to watch movies without leaving your couch — and forcing countless drive-ins out of business as profits plummeted to below the value of the land the theaters occupied.

A couple of weeks ago, I found myself at mass at the Basilica of the Sacred Heart. I was hesitant to go alone, but it had been too long, and I decided the twilight mass would be less full. I was wrong. The basilica was packed. I relaxed as mass proceeded, smiling at the baby a few pews in front of me and at the elderly couple holding hands beside me. When the young priest began his homily on the Good Samaritan, I couldn’t help but laugh. His pivotal story was about a “drive-in service” he’d attended at a converted drive-in theater in Minnesota — what he referred to as “car mass” to the chuckling pews. His message was about not judging people whose church experiences might look different from ours, but, to me, it was a sign from God. He was either telling me that spreading the gospel of the dying drive-in was, in fact, my calling, or He was dropping hints that He’d better see me in mass from now on. Take your pick.

I stepped outside after the choir belted its final tune and the congregation clapped, watching sundressed and dress-shirted parishioners shake the priest’s hand. I thought of his description of his neighbors at the car mass. A family in a van eating Cheerios in their pajamas. A group clad in swimsuits and coverups sitting in lawn chairs. Drive-in dwellers in their natural habitat, comfortable with something bigger.

It was a hot night on campus, but there was a gentle breeze from the lake that kept the mosquitoes away. Campus Ministry tempted me with free ice cream but lightning bugs led my way to the Grotto instead. Watching the candles flicker on the wall of rock, I couldn’t help but think it was the perfect night for another type of light show.

And so I found myself in bed that evening, googling local drive-in theaters. South Bend doesn’t have a drive-in these days, but nearby Plymouth does, a 63-year-old, four-screen affair called the Tri-Way.

Like my beloved Auto 56, the Tri-Way was a 40-minute drive from my current home, and the weekend after my serendipitous basilica mass, I made my way there. The regimented operation had ushers checking for contraband outside snacks, and a line of cars that seemed to stretch halfway back to Notre Dame. It was nothing like Auto 56, yet once Toy Story 4 began to roll and I munched on my fries, it felt familiar. I worried that I would feel the typical loneliness of a solo trip to the movies, especially with family memories in the back of my mind. But I never did.

There was something oddly holy about sitting in a lot filled with fellow movie-watchers, something communal even as I sat in my own car.  I heard children too loud and too young for the regular theater giggle and call out in delight at the sight of Woody. There were toddlers dressed as Buzz Lightyear and kids fighting each other with light sabers on the playground. In line for concessions, I listened to stranger-mothers discuss the struggles of raising teens. Preteens in line at the snack bar argued, like my sister and I once did, over who would handle the money.  As my eyes welled at the end of the film, I looked beside me and saw a husband reach over to wipe the tear from his middle-aged wife’s eye.

The drive-in is more than another screen showing another video. It’s not a flashing billboard selling alcohol or underwear. It’s not a phone screen in your hand or a mammoth flatscreen hogging family photo space on the wall. It is special because, as my Virginian friend made clear, it is something that brings the community together. Drive-in theaters provide an opportunity to be comfortable, maybe in your pajamas, but also with your family and the strangers beside you and the natural reactions you share. They provide an opportunity to take a break from the rush of technology and innovation to appreciate each other. And if you take a moment to notice, they are an opportunity to be awed by the magic of movies, nature and humanity itself — in a rare mix of all ages.

As I age, alone or with family, I’ll attend Sunday mass in church, laughing at homilies and cute babies and consuming the Lord’s word and love. But for my own summer service, you’ll find me at the local drive-in theater, eating junk food and watching Hollywood stars against a backdrop of those in the sky. Both communities will lift my spirit, even if, like the bullfrog, I never earn wings.

Nicole White is a former intern at this magazine.