Kelly Gleason ’98 may not have realized it, but she has been on a collision course with whaling captain George Pollard’s legacy nearly her entire life. Her experiences and interests have been drawing her inexorably to the tragedy at French Frigate Shoals.

While growing up in Santa Barbara, California, she was fascinated with the ocean and maritime history. In her teens she worked as a lifeguard, earned her scuba certification, competed on a swim team and learned long-distance ocean swimming, which she still does. In high school she saw a National Geographic article about underwater archaeology, which planted the idea that finding shipwrecks might be a great way to earn a living.

To the adventurous adolescent, a job that required snorkeling and scuba diving off coral reefs sounded like an amazing fantasy. What’s more amazing is the adventurous adult actually achieved the dream. “I remember thinking, ‘Wow! That’s a career! That’s a job!’ And I kind of filed it away in the back of my head. I was interested in a lot of things, but this was always a nagging possibility.” 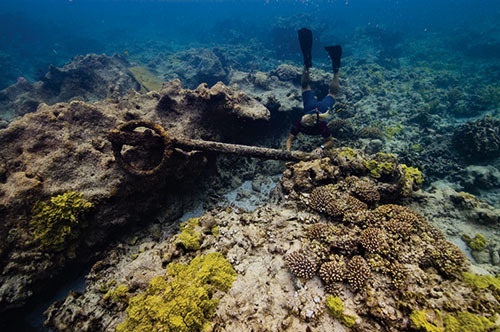 Before pursuing that nagging possibility, Gleason explored many of her other interests through Notre Dame’s Program in Liberal Studies (PLS). In fact, she still draws on it. Gleason points to her old, marked-up copy of Moby-Dick as evidence. The NOAA scientist says she’s referred numerous times to her dog-eared paperback for its technical whaling information. “I love it that I’m still using my PLS copy of Moby-Dick to interpret shipwrecks,” she says.

After Notre Dame, Gleason decided to pursue her goal in earnest, first picking up a master’s degree in underwater archaeology from the University of St. Andrews in Scotland in 2000. Among other handy skills, she learned there how to map shipwreck sites, draw artifacts underwater and design museum exhibits. She refined and added to those skills with a doctorate from East Carolina University in 2006.

With the proper credentials in hand, Gleason found her Hawaiian dream job through determination and a dash of luck. While finishing her doctoral dissertation, Gleason lined up an internship with the National Oceanic and Atmospheric Administration (NOAA) in Hawaii. That eventually led to her current staff position as maritime archaeologist for the Papahanaumokuakea Marine National Monument.

Since she began working for NOAA, Gleason has explored more than 20 shipwrecks and several World War II vintage aircraft, including a rare Brewster Buffalo fighter plane lost during the Battle of Midway.