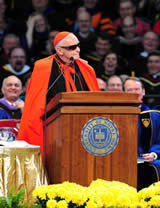 Some 2,900 bachelor’s, master’s and doctoral candidates were awarded their Notre Dame degrees on May 18, each with a different story to tell about where their commencement weekend began. For actor Martin Sheen, best known for his role as Notre Dame graduate Josiah Bartlet on NBC’s long-running series, The West Wing, it started when he was greeted by a fellow passenger while boarding a plane in Los Angeles.

“Good morning, Mr. President,” the traveler said. “Air Force One in the shop?”

Sheen the “acting former president of the United States” was foremost in the minds of those who heard him speak at the Center for Social Concerns’ Service Send-Off on Saturday and again the following afternoon as the recipient of the Laetare Medal at the University’s 163rd commencement exercises at the Joyce Center. But it was Sheen the self-deprecating, storytelling human rights activist who stole the show.

Notre Dame’s highest honor annually recognizes the faith, life and work of a Catholic who has made a profound contribution to “the heritage of humanity.” This year’s award noted Sheen’s personal ties to 1972 Laetare recipient Dorothy Day and the Catholic Worker movement, and his use of his celebrity to fight poverty and homelessness and advocate on behalf of human life, dignity and peace.

“For more than half a century, this institution has been my ideal,” Sheen said in accepting the medal. “I thought Jed Bartlet was the closest I was ever likely to come to a personal relationship with the Fighting Irish, until now. So, thanks to your dangerously generous gift, I’m afraid we’re stuck with each other, and I couldn’t be happier.”

“While acting is what I do for a living, activism is what I do to stay alive,” he continued with a lightly veiled message to graduates pondering their own path forward. “I’m often asked how I came to unite the two and the answer is simple: I haven’t a clue. . . . It was a natural progression. I learned early on that you serve yourself best when you serve others first.”

Sheen was served with a 30-second standing ovation. “I hated that moment when I realized I was following Mr. Sheen,” Shakespeare scholar Peter Holland said wryly, rising as acting dean of graduate studies to report on the previous day’s Graduate School ceremony.

“If people aren’t telling you it’s impossible, you haven’t set your goals high enough,” said Hammack, an accountancy major from Huntington, West Virginia, who distinguished himself as a student boxer, a math tutor and an author of children’s stories.

The cardinal and Bono
With characteristic charm, McCarrick acknowledged that as the retired archbishop of Washington, D.C., he hadn’t made the senior class’s list of speaker choices, which included singer-activist Bono of the Irish rock group U2. “Now as a friend of Bono, I also thought that would be a good idea, and so I did the next best thing,” McCarrick said, sliding on a pair of Bono-esque sunglasses to the students’ warm applause.

“He asked me to tell you to choose your enemies carefully, because you will be defined by that choice,” McCarrick said. “He suggested that oftentimes our enemies are within us, and he volunteered that his enemy had been indifference.”

The following Sunday, after a Mass in Dublin marking the 10th anniversary of the opening of Notre Dame’s Keough-McNaughton Centre, the University awarded honorary degrees to the Irish poet and 1995 Nobel laureate Seamus Heaney and to Cardinal Sean Brady, the archbishop of Armagh.

Fox was also the speaker at the Graduate School’s commencement. She asked the degree candidates to consider another meaning of the word “graduate”: a container divided into marked intervals used for measuring. Similarly, a scholar is “a vessel always pursuing truth and measuring her findings against an ultimate standard,” she said.

But it was the outspoken son of Catholics from Spain and Ireland who brought the academic year full-circle by recalling the topic of October’s Notre Dame Forum on Immigration. Sheen concluded his remarks with an impassioned plea on behalf of immigrants and a thunderous recitation of Emma Lazarus’ 1883 sonnet, “The New Colossus,” famously engraved on a plaque at the base of the Statue of Liberty and best known for the phrase that begins, “Give me your tired, your poor.”

University Provost Thomas Burish presented Sheen with one last parting gift: a Notre Dame sweatshirt identical to the one President Bartlet wore in The West Wing series finale. “We give you this gift with the expectation that you’ll wear it in your next television show,” he said.