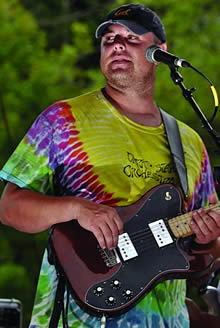 In September, baby Bella Rose Thompson will experience one of life’s classic lessons: Music festivals can be awesome.

If the 8-month-old wails her dislike, she’ll have plenty of years to change that opinion. Because a music festival is certain to be on her family’s annual go-to list for the foreseeable future. And she can thank her father, uncle and great-uncle for that.

Bella’s proud father Ryan Thompson ’00, his older brother Eric, and their uncle, Scott, musicians all, make up RYET Productions. The company’s sole business is the organization of the Head Jamz Music Festival, a Labor Day weekend fest on the banks of the Red River in Adams, Tennessee.

The genesis of RYET, and the festival it spawned, goes back to another life experience. Ryan and Eric, who grew up outside of Indianapolis, frequently attended nearby musical festivals.

“We got to experience live music all the time,” says Ryan. “That kind of started my brother’s and my passion for live music.”

At some point post-college — perhaps for Ryan it was when his medical sales work at Merck became a “day-to-day grind” — the Thompsons began to toss around the idea of starting their own music festival.

Part of that talk, says Ryan, came about because of their disenchantment with how music festivals were changing. “The trend is toward more and more people,” he says. “Festivals lost the intimacy that to me a music festival is all about.”

With Ryan in Tennessee, Eric in Indiana and Scott in Texas, each playing in a band and with 55 years of music experience among them, and each feeling they had learned from their own festival-going experiences, they reached an agreement. “Let’s go ahead and do it.”

From the start of RYET Productions, what Ryan calls “a virtual business” since most of its work is done via phone, the family organization pursued one vision: “We wanted those who come to the festival to have the ultimate experience.”

To assure that, the Thompsons first focused on festival size and location. Rather than shoot for hundreds of thousands of people, they concentrated on keeping the festival small, wanting a community feel.

The choice of location was a response to festivals held in fields where, Ryan says, “there wasn’t much else to do.” Their chosen spot offers camping, an 18-hole disc golf course, and swimming and canoeing on the Red River. The planners also added such special events as morning yoga, light shows and glass-blowing demonstrations.

And, of course, music.

As the name implies, Head Jamz is a jam-based festival with an improvisational feel. Although he’s too young to have been there, the 33-year-old Ryan hopes the festival hearkens back to the San Francisco scene of the late 1960s, with a Grateful Dead, Quicksilver Messenger Service, Led Zeppelin vibe.

Bands featured in the previous two years of the festival included the Emmitt-Nershi Band, with a country-bluegrass feel; New Mastersounds, a British funk group; and the Southern rock rumble of The Captain Midnight Band.

Ryan says choosing bands for the festival is one of the company owners’ favorite tasks. “I get to see stuff that is awesome.”

Awesome also might describe the amount of work required to put together a three-day event. The logistical checklist overseen by the Thompsons and a core group of 10 to 15 volunteers includes artist relations, booking, marketing, operations, web design, audio/video production, vending, sound/light production, security and hundreds of other details that can make the difference between a successful festival and disaster.

Disaster almost was on the agenda last year, when spring flooding put the festival location under about 50 feet of water. The campground owners, says Ryan, managed to repair all the buildings needed for the festival, so everything was in shape when 1,000 music-lovers arrived for the September jam.

Ryan says the “tons of work” paid off. “The response of the audience and crowd has been fantastic.”

Reviewers have concurred. “Between the stellar performances, great people and vendors, location on the river, and surprisingly affordable price, you really can’t go wrong,” wrote Bryan Flanagan in the Roving Festival Writer webzine.

Future Head Jamz plans do not include a lot of audience growth. The goal is to top out in the 2,500 to 5,000 range, says Ryan. The RYET team does hope, however, to eventually earn enough to attract some acts they can’t currently afford.

A continuation of the community vibe remains at the top of Ryan’s wants. He and his wife, Gia, after all, always want Bella to feel at home.