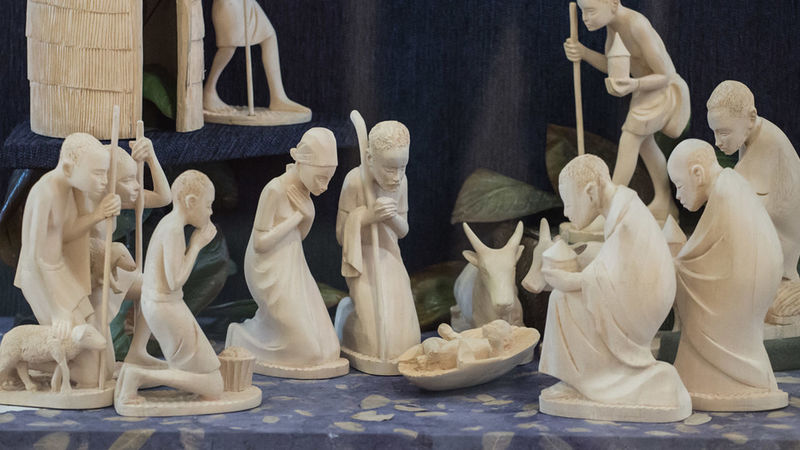 Editor's Note: This piece is part of "12 Days of Classics," a holiday series drawn from the magazine's archives and published at magazine.nd.edu from Saturday, December 22, 2018, to Wednesday, January 2, 2019. Merry Christmas!

The truth is, I didn’t want to attend the crèche pilgrimage.

It was a December afternoon, the second Sunday of Advent. There were bills to pay, baskets of laundry to fold, the Colts on television and a NFL playoff picture taking shape. There was a couch, a blanket and a little patch of winter sun, speaking in unison a word I could barely hear but am pretty sure was nap.

A nap versus nativity scenes from around the world? To me, the choice was obvious.

But my kids had already convened in the front hall to pull on coats and shoes. My wife, Alicia, smiled at me and opened our door. I thought of Jeremy Northam’s Mr. Knightley telling Gwyneth Paltrow’s Emma how he doesn’t want to go to the winter ball. I just want to stay here where it’s cozy.

All to no avail. So we drove to Notre Dame and pushed our way into the crowded and toasty lobby of the Eck Visitors Center. We arrived in time to catch the first notes of “Mary’s Boy Child,” sung by a Glee Club detail in four-part harmony.

There atop a pedestal and inside a glass box was the most curious nativity I’d ever seen. Carved by hand out of a rich, dark wood and polished to a luster, the customary figures were all present. Three kings, a few humble shepherds, an ox, donkeys and a pair of Bactrian camels waiting reverently nearby, all before a simple wooden shelter. Inside, a Manchurian couple stood on either side of the tiny babe resting in the manger. The most fanciful carvings were fig trees, which framed the scene like giant, petrified bonsai.

I found a program and learned that Chinese nativities often emphasize nature’s role as our teacher. The Buddha received illumination in the shadow of a sacred fig; here we are reminded in the intimate hour of the Incarnation that the child asleep beneath the towering trees is Himself the Tree of Life.

This crèche, the program explained, was produced in the only Christian woodcarver’s shop known to exist in a land not friendly to Christianity. Its maker is anonymous.

Humbling. What do I give back to God? Despite myself, I could feel my heart beginning to thaw.

The Chinese crèche is one of 30 on display at Notre Dame through the end of January. Thirty depictions of the Holy Night from 30 different cultures representing 24 countries and five continents. Around the room, fellow pilgrims marveled at the same scene as imagined by artisans in France, Ivory Coast, Palestine, Peru and Rwanda. While the Glee Club finished with “We Wish You a Merry Christmas,” my mind played a different verse: 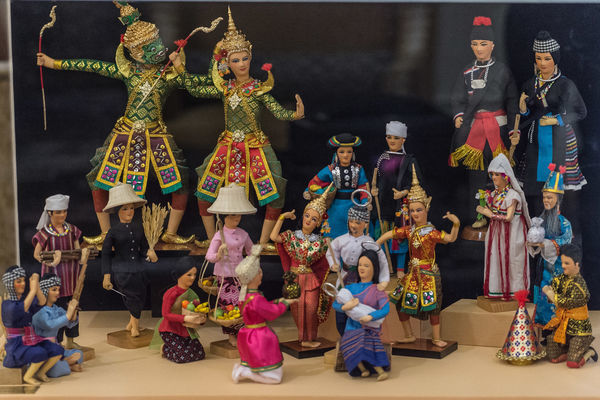 In Christ there is no east or west,
In Him no south or north,
But one great fam’ly bound by love
Throughout the whole wide earth.

John Cavadini, whose idea it was to borrow these manger scenes from the large Marian Library International Crèche Collection at the University of Dayton and display them across campus, offered a warm greeting and reflection.

“Seventeen days still separate us from Christmas,” the theology professor and director of Notre Dame’s Institute for Church Life said. “Although the world wants us to skip Advent, the Church in her wisdom reminds us that this time of waiting should be turned into a season of coming and becoming. It is a journeying towards Bethlehem, symbolized by the crèches around us.”

On our pilgrimage, we would weave our way up Notre Dame Avenue, praying the Joyful Mysteries of the Rosary and singing “O Come, O Come, Emmanuel,” pausing to contemplate the nativities on display at McKenna Hall, the Morris Inn and the Main Building. Half a dozen more awaited the most thorough pilgrims at Hesburgh Library.

Maybe I take manger scenes for granted. After all, at home we have one for everyone in the family, from the beautiful German ceramic crèche we received for our wedding to the Playmobil set my son got from his godparents to keep him from breaking ours. I understand the familiar Stations of the Cross devotion during Lent. But at first the idea of a crèche pilgrimage felt a bit contrived.

It turns out my horizons needed broadening. Italians to this day observe Christmas by visiting their local presepi, walking from one church to the next to contemplate the Virgin Birth anew in each venue. In cities like Naples and Rome, elaborate displays that imagine the Christ Child’s arrival in distinctively Italian settings may fill entire side chapels. Steven Semes, a Notre Dame architecture professor who this year will spend his seventh consecutive Christmas in Rome, has written about the vast Neapolitan display at Rome’s Santa Maria in Via, in which the Holy Family is so small and modest that it is difficult to find. City life goes on around it in a kind of “grand opera,” Semes writes. Even shadowy Vesuvius churns smoke in the background, a reminder of life’s contingencies — and our need for salvation.

The crèches on loan to Notre Dame from Dayton would fit on a side table in your living room, but each one demonstrates the same capacity to render the mystery of Christmas through the symbols, materials and colors most expressive of their own cultures. They include the work of Coptic Christians in Egypt and the Sisters of Bethlehem of Mougères, France. One was sculpted out of paste from the bark of cinnamon trees by a Buddhist family in Singapore.

Each one speaks its own language, like the curving Chilean nativity fashioned out of cow horn that evokes the nobility of even the humblest things. The crèche from Togo speaks in the music of the traditional village orchestra that welcomes the King with flute, horn, rattle, gong and drums. A Breton nativity speaks in bright glazes; the infant is swaddled in the same brilliant yellow and blue that adorns the Magi.

Most unique among the collection may be the Argentinian crèche that portrays a joyful Holy Family paddling in a canoe. This is the Flight into Egypt to escape murderous Herod, another episode from the Infancy Narratives that beckons us to think more deeply about the meaning of Christian sacrifice. Joseph and Mary welcome Christ into their lives, only to find that neither callous innkeeper nor jealous king will extend the same courtesy.

Which choice will we make? God makes himself meek and helpless and invites all of his children throughout the world to love Him. We think we’re the ones waiting. He waits for us, too, it seems.

That’s a surprisingly light reflection as I carry my youngest daughter from one pilgrimage site to the next. I could have spent this hour back home resting in my own small world, but I’d have missed this chance to carry Christ in my heart.