It is August, and the Sunday paper arrives with a thwack, sailing from the dark van window to the middle of my driveway. Today it is filled with back-to-school sale flyers, and my brain automatically creates a budget for clothes shopping. An image pops into my head unbidden: me at 14, with feathered hair and irrepressible pride, in my new purple corduroys with matching purple plaid blouse, thin pipes of gold thread shimmering through it like a blessing.

I haven’t been to school in 20 years, but the ebb and flow of the academic calendar became body memory long ago. That same knowledge allows me to drive through the hometown I visit only once a year, without knowing the directions, because my body remembers the turns and hills. 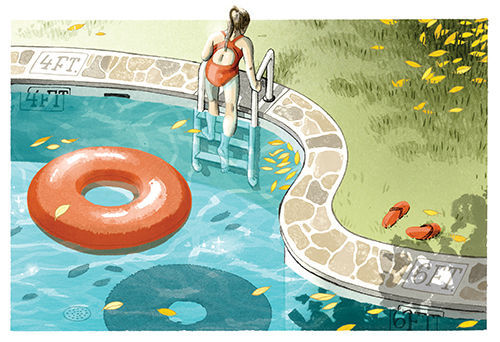 At first, going back to school in September was a distraction from the real work of living. School interrupted the days of imagining in the backyard, the sun flaring off the tall weeds in the “way back” that nobody ever mowed. We had games to play and alleys where we rode our bikes, a few dingy square blocks the stage of our real-life Narnia.

We also had our grandmother’s in-ground pool. Our mother often drove us there after breakfast in whatever secondhand piece-of-junk car we owned at the time. We arrived with watermelons and cookies. Grandmother gave us juice, graham crackers and Oodles of Noodles. She had a milk box by the back door. We looked in it every time we came over. The box never held any milk, but at least once a year we found an Easter egg.

As my legs grew longer and I began to tower over my friends, school brought welcome beginnings, middles and ends to my days. A gangly 12-year-old can only ride her bike and pretend to be in Narnia for so long, and then she must fantasize about boys and dance to Madonna in her bedroom and record the songs on cassette tape so she can play them over and over and write down the lyrics.

With a rotating cast of characters I considered my best friends, I succumbed to the structure. I became it. Schoolwork was easy. I was a reader, so I read. I was good at math, so I scored. I was a writer, it turned out, so I wrote. I found comfort in good grades, the approval of teachers and family, and the envy of classmates.

I live my life, even now, in semesters.

After college, I was adrift. Like a 4-year-old I was again free of the school schedule, but my very being had been programmed by it. In September I felt like I should be buying new clothes. In December I felt guilty for not studying for finals. I even prepared for and took the LSAT without applying to law school. I did have fun, though, studying in a drafty apartment in New Haven with Southern Comfort on the rocks as my fuel and the band James as my soundtrack, working through logic problems as if a good grade would make a difference in my life.

In the summer I felt cheated when the kids were going to Lollapalooza, so I used a vacation day — “I’m getting paid to be here right now!” — to watch Courtney Love shout from the mainstage a year after Kurt Cobain killed himself. “They called me an adulteress,” she hissed.

In 1997 I met the man who would become my husband. First I noticed his body, then his face, then his ringless ring finger. Then he spoke and told me he was a professor. He taught mechanical engineering. His work began in September and ended in May. Within a few months we were a couple. and in a few years we were engaged.

We go on vacations in the summer and during Christmas break. I help him pick out new chinos at JCPenney in August, but only every few years. He takes about two weeks to start saying, “I can’t wait until the semester is over” at the beginning of every semester.

We’ve been married for 12 years. When our children were born I succumbed to a new schedule, a biological one: feeding, sleeping, cleaning, playing. No matter the season, no matter the month, there was just one constant directive: Keep the children alive and be a good mother. I remember them cavorting in the green backyard, oblivious to the future, creating imaginary worlds of their own.

Now the boys are right where I started, fussing against the boundary of The First Day of School, grumbling about the interruption in their video game play, their wrestling, their roaring, their lying around, even their reading. Soon they, too, will be slaves to the school year. And we will go back-to-school shopping for jeans and little boy T-shirts, crayons and paper, and I’ll be right on schedule.

Kim Tracy Prince is a freelance writer in Los Angeles. Her website is kimtracyprince.com.