Chances are good you’ve heard this one before: A juggler of exceptional talent renounces the world and enters a monastery. 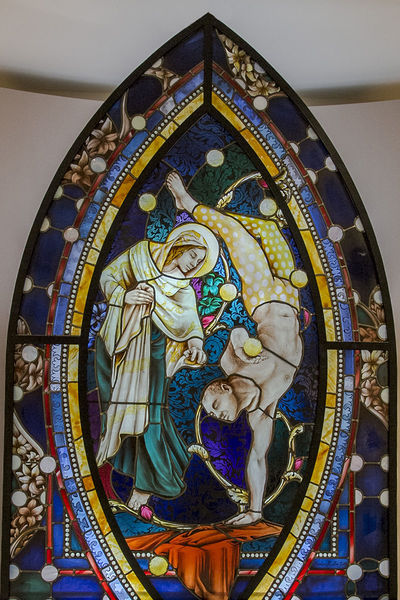 Jan Ziolkowski, the Harvard professor of Medieval Latin who created the Dumbarton Oaks exhibit, commissioned this work from the Paris-based Atelier Miller. At roughly 6 feet by 4 feet, it is only the newest rendition of the 800-year-old story, and the only one to tell it in stained glass. Photo courtesy Dumbarton Oaks. See the bottom of this page for an exhibit slideshow.

Finding himself unprepared to work, sing or even pray with his brother monks, he takes up his juggling kit and steals away to a chapel of Our Lady, where he prays in the language of his greatest eloquence. Before long, he is discovered and his offended brothers intervene on the sacrilege, only to see the statue come alive to comfort him in his soul-deep exhaustion and bless his performance.

The juggler’s name is Barnaby.

Regardless, he is a plucky orphan of 10 or 12. . . . Or, he’s a virile virtuoso at the peak of his gifts. Or a weary old itinerant seeking a peaceful place to retire and die.

He is wealthy; he is poor. He’s adored. He’s ignored.

He is Our Lady’s Tumbler. The Juggler of Notre Dame.

First told nearly 800 years ago in a poem written in Old French, then forgotten altogether in the turbulence and aftermath of the Reformation, his story was rediscovered in 1873. It has appeared in a million homily anecdotes and the pages of a major daily newspaper; in handmade art books and mass-market paperbacks; in the children’s literature of at least a dozen languages; in radio plays and Christmastime television specials; in paintings and sculpture and — at last count — three operas.

The storytellers have included a Nobel-prizewinning author whose collected works later appeared on the Index of Forbidden Books (Anatole France), a New Yorker cartoonist (R.O. Blechman), a silent-movie star (Charlie Chaplin) and an English-American poet once lauded as “the greatest mind of the 20th century” (W.H. Auden).

You may have encountered the juggler in a picture book you read in childhood, or one you’ve read to your own children. The one by Violet Moore Higgins, maybe, or Barbara Cooney, or Tomie dePaola, or the Brothers Shannon.

Naturally, the narrative inspired more than a generation’s worth of literary production at the University of Notre Dame.

“The paradox of the story is that it’s been there in all of these different media, but many of the people who have encountered it have regarded it as their own discovery,” says Jan Ziolkowski, a professor of Medieval Latin at Harvard University. “It’s remained effectively hidden in plain sight, and it’s been everyone’s personal discovery.”

And yet, the scholar says, as a lingering artifact of the Gothic Revival of the late 19th and early 20th centuries, the juggler’s tale may have been retold more frequently in modern times than any story outside of the Bible and the Walt Disney canon.

Ziolkowski’s devotion to the juggler since he first took him up nearly 15 years ago may even surpass the juggler’s to Mary. Its measure?

First up is his refreshingly witty and engaging six-volume history, The Juggler of Notre Dame and the Medievalizing of Modernity — some 2,000 pages in all — that traces the juggler’s literary lifespan, from his birth in northern France in the 1230s to his Reformation-induced coma 300 years later and on to his reawakening in a France left demoralized by its loss in the Franco-Prussian War of 1870-71.

Eager to take pride in their nation and desperate for symbols of cultural vitality, the French people went medieval. They settled on St. Joan of Arc, executed by the English in 1431; on the knight immortalized in an 11th-century epic, The Song of Roland; and eventually on Barnaby, who first captured widespread attention in Anatole France’s short story in 1891.

Ziolkowski’s next contribution is a book series published by Harvard University Press that comprises two beautifully illustrated versions of France’s short story as well as Cooney’s The Little Juggler (1961) and a coloring book featuring line art from several different editions that is ready for your illumination.

Third is a museum exhibit at Dumbarton Oaks, a rewarding but off-the-beaten-path destination for both scholars and tourists tucked away in the heights of the Georgetown neighborhood in Washington, D.C. Known for its distinctive collections of Byzantine and pre-Columbian art, the house and its grounds were gifted to Harvard in 1940 by Robert and Mildred Bliss, philanthropists and socially prominent art collectors who wanted it to become a “home for the humanities.”

“As a couple, they emphasized precisely what this show is meant to achieve, tying together past and present, Europe and the United States, and humanities and arts,” Ziolkowski, Dumbarton’s director since 2007, said in his public lecture to formally open the exhibit on October 18. “One objective of this installation is to demonstrate that humanistic research and artistic creation go hand in hand.”

The show, “Juggling the Middle Ages,” is a multimedia mix of past and present, of the contemplative and the interactive, of high-, middle- and lowbrow cultural production. It begins with an enlargement of the only image of the juggler to survive the 13th century and ends with a joyously kitschy collection of modern Marian artifacts that includes an apparition-themed toaster insert and a “Miracle Mug” that turns revelatory when filled with hot liquids.

Visitors may watch the 1957 Terrytoons animation of Blechman’s tale of Cantalbert, “a Medieval Legend” narrated by Boris Karloff, or sit on a Gothic Revival church pew and select one of several children’s books from a basket. Along the way, one of the lessons Ziolkowski hopes visitors will take with them is a clearer grasp of the medieval past and the many uses to which our imagination of it has been put in the present day — everything from the restoration or embellishment of religious landmarks (and the appreciation of certain majestic natural ones) to beer and perfume sales and idealistic political campaigns. (Remember the Kennedys’ Camelot?)

One chapter left unexplored, but which we hope to unfold in a future issue of Notre Dame Magazine, is the story’s life at Notre Dame.

At Christmas 1919, it gave its name to a new student humor magazine, The Juggler, which has morphed over the century into a print and digital literary journal. Richard Sullivan, a beloved English professor of the 1940s to 1970s, penned his own version in a one-act play. Father Patrick Peyton, CSC, ’37, the “Rosary Priest” whose cause is now up for sainthood, produced it as a radio broadcast starring Danny Thomas in the early 1950s.

Lately, Ziolkowski worries, medievalism’s net cultural production has taken a decidedly dark and apocalyptic turn. Unrepresented in his exhibit, he notes, are Game of Thrones and the many “simplistic” and dangerous ways in which white supremacists have co-opted the period into their symbolism and rhetoric. “I’m trying in my small way here to show people the other side” of the period that produced this enduring story, which, depending on the teller, is about penitence, redemption, or even joy, he says.

The newest version may be the most distinctively medieval of all — a stained-glass window Ziolkowski commissioned from an old friend he met during his undergraduate days at Princeton.

Jeff Miller, a Paris-based stained-glass maker and restorationist, enlisted the talents of his daughter, Sarah Navasse, a rising star on the international art scene, and master craftsman Jeremy Bourdois of Atelier Miller, to create the piece, which greets visitors at the museum’s entrance.

Together, Miller says, they worked as their artisanal forebears once did to capture a powerful story in a single image — in this case, the loving connection between two complementary figures: a holy woman and a humble man.

His eyes closed — he is not performing, he is praying — Miller’s juggler stands on one hand that rests on the cowl he has cast aside, keeping six balls aloft while a seventh has fallen to the floor. Her eyes closed, Mary leans forward to wipe the sweat from his forehead.

Examined up close, the colors are gorgeous: the yellow-gold of the balls, the juggler’s pants, Mary’s mantle and the elliptical aureole that surrounds them; the night-sky blues of the background; the rich, ruddy brown of the robe that represents a reluctant Church. But step back, and the deep violet and teal of the lily pattern that outlines the pair mutes into an opaque framework, honing your attention on the two serene figures and a moment of pure adoration.

“What makes for a suitable gift?” Ziolkowski asks. “What constitutes acceptable prayer? Does worship require words, or can there be a liturgy of movement, even dance or juggling? Can work be an expression of devotion?”

Good questions as we approach the Christmas season, the time of year with which the Juggler of Notre Dame has become most closely associated.

“Juggling the Middle Ages” runs through February 28, 2019. Visit the Dumbarton Oaks website for information about related events that include activities for families (October 27), a conversation with R.O. Blechman (November 3) and readings by Tomie dePaola (November 10) and Mark and David Shannon (December 15).