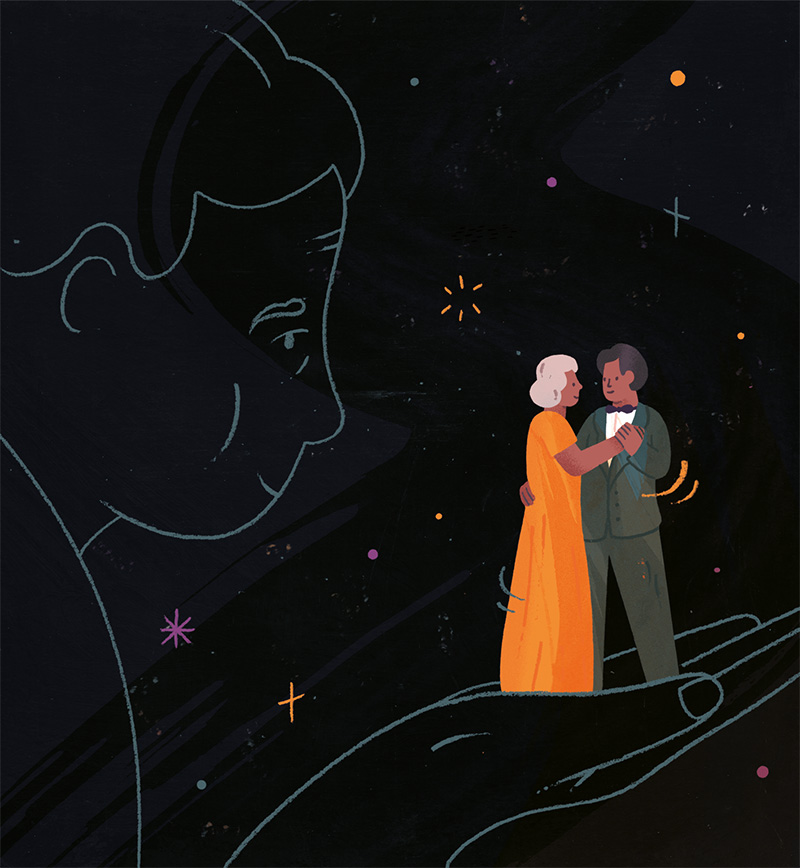 Weddings present families with hundreds of choices both momentous and symbolic. When my then-25-year-old son, Ian, asked me what song should play for our mother-son dance at his reception last fall, I stalled. He was hoping to cross an item off his list, but I needed to get that song right.

Once again, I would dance for my dead.

I lost my father to pancreatic cancer 24 years ago, but I couldn’t attend his funeral. On that day, I was nine months pregnant with Ian’s younger brother and living 500 miles away from my hometown of Dayton, Ohio. Because Ian had arrived a month early, my careful obstetrician had forbidden me to travel.

After my husband returned from the funeral, I calmly informed my doctor, “I need to have this baby — now.” David arrived healthy and beautiful a week after my father passed away. Those first few months were a consuming chaos of nursing and neediness. When David wasn’t sleeping safely in his crib, I wore him strapped to my chest or, later, bouncing on my hip for safe-keeping. Ian, my energetic 2-year-old, didn’t grasp the fragility of his little brother — or of his mom.

I craved a break from motherhood, so when The Grapes (formerly The Dreadful Grapes) came to Washington, D.C., to perform, I told my husband, “We’re there.” My sister Beth’s brother-in-law was the lead guitarist for this Grateful Dead-inspired Southern rock band, and — dang — how often do you know a rocker?

After two beers, I swayed easily to The Grapes’ folksy rock strains. Unencumbered by an infant, I felt deliciously light.

Then I had a breathtaking vision. Three familiar faces shimmered into focus. Hovering above and to the left of the lank-haired musicians, my dead were watching me.

I saw my father, of course, and his father, my Papaw, who, at 87, had essentially chosen to die two weeks before my father did, maybe to carve a path through that wilderness for his beloved son. I saw my friend, Susan, a too-young neighbor felled by ovarian cancer six months earlier. When she could still eat, I’d made her pumpkin-ginger muffins and had also taken her bouquets from my garden.

I blinked rapidly, but their faces, their presence, remained. They smiled — reveling in my joy, in my movements to the winding, mellow music. I felt I was a conduit for them to dance again on this earth. I was dancing for all of us.

Their peace, their ease, suffused me, and I danced on through the encore. (The only drugs I’d indulged in were my asthma inhaler and allergy medication. Really.)

Some 20 years earlier, when I was in middle school, my father had taught me the box step for our first father-daughter dance. It became our default dance. At my wedding, Dad wore a white, Miami Vice-style tuxedo as we adroitly box-stepped for the receptive crowd. I can’t remember what song we danced to — how I wish I could — and we have no recording of the moment.

Two years after Dad passed away, my youngest sister, Julie, married Vipal, and we embraced new dance steps. Wearing an embroidered, black kurti over slim pants at their rehearsal dinner, I gamely joined the athletic Raas stick dance from Gujarat to affirm the intertwining of our families. As the maid of honor and eldest sibling, I felt eyes upon me and the weight of family representation while I tapped my sticks together in time, twirled to tap a fellow dancer’s sticks, and tried not to trip anyone in the whirling circle.

My face sweaty, my heart pounding, I stepped outside to cool off when the lively music paused. I ached for my father. In the calm darkness, though, I felt his gratitude stream into my heart. He’d been with me every step.

Recently, I read that such experiences are called ADCs — after-death communications. About one-third of grieving people experience an ADC, usually in the first year after the death. In season two of the hit show This Is Us, Rebecca shares how Jack, her beloved, late husband, sends her a good laugh every year on the anniversary of his passing. I haven’t been blessed by yearly ADCs, although I suspect my mother has more regular visitations from my father than she’s comfortable revealing to a skeptical world.

Attempting to resurrect memories of my father, I occasionally crank up some Neil Diamond when I’m alone. I close my eyes and see Dad doing his white man’s shuffle in our baby blue, 1970s living room while singing, in his strong baritone, “Cracklin’ Rose, you’re a store-bought woman / But you make me sing like a guitar hummin’.” I sing and sway along.

Coincidentally, or maybe not, one of Ian’s favorite movies is the animated hit Coco, which focuses on the interconnectedness of this world and the next. In the film, the power of memory and love keeps the dead “alive,” so to speak, and able to pass between the two worlds on one day each year, El Día de los Muertos.

Watching Coco not long before Ian and Kaitlyn’s wedding, I felt the lack of an adequate ritual in my northern-European-mutt heritage to commemorate my dead. My father is buried on a grassy hill overlooking Dayton, but I’ve never found visiting anyone’s grave — or drawer — to be satisfying. I long for a more visceral experience.

Other cultures set out luscious food or bright marigolds, as if to lure their deceased loved ones nearer. We seem to want our dead safely tucked into heaven or earning their way there. Ghosts who linger are thought to be troubled and unable to move on because of something left undone, unsaid. The concept of dancing for our dead seems a little out there, but I’m OK with that.

To my mind, dancing is our primary means of defying death. Dance is the consummate expression of human joy and energy. It requires a coordination of hearing and movement — a balancing act we’re rarely called to perform in daily life. Our gestures, our gyrations, translate a beat and incarnate music through movement. And what are human beings but elaborate orchestrations of rhythms, pulses and beats? When our bodies stop this dance, in the broadest sense, we are dead.

So at wedding receptions and concerts, I dance on, even though — as my daughter enjoys reminding me — I’m no great dancer. And no great follower either, chimes in my husband, who still attempts to lead me. I move with the beat . . . mostly. I stay on my toes, which makes up for my poor footwork . . . usually. Yes, my rehabbed knee and creaky hip will object the morning after, but I don’t want to lie on my deathbed and think, “I wish I’d danced more.”

Over the years, of course, my dead have multiplied. Between us, my husband and I have only one living parent, and we’ve lost dear friends. During my father’s battle with cancer, my mother-in-law, Joan, was one of my rocks, even as she faced her own protracted fight with cancer on two fronts. Joan adored dancing at family weddings. Especially after a glass of Chardonnay, she had a wide, inviting smile as she elegantly swing-danced, jitterbugged and foxtrotted in her husband’s or sons’ arms. Some of her happiest moments were spent gliding across dance floors, and I knew her spirit wouldn’t miss her grandson’s wedding. Nor would my dad’s.

As the wedding approached and I chose the Paul Simon classic, “Loves Me Like a Rock,” for the mother-son dance, I felt closer to all my dead. I hoped to be a medium for them to share the joys of our family, which is still expanding, still inviting others into our swirling circle. Before Ian’s first prom, we taught him our family’s version of swing dancing, and his mad skills on the dance floor helped him to win the heart of Kaitlyn, a woman beyond his dreams.

All that’s left of my dead is the love they’ve bequeathed us — a love that celebrated our family’s past, present and future as my son and I spun across that polished dance floor.

Our elated steps defied death as we danced beyond midnight.