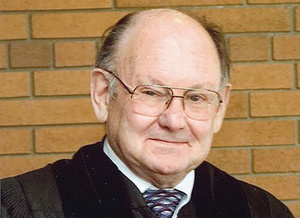 Thomas L. Shaffer ’61J.D., a longtime professor, prolific scholar and former dean of the Notre Dame Law School, influenced generations of lawyers and legal scholars to integrate their work and faith. His books On Being a Christian and a Lawyer and Faith and the Professions presented his ideas about the relationship between religious morality and the law.

“He showed me, and many others, that it was possible — and worth doing — to incorporate one’s faith with one’s law practice and scholarship,” said Professor Richard W. Garnett, the founding director of the Law School’s Program on Church, State & Society.

Shaffer also taught legal ethics and estate planning, and in 1991 he experienced what he called a conversion from classroom teaching to supervising students who served low-income South Bend residents in the Notre Dame Legal Aid Clinic. Recognizing his dedication to the public good, the Law School established the Thomas L. Shaffer Public Interest Fellowship to support students who provide services to the poor.

Professor Bob Jones, the school’s associate dean for experiential programs, said, “Tom was the spiritual center of the Legal Aid Clinic and regarded as a beloved mentor by every clinician who served there.” 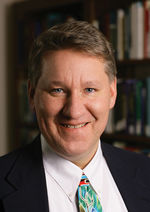 John Copeland Nagle’s enthusiasm for environmental law reflected his sense of God’s hand at work in the natural world. A member of the law faculty since 1998, Nagle published widely in the mainstream press and in academic journals on issues related to national parks and the protection of natural resources and wildlife. His teaching on those subjects extended to middle school classrooms, where he volunteered his time and expertise once a week.

“It’s impossible to separate John’s passion for visiting national parks, for writing about the wilderness and rare animal species and protection of nature, unless one looks at his heart rejoicing in the beauty and awe of creation,” said Pepperdine law professor Derek Muller ’07J.D., a former student of Nagle’s.

Named the John N. Matthews Professor of Law in 2005, Nagle also taught courses on legislation, election law, constitutional law, property law and torts, but may have been best known among colleagues and students for the care that permeated everything he did.

Law professor William Kelley said, “John was unfailingly gentle and kind, and endlessly generous — in thought, in word and in deed.” 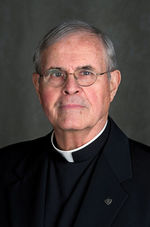 Rev. James F. Flanigan, CSC, ’58, ’63M.A. taught art at Notre Dame for many years, and his craft as a sculptor produced statues of Saint Andre Bessette at the Eck Visitors Center and Mary Seat of Wisdom in Malloy Hall, as well as the Sorin Hall chapel’s Stations of the Cross.

Flanigan also led the Department of Art, Art History & Design, and served the University as associate vice president for student affairs. As an assistant rector and rector in Breen-Phillips and Dillon halls, Flanigan’s ability to materialize in an instant wherever a rule violation might be happening earned him the nickname “Flash,” which even Father Hesburgh delighted in calling him.

When Notre Dame experienced a student-housing shortage with the advent of coeducation in the fall of 1972, Flanigan supervised a group of freshmen who lived in Old College. The 34 residents included four upperclassmen, a blind resident assistant with a seeing-eye dog and Flash himself, all squeezed into the lakeside house that dates to the University’s founding. They shared three single bathrooms.

The Golden Domer, a senior alumni newsletter, recounts the bond the Buds (as the Old College residents called themselves) forged with Flanigan. At Easter Mass, he asked them to write their sins on slips of paper. He collected them in a bowl and burned them as a symbol of their sins being forgiven.

Flanigan, who had been suffering from dementia, died March 7. He was 83. 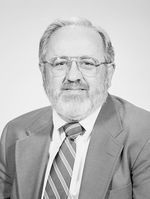 Richard A. Lamanna sought to understand life at the neighborhood and parish levels. A member of Notre Dame’s sociology faculty for 35 years, Lamanna studied race and ethnic relations, religious beliefs and practices, and urban poverty.

He organized annual trips to ethnic neighborhoods in South Bend and Chicago, introducing students to ways of life they had never encountered. Lamanna’s array of books, articles and research studies included “Search for Common Ground: What Unites and Divides Catholic Americans,” which received the 1998 Award for Excellence in Research from the National Conference of Catechetical Leadership. A 1964 study examining how anti-Catholic bias influenced young, educated voters during the 1960 presidential election between John F. Kennedy and Richard Nixon has received renewed attention in recent years as prejudice against Muslim candidates became an issue in American politics.

An Air Force veteran who became active in the civil rights movement during the 1960s, Lamanna also did extensive research throughout his career on residential and educational segregation. For his work, he received Notre Dame’s Rodney F. Ganey Faculty Community-Based Research Award and the Urban League of South Bend and St. Joseph County’s Community Service and Civil Rights Award.

A native of upstate New York and the first in his family to go to college, Lamanna served more than once as chair of the sociology department, supporting his colleagues selflessly as their endeavors enriched the University’s intellectual life.

“Dick Lamanna was a great contributor to everything in which he involved himself,” said Kevin J. Christiano, an associate professor of sociology. “He had a knack for working mostly behind the scenes, so he did not always get the full credit that he deserved for his accomplishments — and he was not vain enough to covet that type of recognition.” 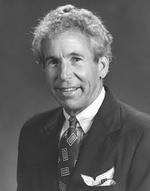 John MacLeod led the Notre Dame men’s basketball program through a period of transition in the 1990s from independence into the Big East conference. The shift occurred midway through MacLeod’s eight-year tenure as head coach, during which he steered the Fighting Irish to an appearance in the 1992 NIT championship game.

MacLeod succeeded Digger Phelps in 1991 after spending the previous 18 seasons as an NBA head coach. His 579 wins from 1973 to 1987 with the Phoenix Suns remains the franchise record.

Remembered by former players and assistants as well as by many in the community for his personal decency, MacLeod drew praise from those in the know for his coaching ability — despite a 106-124 record at Notre Dame before his resignation in 1999.

He was the 1997 Big East coach of the year, and future NBA players such as Troy Murphy and Matt Carroll ’03, who would later lead the Fighting Irish to a conference division title and NCAA Tournament appearances under Mike Brey, came to Notre Dame as MacLeod recruits.

“He represented Notre Dame the way Notre Dame should be represented,” Iowa head coach Fran McCaffery, an assistant throughout MacLeod’s tenure, said in the Tribune. “He recruited a team capable of winning a Big East . . . championship. He just didn’t coach it.”

MacLeod, who had been diagnosed with Alzheimer’s disease in 2008, died April 14 at age 81. 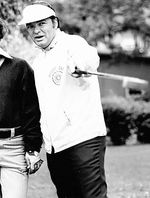 Noel O’Sullivan ’60, ’61M.A., could teach just about anybody to be a better golfer. With infectious enthusiasm and a mouthful of an accent from his native New Jersey — everything was a gravelly and boisterous “beauty-full” when he was teaching physical education classes to undergraduates for decades — O’Sullivan commanded amused attention that translated into conscientious practice of his techniques.

On pitch shots just off the green, for example, he preached swinging with a force equivalent to how hard you would toss the ball toward the spot on the green where you wanted it to land and roll toward the hole. “God love ya!” he’d say after earnest student attempts. “Beauty-full.”

O’Sullivan coached the Notre Dame men’s varsity golf team from 1973 to 1988, the first layperson to hold the position, winning 11 tournaments during his tenure. All the while, he maintained his position on the physical education faculty, teaching every activity the department offered, and served in the University’s guidance office.