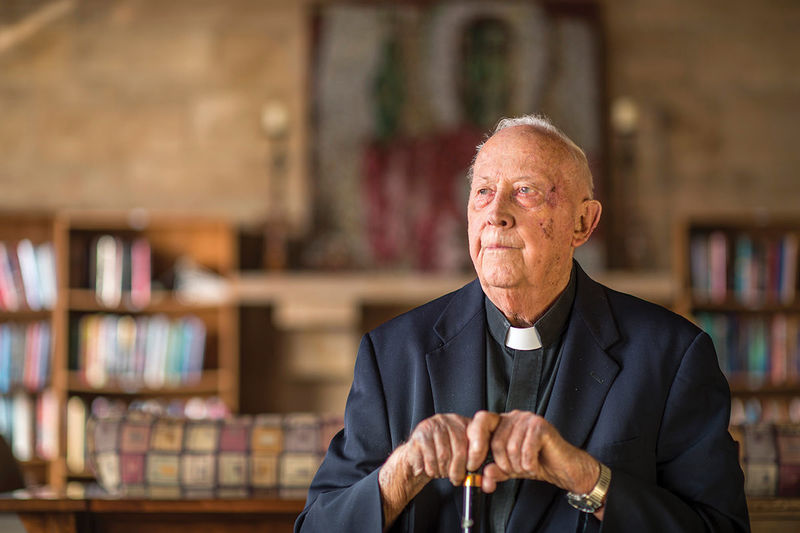 In 1974, Rev. Robert S. Pelton, CSC, ’43, smuggled out of Chile documents sought by the that country’s authoritarian military regime. The papers, compiled by a multifaith coalition, contained a list of individuals who had been tortured, kidnapped or disappeared at the hands of the Augusto Pinochet dictatorship. For the priest, the smuggling was part of his commitment to Catholic action and social justice.

Ten years earlier, Pelton had been assigned as religious superior, rector and president at Saint George’s College, a Holy Cross institution in Santiago, Chile. He encountered great poverty in that city, with slum neighborhoods packed full of people, many malnourished and lacking adequate medical care, and realized it was where he was called to serve. “You go to listen, to learn, then to act,” he recalled in a 2017 story in these pages.

An expert on liberation theology, Pelton wrote extensively on the life and legacy of St. Óscar Romero, the archbishop of San Salvador who was assassinated in 1980. He produced an award-winning documentary film, Monseñor: The Last Journey of Óscar Romero, and, in 2018, traveled to Rome to attend Romero’s canonization.

Pelton was a faculty fellow in Notre Dame’s Kellogg Institute for International Studies and founder and director emeritus of its Latin American/North American Church Concerns, a group that focuses on strengthening pastoral bonds between the churches of the two regions.

He served as chair of Notre Dame’s theology department during the 1960s, director of the Institute for Pastoral and Social Ministry (now the McGrath Institute for Church Life) during the 1970s and ’80s, and as congregational chaplain for the Sisters of the Holy Cross.

A native of Evanston, Illinois, Pelton was ordained a priest in 1949 and received his licentiate and doctorate in sacred theology from Rome’s Pontifical University of St. Thomas. In 2016, he received an honorary doctorate from the University of Portland in recognition of his career as a filmmaker, scholar, author and theology professor, as well as his lifelong service to Latin America and the Church.

When Notre Dame made its abrupt decision to enroll female undergraduates in 1972, its president, Rev. Theodore M. Hesburgh, CSC, appointed Sister John Miriam Jones, S.C., ’61M.S., ’70Ph.D., to the provost’s office, making her the University’s first high-ranking female administrator. For the next 17 years, first as assistant provost then as associate provost, Jones was a key figure — a staunch ally and advocate — in leading the integration of women into the University.

“Many men undergraduates found it hard to be welcoming,” she recalled in the 2007 book, Thanking Father Ted: Thirty-Five Years of Notre Dame Coeducation. “There was a nightly rating system in the dining hall; catcalls from the windows of the men’s halls; run-throughs in women’s halls; and something akin to non-inclusion in the classrooms.”

A member of the Sisters of Charity of Cincinnati, Jones threw herself into her new role, helping the first generation of women assimilate — and changing the school’s traditional culture. She also handled faculty appointments, supervised affirmative-action activities, provided for the needs of students with disabilities and served as the liaison to the ROTC programs. In 1987, she presided over the planning of the inauguration ceremony marking the beginning of the presidency of Rev. Edward A. “Monk” Malloy ’63, ’67M.A., ’69M.A., and she later chaired both the sesquicentennial celebration and the standing committee on commencement exercises.

Jones left Notre Dame in 1989 to become provincial of her order’s Central Province. Ten years later, she was one of the first individuals recognized with a plaque on the University’s Wall of Honor inside the Main Building. It reads: “In 1972, the University underwent a historic change from an all-male to a coeducational institution of higher learning. Sister Jones directed that transition with an impressive blend of imagination, grace and humor.”

“Sister John Miriam was one of the pivotal figures in Notre Dame’s transition to coeducation,” Malloy said after her death. “She was full of wisdom, kindness and enthusiasm. We will miss her deeply.”

In 2007, a “Thanking Father Ted” reunion on campus began with a luncheon honoring Jones. In her tribute to Hesburgh, she wrote: “Indeed, women do belong. They have made an unequaled contribution to Notre Dame. Today the university is a truly human place largely because of its women students.”

Michael “Mic” Detlefsen grew up in Fremont, Nebraska. His father was a meat inspector and his mother was a homemaker. He attended Wheaton College on a football scholarship — until an injury ended his athletic career. He then turned his attention to physics and later earned a doctorate from Johns Hopkins University, gaining international acclaim for his work in mathematics and philosophy.

Detlefsen, who died in October at age 71, was Notre Dame’s McMahon-Hank Professor of Philosophy. He taught at the University for 35 years, was the longtime editor of the Notre Dame Journal of Formal Logic and had been a recipient of the University Research Achievement Award and the Rev. James A. Burns, CSC, Award for his contributions to graduate education.

His research focus was logic, epistemology and the confluence of math and philosophy. “Notre Dame has been one of the best places in the world to study the philosophy of mathematics for decades, and that is very largely due to Mic’s importance and influence in the field,” explained Jeff Speaks ’97, professor and chairman of philosophy. “He has been a leader in our department, and a mentor to students and faculty alike. It is difficult to imagine the place without him.”

Known for his dedication to his Notre Dame graduate students, he also held visiting professorships at the University of Split in Croatia, the University of Konstanz in Germany and the Paris Diderot University in France as well as the prestigious senior chaire d’excellence at the Agence Nationale de la Recherche. His writing, teaching and scholarship were instrumental in bringing together the philosophy of mathematics communities in Europe and North America and enriching the development of the field in France.

Despite the elevated realms of his academic explorations, Detlefsen stayed true to himself and his Midwestern roots. He could tell stories of his job as a Chicago garbage man, of family canoe adventures and the day he spotted a young woman named Martha in the student lounge at Wheaton — a love-at-first-sight memory that led to 50 years of marriage, three children and six grandchildren. Students, friends and colleagues knew him as an expert gardener, fine cook and genial host at festive dinner parties. He was a man of deep faith, comfortable in blue jeans, happiest at home.

President Ronald Reagan appointed John G. Keane as director of the U.S. Census Bureau, and on December 20, 1983, U.S. Supreme Court Justice Sandra Day O’Connor swore the 1952 Notre Dame graduate into office. He would send O’Connor a red rose each year on the anniversary of that ceremony.

Jack Keane testified before Congress 43 times as head of the bureau, led its efforts with the World Bank, International Monetary Fund and U.S. Agency for International Development, and worked with officials from the Soviet Union, China, Egypt, Saudi Arabia and other nations. He left the bureau in 1989 to become the Martin J. Gillen Dean of Notre Dame’s business school.

In his 12 years as dean, Keane significantly increased the size of the faculty, nearly doubled the school’s research funding and moved the college into a new building, which greatly enhanced its academic enterprises. He also started the Student International Business Council to fulfill his “peace through commerce” vision. After stepping down as dean, he continued to teach as the Korth Professor of Strategic Management, furthering his research interests in corporate strategy and international management.

A native of Fort Wayne, Indiana, Keane attended six universities, earning four degrees, including a stint at Syracuse University where the U.S. Air Force had sent him to study the Russian language that he put to use in military intelligence. His international travel gave him a global view that he applied to government service, academia and the private sector.

Keane was a member of the Knights of Malta and an avid runner and softball and basketball player. Not surprisingly, he could supply the population of any city, could do complex math in his head and was adept at word games and puns. Married to Rosemarie Halloran Keane for 60 years, the devoted family man with three children and three grandchildren died October 24 at age 89.