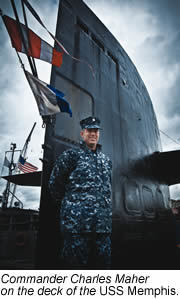 Maybe no man is an island. But pack 135 of them together inside 6,000 tons of airtight steel suspended hundreds of feet beneath the surface of the ocean, and collectively that’s what they become.

Enclosed within the walls of the USS Memphis fast-attack submarine is a self-contained universe about the size of a football field. It has no fresh air, no sunlight and traditionally — until a policy reversal by the U.S. Department of Defense in April — no women. Exiled for months on end, the unit’s existence is predicated on its ability to keep you from knowing that it exists at all. That’s the life of one of the 76 nuclear-powered, missile-armed islands which form the invisible defense against anyone on the high seas who would wish to do the United States harm.

To function as one harmonized unit, a submarine requires a hierarchy of command capped by the authority of one person under whom all order follows. At times the most isolated man among the crew is its captain — the person solely responsible for the performance and safety of the submarine and everyone aboard it. On the Memphis, that duty rests with Commander Charles Maher ’90, who took command of the $3 billion machine and its crew in January.

“Being in command is a great level of responsibility and accountability that is not associated with any other job,” says Maher. He is one the U.S. Navy’s newest commanders in the long chain of those who have gone before him and who will come after, a group that includes three other Notre Dame alumni: commanders Mark Prokopius, William Houston and Robert Clark — all from the same Class of 1990.

None of that matters to the crew of the Memphis, however. To them, Maher is the beginning and end of their isolated existence, the anchoring force directing orders as his crew simulates anti-surface and anti-submarine warfare situations for several days with the Harry S Truman Strike Group off the Atlantic coast of Florida. The in early April was a part of the Memphis’ evaluation to certify for deployment three weeks later to Rio de Janiero to take part in UNITAS, a two-week scenario training event that brings together a coalition of North, Central and South American navies. Started in 1960, it’s the longest running multinational naval exercise in the world.

It’s rare for crew like that of the Memphis to ship out so quickly; the certification process usually takes nine months to a year. It took Maher’s crew about four months. “It says a lot for the team to take up the challenge and get it ready,” says Maher.

Much of Maher’s day is spent leading that process of critically monitoring the actions of the other officers on board and holding them accountable for their decisions. It’s checking and rechecking innumerable charts; reviewing cryptographic material; monitoring longitude, latitude and depth zones; and overseeing the performance of the nuclear reactor and the safety of those around it. When you’re on your own surrounded by ocean in a vessel whose motion is enabled by harnessing the same power responsible for unleashing the most destructive man-made force in human history, perfection has never been more paramount.

“It’s an inherently dangerous occupation — essentially you’re taking a ship and purposefully sinking it,” says Prokopius, who commands USS New Mexico. “If there’s any casualty on board, you’re under water. There’s not a whole lot of places you can go.”

You might say it’s an alternate universe. Time is not measured by the sun. Days are 18 hours, broken up into six-hour shifts of maintaining watch, training and maintenance, and sleep. Pressure is measured in atmospheres that crew members even create. By periodically scrubbing the submarine’s interior walls with a chemical compound called amine, they remove the excess carbon dioxide created through respiration before triggering a process that splits ionized water molecules to create breathable oxygen. And they all share every last bit of it, as the bulk of the crew is tucked away into a living space about the size of a three-bedroom apartment.

From the top down, all submariners share a bond. They’ve all chosen to be there, and they’ve had to qualify to be there. The pride of a submariner is worn on his breast: the submarine warfare insignia, or “dolphins,” as they call it. In short, it means that should fate ask it of me, I will save your life.

It’s the captain’s job to maintain that cohesiveness. In part, it’s reinforced through the constant scrutiny of performance and, if required, discipline. But ensuring proper execution isn’t always about giving orders. Sometimes it means walking off the boat in port on a Friday night, hoping to have a few hours to yourself, only to meet a sailor who has a problem he needs help in solving.

“For him it’s the most important issue, so I’ve got to take the time to make that the most important thing to me,” says Maher. “Whether I have alligators chomping at my ankles, I have to respect those needs and do the right thing for the sailor — but also maintain that balance, keep the big picture in mind and keep the ship safe.”

That task requires navigating the unknown. Unlike a surface ship, a submarine can’t risk receiving a radio communication whose energy emission could compromise its location. It only comes up shallow enough to receive a broadcast related to its mission about every 12 hours before diving deep again. As a result, the captain has a unique level of autonomy to command the boat as he judges best.

“There’s an immense amount of professional pride that your bosses trust you enough to send you out there,” says Houston, whose wife, Colleen ’90, was recently called up from the Navy Reserves — at the same time he’s winding down his command of the USS Hampton.

Hiding from the enemy at sea also requires hiding from friends and family ashore, a task all the Notre Dame commanders face as every time they ship out on a mission they each leave a wife and children back home. It means pressing pause on family life, missing birthdays, Christmases, First Communions and even funerals. Even when their duties allow them daily email communication, there’s only so much you can give back via radio transmission.

“What gets frustrating is you can’t do anything,” says Prokopius, whose wife, Kathy, is an ’89 Saint Mary’s graduate. “You can’t fix the washing machine or fix the car. You can’t study science with the 15-year-old. You’re kind of helpless out there on the home front. That’s the big stress with the family you leave behind.”

With all there is to worry about within the vessel walls, however, there isn’t always time for one’s attention to drift beyond the next day, hour or minute. It’s a routine that grinds down on even the most rigorously trained men.

“When you’re doing a mission that’s highly sensitive, you know you have to be on razor’s edge all the time for a month and a half,” says Maher.

The only first-hand visual confirmation that the outside world still exists comes sometimes only twice a day and only through the small pane of a periscope. This routine part of any day is also inherently dangerous, as there’s no guarantee of what you’ll see. It could be the sun rising over the Rock of Gibraltar — or it could be several dozen boats, perhaps filled with fishermen. Even when you least expect it, those times when, as Prokopius says, “the hair on the back of your neck starts standing up,” you always have to be prepared to act appropriately.

“Every commanding officer has been in that situation,” Prokopius says. “You end up having to trust your instinct.”

Other times, the crisis comes from within your own boat. Like when the Hampton was performing a casualty training drill in the middle of the sea, and Houston’s engineer lost the tip of his finger on a piece of wire used to lock a valve. At that point it was no longer a drill. Houston had to get the sub into position for the engineer to be picked up and flown back stateside for medical care. It’s not something Houston had specifically prepared for, but that’s when the instincts ingrained into him over time kicked in.

For Maher, those instincts were honed over almost two decades of submarine training and service to prepare for the position he now commands. When he exchanged salutes with his predecessor in his home port of Groton, Connecticut, and was handed the helm, in some ways Maher’s entire naval career fulfilled its purpose. Following his initial nuclear power and officer training, as he rose through the ranks from junior officer to commanding officer, he faced constant critiques from his superiors. From spot checks to evaluating drills, every decision was analyzed, graded and, when inevitably necessary, corrected.

It’s no accident that Maher — like the other Domers before him — finds himself in charge. Notre Dame has maintained a strong ROTC presence on campus long after it served as a World War II hub for the Naval Academy, and submarines have been a primary beneficiary of that commitment. Notre Dame’s NROTC is recognized as one of the premier producers of nuclear-trained officers nationwide. Of course, as at least one submariner knows, that respect hasn’t kept other sailors from editing incoming communication reports to falsify Notre Dame football scores.

In addition to the commanders, the University’s NROTC also has produced former commanders and colleagues of the current group, such as captains John Mosier ’88, director of intelligence for the Pacific fleet of submarines, Mike Ryan ’85, commanding officer of the Pacific fleet’s submarine training center, and Kevin Brenton ’85, squadron commander for the Atlantic fleet’s ballistic missile submarines. It’s a commitment that comes from the top down, as one of a handful of programs around the country — including engineering powerhouses like Duke, Purdue and Georgia Tech — that are always commanded by a former submariner, currently Captain Dale Nees.

Today’s Notre Dame submariners have run into each other from time to time over their careers. And they’re all people whom Maher couldn’t be more proud to have his name associated with. “The technical rigor and stature of the ND guys is definitely something that’s remarkable,” he says.

Nonetheless, few choose to undertake the commitment required to stand in Maher’s still dutifully polished shoes. Of the junior officers on his first sub, Maher is the only one still in the Navy. But, to those who have gone before him, the reward of command is well worth the wait.

“It’s the pinnacle of a naval career,” says Captain Mosier, who commanded the USS Honolulu from 2006-07 before it was decommissioned. “We say that, and it’s absolutely true.”

Tim Dougherty, who interned at this magazine, is a writer living in Washington, D.C.