When a customer popped into Friends by Design, asking when the fashion boutique would start displaying swimsuits for sale, owner Susan Mason ’87, ’96MBA gave her a definitive answer: “Never.”

Selling bathing suits does not fit the vision Mason has for her specialty women’s clothing shop in downtown St. Joseph, Michigan. “I want you to feel great when you walk out,” she says, “and not feel disappointed in your shape or size.” And no woman trying on swimsuits, she notes with a grimace, ever walks out of a fitting room feeling good. 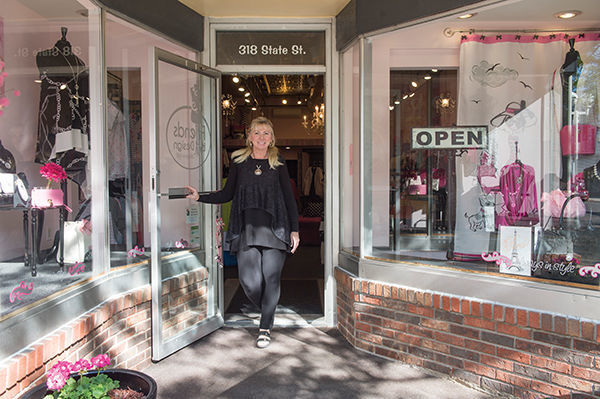 The entrepreneur herself is trying on something new these days, however, and she’s thrilled with the fit. “I am the epitome of the American Dream,” Mason says. “I got a chance to do exactly what I love.”

Historically, how one achieves the American Dream has not been considered akin to winning a lottery. Instead, hard work and sacrifice are regarded as part of the rugged road that can lead to happiness and success. In Mason’s case, her trek has included additional education, a major career change and long hours. “It was just a journey,” she says.

The trip started after her 1987 graduation from Notre Dame with a job as an assistant buyer at Lord & Taylor in New York City. For seven years, she was an executive in retail, finally landing in Chicago. “I decided that if I wanted to advance my career, I needed an MBA,” she says, and she returned to Notre Dame with the plan of transitioning to consulting for large retailers.

“I never planned to work in banking,” she says, “but that was the job I took.”

It was a career that lasted 18 years, and she lived in Michigan, Illinois, Ohio, Rhode Island and again in Illinois. Working as a recruiting executive also included “nonstop travel” and 80-hour weeks. But corporate America began to take its toll on her. “If I never see a Blackberry again, I’m totally fine with that,” she says wryly.

The hard work did come with financial benefits. In the 1990s, Mason started spending time in St. Joseph, Michigan, a popular weekend lakeside spot for Chicago residents. “I loved it,” she says. And three years ago, at age 48, she took a hard look at her life. “I felt like I needed to pursue a passion instead of a financial goal,” she says.

One Sunday in 2014, as she was returning to Chicago from a relaxing weekend, the nagging desire she’d had for almost a year to start a retail business in St. Joseph became too insistent to ignore. “I knew that’s what I wanted to be,” she says of the entrepreneurial life. As she drove, she wondered, “Why am I going back to Chicago after this weekend?”

She did go back, and she completed two crucial tasks: hand in her six-month notice and put her Chicago brownstone on the market. The house sold within a month and her job responsibilities ended that autumn.

Once you have the courage to make a decision, she says, “it’s amazing how . . . things will start to fall into place.” 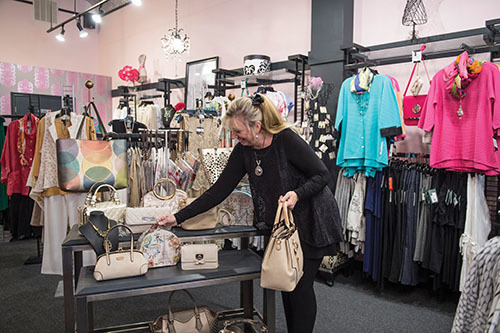 That statement speaks to Mason’s humility, but a longtime friend of hers has a different view. “She has an incredible work ethic,” says Sharon Keane ’84, the director of professional and academic programs for the Notre Dame Alumni Association. Mason, says Keane, had the discipline, drive and resilience to stay on course through the many zigzags of starting a business. “She was going to make it work.”

As it sometimes does for entrepreneurs, however, fulfilling a dream can require a bit of luck to go with the hard work. The retail space in the three downtown blocks of St. Joseph was all occupied, and four boutiques already called the small resort town home. So Mason hit the streets, asking shop owners if they might lease their space. That’s when the luck struck. One of the boutique owners had been thinking of quitting, and she agreed to Mason’s offer to buy her out. They made a deal that the business owner would close her store in December of 2014, and Mason would open her revision of the shop in March 2015, with the previous owner serving as a consultant to Mason for a year.

So the planning began, from basics like naming the shop and choosing its décor to deciding on the niche it should fill. And details, lots and lots of details, from settling on brands to fixing a price point to determining store hours. Some choices were easy for Mason. “I picked brands that I’ve worn for years,” she says. She also avoided items requiring dry cleaning or ironing, for a simple reason other women can relate to. “I don’t like to dry clean, and I don’t like to iron.” And, of course, there was that no-swimsuits as well as a no-blue-jeans policy. “It should be a stress-free environment,” says the woman whose own cheery demeanor provides an instant welcome for customers.

One decision she made means shoppers should grab what they like when they see it. “I only buy one of each size,” she says, along with one of each scarf and one of each accessory. “I think customers value that,” Mason adds, as they don’t have to worry overmuch about seeing someone else wearing the same clothes they are.

Once she opened Friends by Design as planned in March 2015, Mason found that while her MBA classes gave her the foundational knowledge to run a business, she was sometimes clueless about other aspects of owning a boutique. “How much money should you spend on an ad? How many employees should you hire?” she says of a couple of the issues that caught her off-guard. “Nobody tells you those kinds of things.”

This March, Mason celebrated her successful start by opening the seasonal shop for its second year in business; like some other stores in St. Joseph, it is closed from late December to early March.

The entrepreneur spent the winter break visiting her mother in Florida and making buying trips to Las Vegas and Chicago.

“I wasn’t going to work 80 hours a week again; not fall back into that track,” she says. But Mason admits that when she’s not there, she thinks about the shop constantly. “It’s part of who I am now,” she says. “I didn’t think I was going to love it as much as I do.”