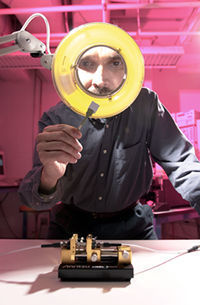 Last fall while many people were worrying where the next anthrax or other terrorist attack would occur, Alan C. Seabaugh was busy inventing a countermeasure: a cheap, credit-card size analyzer capable of detecting and measuring chemical and biological toxins.

Seabaugh, Notre Dame professor of electrical engineering, designed a semiconductor chip for the analyzer, which he envisions police, fire and other public health workers using to identify any of the thousands of substances that might be released in a terrorist attack or an industrial accident. The device also would calculate the strength of the toxin and map the boundaries of the danger zone — and do it all for about the cost of a pocket calculator.

Under Seabaugh’s scenario, immediately after arriving at a potentially contaminated scene, public safety officers would collect samples of all suspicious substances and inject them into the device. The analyzer would then automatically pump the unknown substance into a mixing chamber; mix it with a pre-loaded reagent; irradiate the reacted compound with microwaves; search the emitted signals for a “signature” characteristic of a specific toxin; and clean itself to receive the next sample. Analysis times would vary, Seabaugh says, depending on the molecular complexity of the subject being tested, but bench tests verify his belief that any substance could be conclusively identified within minutes. By contrast, current procedures require several days or weeks to transport samples to a central laboratory and conduct more conventional chemical or biological analyses.

Seabaugh says he first began thinking about the life-saving value of on-site detection devices after reading Richard Preston’s The Cobra Event, about a bioterrorist attack. Events such as the Aum Shinrikyo cult’s nerve-agent attack on Tokyo’s subway system in 1995 demonstrated that fictional thrillers could easily be transformed into tragic reality. Seabaugh’s expertise in microscopic or nano electronics convinced him of the feasibility of portable, inexpensive, yet highly accurate microwave detectors to help deal with such attacks.

Seabaugh proposed the analyzer concept in response to a call for anti-terrorist technology issued by the United Engineering Foundation in early 2000. The 98-year-old, not-for-profit foundation underwrites grants and conferences to foster advancements in engineering arts and sciences. His proposal was one of only four selected to receive a $25,000 grant out of 920 submissions. The College of Engineering provided an additional $8,000 in equipment support.

A research and education team composed of Seabaugh, 12 graduate students and two undergraduates developed the process to cut fluid transport channels into the microchip. They then fitted processing chambers, detection circuitry and other components onto the chip’s domino-size surface.

With the design now essentially finished, the team is concentrating on an even more daunting task: discovering an individual chemical “tag” for every biological or chemical toxin that might be encountered and then loading this data into the microchip’s memory.

Despite the magnitude of this task, Seabaugh is confident his team will produce a fully functional prototype by year’s end. He estimates that manufacturers will be able to mass-produce the microchips for $1 each. Allowing an additional $4 to $6 for associated components and a reasonable profit for the manufacturer, he says, the completed analyzers could sell for $12 to $15.