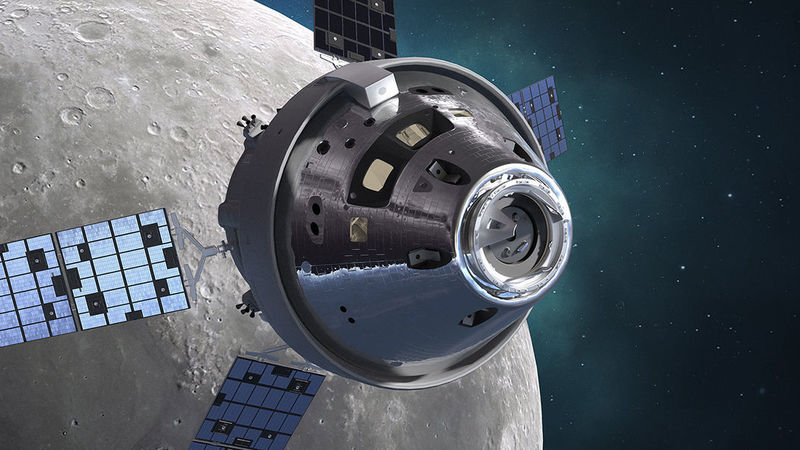 Before he answers any questions, Mark Kirasich wants to clarify the nature of his job. “I am NASA’s Orion program manager,” he says, presuming — correctly — that emphasizing his employer’s name would hold particular significance for his alma mater’s quarterly magazine.

Because, as it turns out, another guy occupies an equivalent position with Lockheed Martin, NASA’s main contractor on the Orion deep-space exploration project. His name is Mike Hawes. “And Mike, believe it or not, is also a Notre Dame graduate,” Kirasich says. The two engineers and their teams work together every day on the development of a spacecraft intended to transport humans to Mars.

Kirasich ’82 mentions the Notre Dame connection so he’s not singled out as the lone Domer leading the country’s next generation of human space exploration. It’s nice of him to share the credit, although Hawes ’78 now has to find time on his calendar for an interview. “I may have to cancel a meeting with Mark!” he (probably) jokes in an email to schedule the conversation.

A NASA lifer, Kirasich started at the Johnson Space Center in Houston after completing a Stanford master’s degree in 1983, working on projects such as the space shuttle and the International Space Station. Hawes worked at NASA for 33 years before moving from “the government side” to “the industry side” eight years ago, acquiring quite possibly the coolest job title on Earth: vice president of human space exploration.

The two have seen public interest and investment in space exploration wax and wane. The moon landing was a long time ago — 50 years this July 20, to be exact — and the Apollo mission that produced that giant leap was shuttered after just a few more lunar excursions. People went from slack-jawed awe to a shrugging, “been there, done that” attitude at hyper-speed.

Since 1972, no astronaut has ventured beyond low Earth orbit, a couple hundred miles from Earth’s surface — never again the 238,000 miles to the moon, let alone the millions to Mars. Kirasich and Hawes built their careers on those low Earth orbit projects. The missions were massive, complex undertakings, and the people who worked on them never mistook them for minor simply because the distances from Earth were shorter.

Still, the grandeur of returning to the moon and establishing it as a layover en route to Mars stirs the imagination in a way that circling the Earth does not. They, along with the rest of the world were transfixed — Hawes at age 13, Kirasich at 9 — when Apollo 11 landed on the Sea of Tranquility in 1969, the grainy television images clarifying their visions of a life’s work.

Kirasich went outside with his father and sister that evening to find out if they could see Neil Armstrong and Buzz Aldrin up there. “We couldn’t,” Kirasich says, “but that’s what motivated me to become interested in the space program.” 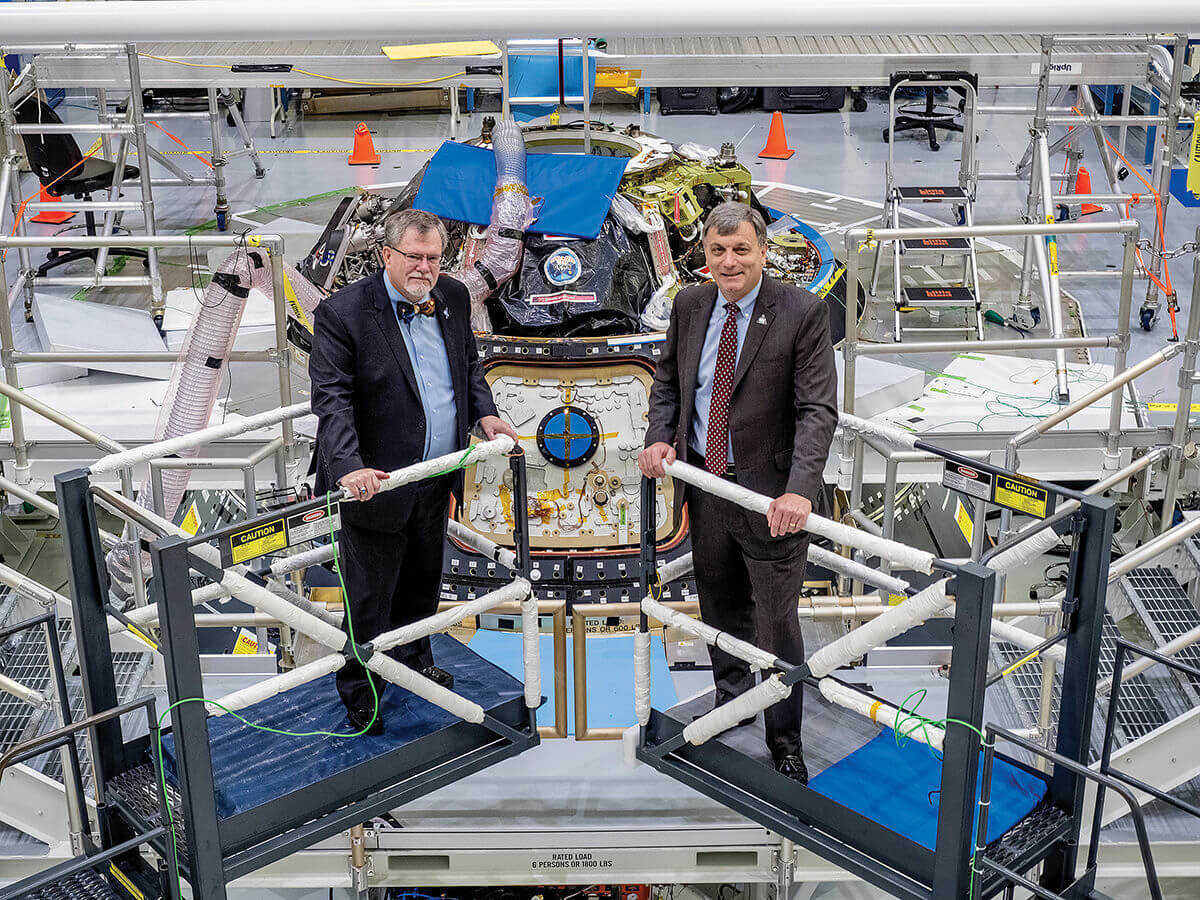 Hawes (left) and Kirasich (right) overlooking the Exploration Mission 1 Crew Module, expected to return us to the moon on an unmanned test flight in late 2020. Photo via NASA/Radislav Sinyak

Similar memories remind Hawes of the inspiration that launched him on a comparable trajectory. The next time humans land on the moon, and the first time people set foot on Mars, Kirasich and Hawes will be not just spectators but protagonists in the story of how it happened. They won’t make the journeys themselves, but their handiwork will have much to do with ferrying astronauts into deep space.

First, back to the moon. Hawes and Notre Dame planetary geologist Clive Neal speak often about the importance of surveying the moon’s resources to determine how they could supply missions to Mars. Despite an impression in the public mind that the moon has been explored, the Apollo astronauts traversed but a trivial fraction of its surface — about the equivalent of a Paris sightseeing tour, to borrow a favorite Neal analogy.

We have much more to learn. Experts speculate that unexplored geological formations on the moon could be of great significance. Indications of water carry the promise of a hydration source that could support Mars missions.

“Everything that we do on the moon should have a path to ultimately feed forward to Mars,” Hawes says, “so we’ve built some of our plans looking at Mars first, and then that kind of backed up.” The idea is to use the moon as a proving ground for spacecraft systems, operational techniques and astronaut training.

Part of that process involves the construction of a “gateway,” a spaceport in continuous orbit around the moon, allowing extensive exploration of the lunar surface. A larger module to transport astronauts to Mars will be stationed there, like the bigger planes waiting at O’Hare for the passengers who have made their regional jet connections.

The length of a Mars journey — some months just to get there and back — will inflict considerable physical and psychological strain, but aeronautical realities impose size and weight limitations that will make most creature comforts and some customary spacecraft features impractical. Having a Mars capsule in permanent orbit around the moon will allow it to be built, for example, without the heat shields necessary to reenter Earth’s atmosphere, leaving more room on board for other necessities.

After decades of astronauts staying closer to home, Orion test flights to the moon will begin in the coming years, including a crewed orbital mission scheduled for 2022. President Trump has challenged NASA to return astronauts to the moon’s surface by 2024. Some projections suggest it will be possible to put people on Mars within a decade after that.

“It’s certainly closer than it has ever been in our lives,” Hawes says, but planning for every human need on such missions carries its own complications.

Like breathing. In the confines of a space capsule, exhaled carbon dioxide eventually has to be removed. Apollo astronauts did this by blowing into canisters, Kirasich says. A chemical inside each canister bonded with the CO2, eliminating it from the air. Each canister had a limited shelf life, requiring enough to be loaded aboard the ship for the entirety of the flight. “That was good for an Apollo-duration mission of a week or two,” he adds.

Mars astronauts will not have the ability to carry so much gear — it would add too much weight to the payload. Instead, engineers had to create a reusable method of expelling the chemical product of human exhalation altogether. “It’s a regenerative system where you blow air across a catalytic bed, and then the catalyst absorbs the carbon dioxide, and then we shut off the airflow and we open up a path to the vacuum of deep space, and then we heat it,” Kirasich says. “We essentially boil off the carbon dioxide to space.”

That’s just one of myriad technical innovations necessary to make deep-space travel possible. The benefits of all that effort and expense may seem far-off and extravagant to some, but others find space exploration inherently cool, creating a tug of war between public interest and public indifference. Trying to allocate scarce funds in light of those shifting sentiments makes it mission-critical to establish far-reaching and permanent public-private partnerships — which explains Kirasich’s close collaboration with Hawes.

Kirasich points out that the 1960s impetus to go to the moon did not arise from a soaring ambition to test humanity’s capacity to do great things. It was geopolitical one-upmanship. The Cold War ignited the American space program, a patriotic appeal that no longer provides rhetorical rocket fuel.

The Orion mission, by necessity, is much more cooperative than competitive. NASA oversees the specifications and the budget, providing general oversight. More than 800 American businesses spanning all 50 states have had some role as suppliers for the project, Lockheed Martin the most prominent among them. The European Space Agency, in collaboration with its main contractor, Airbus, also plays a key role in the Orion mission.

A shared sense of purpose now forges international unity, says Kirasich. He served as NASA’s liaison in Moscow in the 1990s, soon after the end of the Cold War, when the space shuttle docked with the Russian space station, Mir. That link foreshadowed decades of international collaboration, space exploration reconceived as a common quest of humanity.

Why do we explore? To uncover clues to the mysteries that have vexed humans forever, Hawes says. “Where do we come from, where are we going, are we alone?”

In that sense, the objectives have nothing to do with the moon or Mars, per se — or with any one nation on Earth — but instead provide a means for better understanding our own planet, ourselves and the universe we all inhabit.

Day to day, accomplishing those exalted objectives means dealing with the minutiae of money and machinery. Hawes often meets with members of Congress, whom he finds receptive to Orion’s benefits — technological progress, support for STEM education and improved international relations, among others — whether or not a constituent’s business has a direct stake in the project.

When Kirasich talks about “really cool hardware” and “engines that make big booms” and 10,000-pound slabs of aluminum machined down to 200-pound panels capable of withstanding the stress of a space launch, he sounds a lot like a 9-year-old watching the moonshot. He’s also underscoring a point about the terrestrial byproducts of the space program — like Apollo’s influence on the development of technologies in medicine, energy and electronics that have transformed human life.

Their mission focuses on the moon and Mars. All the marshaling of resources toward deep space, though, is ultimately meant to benefit the people of Earth.