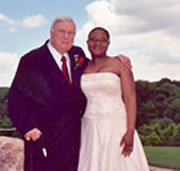 When Lena Jefferson ‘90 was married last year, the person who gave her away was not even related to her. But over a decade earlier, during her undergraduate years at Notre Dame, he had told her that when the time came he would be more than willing to fill the place of the father she’d never known.

So on that day, Emil Hofman, Notre Dame’s famously demanding professor emeritus of chemistry and the man she had come to call “Dad,” walked Jefferson down the aisle. (Their picture is to the left here) Their relationship, which began the summer before her freshman year, helped her through difficult times, both academically and personally. Without him, she says, she never would have graduated, much less become a psychiatrist.

Jefferson, who arrived at Notre Dame in 1986, admitted not even knowing where the place was when she applied. She says she was looking for a place very different from her hometown of Detroit, where she had attended Catholic schools. She also craved strong spiritual relationships and a sense of community. After her father disappeared she was raised by her mother alone until, when Lena was 13, her mother was diagnosed with bipolar disorder, a psychiatric condition marked by alternating episodes of mania and depression. Her grandmother stepped in and kept an eye on both Lena and her mother until the young woman left for college.

The summer preceding her first year, she attended a program designed to give minority students lacking strong academic backgrounds a head start on the difficult curriculum in math and science that all students on track for medical school must complete. For Lena Jefferson these classes would prove to be her greatest obstacle. After she completed the summer program, it was the opinion of the directors, including Hofman, that she wouldn’t make it through her first year.

Fall semester, Jefferson recalls, was “a little rough.” The minority population at the University was even smaller than it is today (now about 20 percent). This was a shock coming from her background and after spending the summer studying with minority students. And unlike most other African-American students, Jefferson was Catholic. That meant she shared no common spiritual ground with others of her race. Friendships developed instead out of their shared cultural and economic backgrounds, she says.

To make matters worse, she was soon in danger of failing several classes, including her introductory chemistry class with Hofman. The countless review sessions and individual tutoring he provided didn’t seem to make a difference. “I made it practically impossible for anyone to fail that class,” says Hofman.

“I was in that man’s office every week,” she acknowledges. Nevertheless, by the end of the semester she was in danger of being dismissed from the University.

Hofman, who was then also the dean of First Year of Studies, decided to give her another chance because of her work ethic and dedication. Together they decided she would switch majors from science pre-professional to psychology, keeping alive her goal of eventually becoming a psychiatrist. She still struggled with her courses but was able to remain in school.

Over time Jefferson became more comfortable as a student and eventually made friends. “I figured out that I could do it and what I needed to do to be successful,” she says. She and Hofman also became close, often meeting for “dates,” as the professor likes to call them.

“As long as he was there, I would go to see him. He truly became more than my adviser,” she says. Their conversations moved beyond chemistry to her difficult family history: her parents’ divorce when she was 4, the father she never knew, the mother who was missing from her life. During sophomore year, she started calling him “Dad,” a title he happily accepted.

In 1990 Jefferson received her bachelor’s degree in psychology. Psychologists treat people suffering from emotional or mental problems through therapy and counseling. But Jefferson still wanted to become a psychiatrist, a medical doctor who specializes in the diagnosis and treatment of mental or emotional disorders. So for the next four years she remained at Notre Dame, taking the science classes she would need to score well on the Medical College Admission Test (MCAT) and apply to medical school. During this time she also served as an assistant rector in Breen-Phillips Hall and worked for Campus Ministry, planning retreats and special projects for minority and international students.

When Jefferson finally finished her science requirements and took the MCATs, it was time to apply to medical school. Hofman wrote what he called “the strongest letter I’ve ever written for anyone wanting to go to med school.” He wrote, “If you take Lena you will be taking a chance, but she made it with us. If you treat her as an individual, she will make it with you too.”

Two medical schools, at the University of Cincinnati and Indiana University, accepted her. Jefferson enrolled at Cincinnati in 1995. Once again, she struggled with classes.

She met a fellow med school student, Patrick Haggard ‘94. He, like she, was looking for a faith community comparable to the one they had experienced at Notre Dame. They attended Mass together, she says, and he became like a brother to her.

Haggard witnessed the hard times Jefferson faced during medical school. “Numerous times she failed and had to repeat courses,” he says. “Every time she would pick herself up, reorganize and try again. I have never known someone with such determination and faith.”

It was while in med school that Jefferson learned that at least some of her academic difficulties were attributable to a medical condition. She was diagnosed with Attention Deficit Disorder. With proper treatment and extra remedial classes, she finally passed her board exams.

Jefferson had lost touch with Hofman while she was in med school. Yet she did not forget what he had told her years before: The most important decision she would ever make would not be her major or her career but who she would marry. “At the time I was only 19 or 20,” she recalls. "I didn’t take him very seriously."

When she became engaged to nurse James Wilson in March 2002, she says, she did not hesitate in asking Hofman to walk her down the aisle. Knowing he had helped her through so much before, she knew he would be there for her once more.

Now in her third year of psychiatric residency in Cincinnati, Jefferson says she is doing exactly what she hoped and is able to do so because of Hofman’s belief that everyone who works hard deserves another chance.