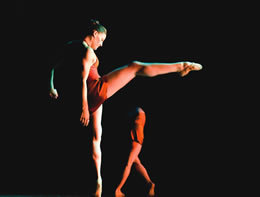 You could say a Brownie troop, a pink flamingo costume and a brush with a professional ballerina got Meredith Dincolo ’93 thinking about a career in dance.

It was 1978, and 6-year-old Dincolo was persuaded by the girls in her Brownie troop in Indianapolis to give up gymnastics and join their ballet class at the Jordan School of Music. Her first on-stage performance was in a production of Alice in Wonderland at Clowes Memorial Hall on the campus of Butler University.

“I was a pink flamingo,” says Dincolo, laughing. “I wore a tutu and big pink feathers in my hair.”

Performing alongside professional dancers from the Indianapolis Ballet Theatre, Dincolo got a close look at the life of a ballerina and basked in the warmth of the limelight for the first time. Her teacher singled her out to present the lead dancer with a bouquet of flowers at the end of the show.

“It was an exciting performance, and it got my interest going,” says Dincolo. “I still remember the music and the choreography.”

These days Dincolo lives in Chicago and performs professionally with Hubbard Street Dance Chicago (HSDC), one of the leading contemporary dance companies in the country. A nine-year veteran of Hubbard Street, Dincolo also has worked with Lyon Opera Ballet in France and Nationaltheater Mannheim in Germany. Her career has taken her around the world and provided opportunities she never dreamed of, she says. Though she briefly considered other career options — lawyer, art historian — during her years at Notre Dame, thoughts of becoming a dancer were never far from her mind.

“There was a time when I distanced myself from dance,” she says, referring to her early years in college when she focused on her studies and explored other hobbies. “But that’s when I realized that . . . when I got away from it, I missed it.”

A typical work day at HSDC in Chicago’s West Loop neighborhood starts at 10 a.m. sharp and ends at 6 p.m., five days a week. It includes more than an hour of ballet training in the morning, followed by rehearsal of new and existing choreography in the afternoon. In the weeks leading up to a show — the 19 full-time dancers in the main company at Hubbard perform approximately 70 shows a year, at home and abroad — they run through the routine endlessly, working out the details and perfecting the presentation.

“That’s when you dance all day,” she says. “Those are the hard days.”

Former Hubbard Street dancer Taryn Kaschock Russell, a member of the artistic staff at HSDC, says Dincolo is one of the strongest and most devoted dancers in the company.

“Meredith is extremely intelligent and unbelievably focused,” says Kaschock Russell, who teaches company class and conducts rehearsals. “She brings integrity to every single piece and puts herself wholeheartedly into it. She is a pleasure to dance with.”

Dincolo discovered modern dance by accident. Trained exclusively in classical ballet as a child, she studied under Romanian choreographer Iacob Lascu in Michigan when her family moved to West Bloomfield from Indianapolis in 1980. In high school she attended summer workshops at Boston Ballet, School of Chicago Ballet and the School of American Ballet in New York City. After graduating from Notre Dame a semester early with a degree in English literature and French, she moved to Chicago to pursue a career in classical ballet.

Dincolo performed regularly in productions around the city, such as The Nutcracker, Giselle and Hansel and Gretel. To supplement her modest income, she worked part time as a waitress. One day a friend’s parents took her to see a performance of Hubbard Street Dance Chicago. Wowed by the theatrics of the piece and intrigued by the way in which classical ballet techniques were incorporated into the contemporary routine, Dincolo decided to explore the medium more fully. She signed up for classes at the Lou Conte Dance Studio, part of HSDC.

“I studied jazz and modern dance to get exposure,” she says, adding that she wanted to round out her dance repertoire and expand beyond classical ballet.

Before long Dincolo was cast in roles in contemporary projects around the city. In 1996 she was hired by HSDC as a full-time dancer.

Contemporary dance is athletic and physical, and requires tremendous stamina and endurance. Unlike classical ballet with its fixed movements and distinct, gender-specific roles, modern dance allows more freedom and individuality. Dincolo says it “re-forms the vocabulary of classical dance” in favor of a more flexible lexicon.

“It puts aside [the notion] that every step has to have a name,” Dincolo says. “You can . . . just let the movement be what it is.”

That’s not to say that modern dance ignores the discipline and structure of more traditional dance forms.

“It’s not as if choreographers have any animosity toward terms; they may still tell you to do an arabesque,” Dincolo says, but adds that dancers are less bound by rules and can take more risks in modern dance.

There is also more freedom in how they look.

“There’s not a lot of ‘Why don’t you look like her?’” says Dincolo, who is 5-foot-8½ with an athletic, muscular frame. “There’s no pressure to fit one ideal; part of [the] focus is that we have different physiques, different personalities.”

Dincolo spent four years with HSDC, leaving the company in 2000 when an opportunity to dance with the Lyon Opera Ballet in France presented itself. After three years in Lyon she moved to Germany, where she danced for one year with Nationaltheater Mannheim. In 2004 she returned to HSDC.

“It was really the only place that interested me,” she says about HSDC, adding that she was excited to work under the direction of choreographer and dancer Jim Vincent, who replaced Lou Conte as artistic director when Conte retired in 2000. “I was not coming back to do the same stuff.” While she was a familiar with the material, she says, there were also new creative opportunities. These included the chance to perform original work and exclusive pieces — something that attracts many dancers to the Chicago repertory company.

“There’s a different experience in learning someone else’s creative steps versus doing something [exclusive], that’s happening just for you,” she says. In April the company premiered Off Screen by Alejandro Cerrudo, a fellow HSDC dancer, and, in June, danced Slipstream, a piece choreographed by Vincent, his fourth work for the dancers during his tenure at HSDC. The latter piece was performed in conjunction with the Chicago Symphony Orchestra.

Dincolo says she appreciates working with choreographers who have strong ideas and are able to guide those ideas along while allowing the dancers some creative input. A few of her favorite choreographers include Spaniard Nacho Duato and Czech Jirí Kylián, world-famous teachers whose works uniquely combine classical and modern techniques. She also enjoys performing pieces by artists from her “own neighborhood,” such as Cerrudo, Vincent and HSDC associate artistic director Lucas Crandall.

Hubbard Street Dance, which is 32 years old this year, is searching for a new artistic director to replace Vincent, who will join the Nederlands Dans Theater this autumn. Dincolo hopes the incoming leadership will maintain the big-picture focus of the company and continue to push creative boundaries. She also hopes the company will remain the nurturing, cohesive group it is today. Dincolo says the closeness among the dancers is obvious when they perform on stage together and contributes to their success as individuals and as a group.

“The high-level quality of dance and of the dancers is what makes us unique in the United States,” she says. The company’s international presence, as well as its performances in major U.S. cities, she says, “attract dancers who are looking for something that is not specifically modern or classical or jazz.

“It’s this combination of styles that you won’t find anywhere else.” 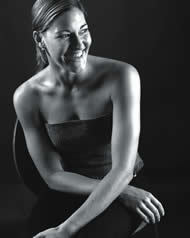 The 37-year-old Dincolo says she has no immediate plans to retire — some dancers perform into their 40s, she says — but notes that the older she becomes, the more difficult it is for her body to recover.

“[Dance] is so athletic, so hard on your knees and your back,” she says.

When she decides to hang up her dancing shoes for good, Dincolo says she may consider teaching or holding workshops on dance. But more than likely she will pursue another passion: cooking.

When she is not dancing, Dincolo enjoys entertaining friends in her Ravenswood apartment and cooking elaborate meals. She says she is happiest when listening to good music — classical and classic rock are her favorites — and preparing a meal for her friends to enjoy. Her specialty is rustic French food. Despite vigorous daily workouts in the studio for her job and occasional yoga classes in her down time, Dincolo says she can’t eat anything she wants, despite what people might think.

“I’m not ridiculously obsessive about what I do and don’t eat, but I’d rather have a little bit of something good than a lot of fake food, like cheese without fat,” says Dincolo, who confesses there is nothing better than a good steak, in her opinion.

With today’s economy in crisis and people struggling to make ends meet, purchasing a ticket for an arts performance might be the last thing on people’s minds. But Dincolo argues it should be foremost.

“Now is a precarious time; we need to have performances and entertainment in our hyper-reality-obsessed world,” she says. “We need to [turn] the lights down and present something that takes you away from reality.”

As one of the artistic associates at HSDC, Taryn Kaschock Russell says she and her colleagues strive to create performance pieces that inspire patrons and keep them coming back. They deal with the uncertainty of the economy on a daily basis and continually revisit the question of how to keep their organization vital to the public. It comes down to inspiration, she concludes.

“People come to be inspired, to be taken out of their lives,” Kaschock Russell says.

Recognizing this, the choreographers and other creative staff at HSDC take topical themes and create art from them. Whether presenting a comical dance routine or tackling the theme of hardship in a creative way, Kaschock Russell says the goal is to help people let go and “move forward” with a different outlook.

Dincolo says modern dance — its affordability, accessibility and wide appeal — is an art form she would love more people to explore. Not only are the performances entertaining for the audience; the dancers, too, get a thrill from putting on a good show.

“You get a different reception in each city,” she says. “But when you feel that you did good work and it was appreciated, this is the culmination of what you work for, the validation.

Ruth Keyso is director of communications at Lake Forest Academy in Lake Forest, Illinois, and the author of Women of Okinawa: Nine Voices from a Garrison Island.