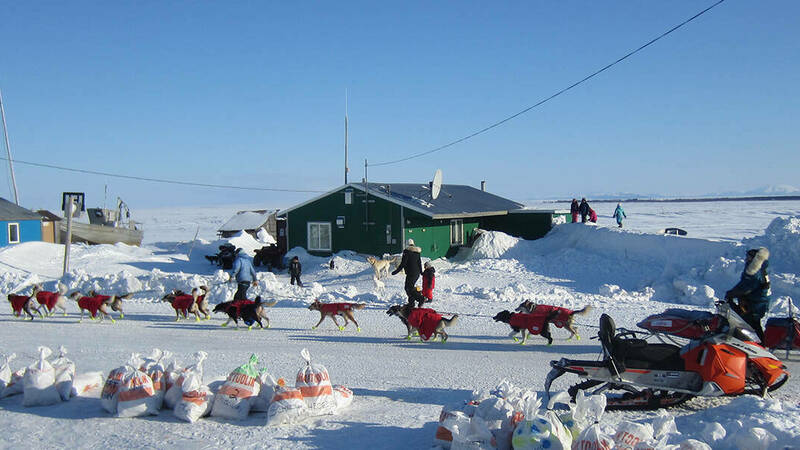 They told her they would sleep on the snow. Caroline Tonozzi ’99 loved the outdoors but had never camped before, let alone slept on snow. Now she was in Alaska with temperatures far below freezing, getting ready to bed down on the tundra outside Rohn. The others in her group — all experienced campers — saw the fear in her eyes and showed her how to spread pine boughs under her sleeping pad to insulate it from the ice. Still, the camping spot was so remote she slept with her headlamp on.

“It was really dark. Nothing but trees, mountains, moonlight and me,” Tonozzi says. “Just this kid from central Illinois. Here I am in Nowhere, Alaska, and I don’t know what the hell I’m doing.”

An emergency and critical care veterinarian, Tonozzi was working her first stint in 2016 as a volunteer vet at the Iditarod, the world’s premier dog-sled race, which covers 1,000 miles from Anchorage to Nome. She had visited Alaska twice before — once for a friend’s wedding, once for a cruise — fallen in love with the state’s enormous beauty, and, looking for a way to utilize her veterinary skills beyond the intensive care unit, applied to volunteer at the Iditarod. She had no experience with sled dogs and admits she didn’t have much idea about what would be involved. “Going on a cruise and staying in a tent on a frozen lake are much different experiences,” she says.

That first night, she couldn’t get over the thought she had to do this for four more nights. Until she did. “Once I started working, I got over it,” she says. “I can’t tell you how much I loved it.”

Tonozzi was assigned to one of the nearly two dozen checkpoints on the racecourse. There she examined the dogs for injuries or illness. The most common ailments are paws scraped by ice (even though the dogs wear protective booties), foreleg- and shoulder-muscle strains or lameness, and sores where harnesses have rubbed. The dogs, all huskies, can also experience diarrhea and vomiting from not eating enough — they need about 10,000 calories a day to pull the sleds more than 100 miles a day. Occasionally, they get aspiration pneumonia if they vomit while running. In warmer temperatures (above zero degrees Fahrenheit), the huskies can overheat. Females can also go into heat, which becomes a distraction to the male dogs. And volunteers may see the occasional arrhythmia or ACL tear or, especially toward the end of the race, gastric ulcers.

Over the five years she’s worked the Iditarod, Tonozzi has seen it all. She’s had to give IVs to dogs suffering from pneumonia and arrange for them to be flown out by bush pilots to an emergency hospital in Anchorage. The goal each year is zero dog deaths. In her first year, a drunken man on a snowmobile crashed into the checkpoint at Nulato, killing a dog and injuring another. The next year, four dogs died of various causes, though none were dogs Tonozzi had examined.

Her first experience of working with the dogs and the mushers, and being welcomed by veterinarians from around the country was so much fun that after two weeks she didn’t want to go back to Illinois. “I felt I was relearning how to be a vet at age 39, doing this incredible thing, and I couldn’t wait to do it again,” she says. She’s returned every year since.

She’s faced greater challenges than camping: cranky mushers who are tired and hungry, stretches of 24 hours without sleep, the bitter Alaska cold. It’s not unusual for blizzards to cause whiteout conditions or for strong winds to push temperatures as far down as 100 degrees below zero.

The benefits far outweigh the hardship. She enjoyed her first trip on a snowmobile — a thrill ride on a frozen river with spots of open water. Spied a herd of musk oxen from a single-engine plane while flying into Unalakleet. Marveled at Alaska’s outsized scenery. Took tours of remote coastland led by the proud mayors of small towns. Feasted on salmon and blueberry pie prepared by locals at the checkpoints. Attended a moose roast in Takotna (population 50), where the villagers fed volunteers and mushers in the town hall. “We sat elbow to elbow like at a church dinner,” Tonozzi says. “It was a huge party for the village.”

It’s the dogs, more than anything, though, that keep her coming back. She loves seeing them at the start, hopping around, pulling on the harnesses, ready to go. And watching them arrive, excited to reach the checkpoint, wagging their tails, knowing they’re going to get a rest. Even seeing them sleeping peacefully in the dog yard at night. “One of the greatest joys is to see the dogs so excited to do what they love to do — which is run,” she says. “And I get to do what I love to do — take care of dogs.”

Growing up in Spring Valley, a town of about 5,800 in central Illinois, one of five children in her family, Tonozzi asked for a dog every Christmas. Santa finally delivered when she was in eighth grade: a beagle she named Willie.

To that point, Tonozzi had thought about being a physician, but Willie steered her interests toward veterinary medicine. During high school she volunteered at the local veterinary hospital. After graduating from Notre Dame, where the third-generation Domer majored in biology, she went to veterinary school at the University of Illinois. She assumed she would become a farm vet, but horses scared her and she didn’t like pigs, so in her final year, she decided to specialize in critical care. She still lives near the university, where she is clinical assistant professor in small animal emergency and critical care at the teaching hospital, and has three rescue dogs of her own: Tess, Cordelia and Charlotte.

Late in the year of Tonozzi’s first Iditarod, the documentary film Sled Dogs alleged that many huskies are chained up most of the time they are not running, that they are neglected and physically abused, that poor performers are euthanized. Several companies dropped their sponsorships as a result, and People for the Ethical Treatment of Animals renewed its complaints, voiced since the Iditarod began in 1973.

Tonozzi acknowledges that some mushers treat their dogs better than others, just as some dog owners do, but says she has not witnessed the mistreatment of any sled dogs during her tenure. She also points out how some people do not understand the difference between a working dog and a pet dog, and she acknowledges she’s had a lot to learn, too. “My job is to educate myself to make sure those things don’t happen to them,” she says.

The year after Sled Dogs was released, the sport’s biggest star, Dallas Seavey, who had won the Iditarod four times, was thrust into a doping scandal when four of his huskies tested positive for banned substances. Seavey denied that he had doped his dogs and skipped the race in 2018 and ’19, even though the Iditarod leadership apologized in the winter of 2018 and said they believed Seavey wasn’t responsible for his dogs testing positive for an opioid pain reliever. Seavey returned to the Iditarod and won the coronavirus-shortened race in March 2021.

Tonozzi says she has been impressed with how Seavey cares for his dogs, from what she’s seen. Urine samples are collected from all of the dogs throughout the race and tested for performance-enhancing and masking substances. In the absence of positive results, Tonozzi believes the dogs are running clean. “I haven’t seen shenanigans or anything to raise my antenna about doping,” she says.

When not working, she’s usually running, averaging 40 to 50 miles a week. As an undergraduate, she never would have imagined that for herself. Back then, she considered the walk from McGlinn Hall to the library a long trek and thought running was stupid — having heard her brother, a cross-country runner, talk about vomiting after races. Still, after some time on a treadmill at a local gym, she ran a 5K.

He rolled his eyes. That was all the motivation she needed.

She completed her first marathon in 2014. Then two ultra marathons (one 50 kilometers, the other 50 miles) the same year. She fell in love with trail running and the ultra community. She has since entered seven 100-mile events and finished two of them. Running — like being a dog lover — has become part of who she is. “I hated running until I started doing it,” she says. “Now I can’t imagine not doing it.”

Just as she can’t imagine not returning to volunteer at the Iditarod. Her memory of a moment during one race sums up her reasons for wanting to return: “I looked around at the mountains, saw the sun setting, saw a river stretching for miles, and thought, ‘Holy cow, this is my life right now.’”

John Rosengren is a freelance writer and author of nine books. His novel, A Clean Heart, was published in May 2020 by Mango.