It’s not really fair to say that Ryan Doherty ’09 surprised the professional beach volleyball world with a breakout rookie season. At just over 7 feet tall, he was pretty noticeable from the moment he showed up on the beach. 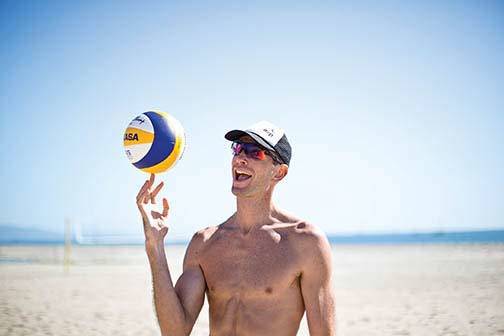 But after a victory over America’s reigning Olympic gold medalists last summer and two international competitions to start the 2013 season, the 29-year-old former All-American pitcher is making a career for himself as the big man on the beach.

And even though beach volleyball might seem like an obvious choice for a guy who has to duck under doorframes, Doherty’s introduction to the sport began as many great journeys do: couchsurfing.

In the summer of 2008, Doherty had retired from a career as a minor league pitcher for the Arizona Diamondbacks and was living in Hilton Head, South Carolina, on his friend Steve Johnson’s couch. Doherty’s baseball career started promisingly: After three years at Notre Dame, one of them as an All-American, he paused his collegiate career in 2005 and signed as the tallest pitcher in minor league history. But Doherty never made it out of single-A ball, bouncing across America between four different teams in three years.

By the summer of 2008, though, Doherty’s baseball career was over. “Being a pitcher and a baseball player was a huge part of my identity, so having that taken away threw me into a bit of a tailspin,” he later wrote. Unable to play or even watch baseball without a pang of remorse, he whiled away his off hours at the beach, tossing around a cheap volleyball with Johnson. They were terrible. It was a start.

“Anytime we were both free, we would go and try to pass the ball back and forth, and try to learn to play a little bit,” Doherty says from California, where he now lives when he’s not touring. “Usually we would get beat on weekends by high school girls and the local DJ. But it was a ton of fun.”

He finally got off the couch and finished the last year of his Notre Dame degree in 2009. He moved back to New Jersey after graduation, but it was too late for Doherty — the volleyball bug had bitten. So he packed up and drove his Jeep out west to the golden sands of Huntington Beach, California, the Mount Olympus of American beach volleyball, where the volleyball dudes play south of the pier every morning.

“When I first moved out to California, no one really knew who I was,” Doherty says. “One of the local Huntington Beach guys said, ‘Who brought the Avatar down here?’” referencing one of the 10-foot-tall blue aliens from James Cameron’s movie. “The nickname stuck.”

Beyond the sheer physical gravitas of lithe, tan, swimsuit-clad titans with legions of abs, beach volleyball is a mercilessly technical sport. Of course Doherty has a height advantage — the guy is a Burj Khalifa on a beach of Willis Towers — but even the Avatar got smacked around in his first games.

Fortunately for Doherty, he had some people looking out for him. He met Angie Harris Akers ’98, a fellow beach volleyball pro who also lives in Southern California, and the two became fast friends.

“Of course we Domers have to stick together, especially in the beach volleyball world, which is dominated by USC and UCLA and California kids,” says Akers, who was a monogram winner for the Irish in indoor volleyball.

Doherty still needed help with his technical game, though. That’s when Casey Patterson, a mohawked California native and one of America’s top beach volleyball players stepped in. In the winter of 2011, Patterson recognized Doherty as a diamond in the sand, and offered to partner with him for the 2012 summer U.S. touring series. Patterson also connected Doherty with a volleyball coach, and Doherty applied his well-honed athletic discipline to sharpen his skills in his newfound full-time job. It wasn’t quite boxing in a meat freezer — more like hundreds of serves every day — but it prepared Doherty for the domestic open tournaments he and Patterson competed in that summer.

Then a funny thing happened: They started winning. Their breakout came in May 2012, when Doherty and Patterson stunned the beach volleyball world with a victory over Todd “The Professor” Rogers and Phil Dalhausser, the defending Olympic gold medalists, at the National Volleyball League finals in Baltimore. Suddenly everyone wanted to know the Avatar’s name.

As thrilling as that was, Doherty says his season highlight came at the Jose Cuervo Pro Beach Series in Belmar, New Jersey, about 20 miles from his hometown of Toms River. There, Doherty played in front of his family for the first time.

“My friends and family were almost as fired up as I was,” Doherty says. “They went to every one of the matches, they were rooting me on. When the last point fell that won us the tournament, I remember looking up and everybody was there losing their minds and cheering for me, so it was a very, very cool experience.”

In March, Doherty created a thoroughly tongue-in-cheek blog to document his volleyball life, ryan-doherty.com. In addition to dispensing gold nuggets of wisdom (“God never closes a door without opening a window, which is why God’s heating bills are astronomical”), Doherty documents his origin story in his own words. His own words are often hilarious.

On YouTube, he posts his Avatar-Cam, a video series in which he details, in his characteristic unflinching deadpan, his typical practice facilities (exotic beaches, usually) and his workout secrets (a “set or two of crying,” a “couple sets of swearing” and “one solid set of high-intensity vomiting”).

Back on the beach, Doherty is now partnered, only a little ironically, with Rogers, the gold medalist he defeated to launch his career. “Beach volleyball is very fun that way,” he comments. “There’s always partner swaps, and breakups, and the jilted ex that gets left behind, and all that fun, gossipy stuff.”

Together they traveled to China for two international tournaments, his first major invitational. Doherty even managed to get a seat on the plane with extra legroom for the 12-hour flight.

“Last year I didn’t play any tournaments that were outside of the country,” he says. “This year we’ll have a bunch of tournaments where we’ll represent the U.S. or be one of the U.S. teams competing on an international level. So that’s really exciting and means moving in a direction toward hopefully representing the U.S. in the 2016 Olympics in Rio de Janiero.”

Just the Olympics. No big deal. And for Doherty, who plans to play at least another decade, it’s wholly possible.

“If anybody’s going to succeed in this sport, it’s going to be him,” says Akers. “He has the right attitude, the right work ethic. He’s smart. I’m so impressed by this guy, and I am so proud that he’s a Domer. So I’m pulling for him for sure.”

In the meantime, he has some blog posts to write.