One of the stories she told her children was about hobos.

The way Ruthanne “Dolly” Donahue related it, her family’s house was close enough to the railroad tracks that hungry men would appear regularly at the doorstep. Dolly’s mom never let these men come into the house, but she would scramble some eggs and feed them on the porch. 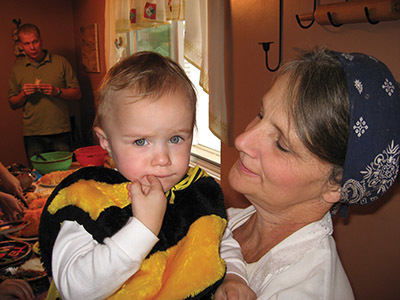 One day, when her mom wasn’t home, Dolly saw one of the raggedy men approach. She didn’t have any eggs, so Dolly brought out all the five dollars she had saved from babysitting, and that’s what she gave him.

She had learned that you don’t close your door on the needy. You don’t send them away empty-handed.

These days, poor folks don’t knock on our doors. Instead, we make our monthly donation to the United Way, dump our pocket change in the Salvation Army kettle at Christmas or buy socks for the homeless shelter. After all, we are generous people.

In northern Indiana and most other places, there is no shortage of charities and social-service agencies that serve the down-and-out. Treatment is available for the addicted, shelter for the homeless, food for the hungry.

However, most facilities have limits. They have criteria on income, age or gender. They may require sobriety. They ask you to fill out forms, find your solutions and eventually move on. When it comes to checking those boxes, some people just don’t fit.

And what do you do with the severely handicapped baby whose overwhelmed parents just want to cut and run?

For the past 40-some years, Dolly’s House provided the answer. She flung open her doors to hundreds of people of all ages with all kinds of needs — from those abandoned babies to abused mothers to alcoholics and addicts and Alzheimer’s patients. She welcomed all of these as children of God, accepting them as they are and helping them live better lives.

“It is total self-donation to a heroic degree,” says longtime friend Patricia Bayliss. “She’s been the firewall for the caregivers that are established in the community. She’s always been there for the police, the hospitals, the homeless shelters, all the people in need.”

Bayliss, wife of retired Notre Dame tennis coach Bob Bayliss, is among a steady stream of campus volunteers who have helped at Dolly’s House. She was brought into the fold by her spiritual adviser, Father Edward O’Connor, CSC, ’44 who taught theology at Notre Dame for 41 years.

Father O’Connor was celebrating Mass at Dolly’s every Saturday. Pat Bayliss’ plan, when she first met Dolly two decades ago, was simply to help the priest set up for Mass.

It changed for Bayliss when she saw Dolly providing such a joyful place where others might expect human misery. “There is a spiritual dimension to her,” she says. “You recognize that this is Christ’s work. And, over time, you fall in love with the people.”

Dolly resolutely shunned publicity. In February, when she finally assented to her first-ever media interview, she admitted there never was a master plan for Dolly’s House. The first child to live there, in the 1970s, was a neighbor boy whose family struggled to put food on the table. “He would just come over here begging for food,” Dolly said. “One day, his father dropped him off and never came back.”

That neighbor boy was raised by Dolly with her own three children. Eventually, as a single mom, she became licensed as a foster-care provider. She also adopted six special-needs children. Dozens of other children and at-risk adults have spent a day, a month or more than a year with Dolly. And although area social-service agencies were well aware of her, the general community was not.

Dolly’s House has operated without a billboard, a Facebook presence or a Yellow Pages listing. It has no corporate sponsor, no telethon, no grant writers, no civic leaders acting as a board of directors. The structure has been informal, harkening to the days when folks looked after their own, when churches and kind neighbors provided for the community’s less fortunate.

Since that first hungry child moved in, Dolly’s reputation for welcoming those in need spread by word of mouth. Downtrodden visitors would arrive, and Dolly would give them a place to sleep and food to eat. When she began to run out of room, she added on to her house, which now has 15 bedrooms. If she saw herself running short of food, she enlarged her garden.

Some area churches noticed and began taking up special collections. Somehow, there always was money. “We never know where it’s coming from,” Dolly said. “I never asked.”

Similarly, volunteers from Notre Dame have shown up often over the past 30 years. For Tom Kelliher ’88M.A., ’97Ph.D., the beacon came in the form of an essay written by Jim Donahue, one of Dolly’s sons, for a Massachusetts Institute of Technology publication. The article used Dolly’s work with children born with disabilities as an argument for protecting the lives of the unborn.

Kelliher was working on his doctorate in history at Notre Dame at the time. A friend sent him a copy of Jim Donahue’s essay, and Kelliher knew he had to meet this unselfish woman.

At the house on Ireland Road in Osceola, at the far eastern border of St. Joseph County, 15 miles from campus, Kelliher found others from Notre Dame already pitching in, including Father O’Connor and Pat Bayliss. Kelliher was inspired to bring fellow students, including Bill Keen ’93, ’99MBA, to visit this place where faith and service are not just terms in a textbook.

For Keen, who says he was then just a naive freshman from the Chicago suburbs, it was a life-changing event. First visits can be overwhelming. It would be hard to find such an array of potential human misery under the roof of any private residence. On any given day, there might be abandoned children, abused mothers, drug addicts and homeless families.

Fear or disquiet might make you want to turn away. But Dolly’s example coaxed Keen to draw nearer. It was like being pulled close to something pure and holy.

“The way I was raised, these things were very uncomfortable for me. I saw how tough life can be for other people,” he says. “She’s had such a strong impact on my life. For her, Catholicism wasn’t just theological. It’s the way her faith lives out in the real world. She looks at every person and welcomes them in with open arms.”

In many ways, he points out, such grace helps redefine our relationship with those who are less fortunate. It’s not our duty to help, Keen says. It’s part of our joy.

“Sometimes she would have 50 to 60 people living with her,” he says. “She has it down to a science. She has rules. She is strict, but she’s loving.”

Keen kept his connections with Dolly’s House through his undergraduate years and renewed them in 1997 when he returned to campus to earn an MBA. He served on the graduate school’s community service committee and helped introduce dozens more classmates to Dolly’s mission.

“I loved it when the weekends would come,” he says. “We would arrange to take some of Dolly’s kids to a Notre Dame hockey game or football games. We would help with tutoring or just go out there and play.”

When Kelliher began teaching at Northridge Prep School in Niles, Illinois, he would drive back to Osceola several times a year, often bringing student volunteers who would pitch in on chores or activities.

Dolly did not preach to volunteers, preferring to let them discover lessons on their own. “You don’t have to say a lot. You just have to see it in action,” she said in February. “The volunteers have been very good to our children. A lot of them are intrigued because they come from upscale neighborhoods. This is new for them.”

Dolly’s House had been taking in people for about 40 years before it finally made the local news. In 2013, an Alzheimer’s patient living at Dolly’s wandered away, setting off a search of area farm fields. When the story broke, some neighbors were shocked to learn that she regularly had such large numbers of people — usually 20 or more — living under her roof.

County officials investigated, and it didn’t turn out how you might think. Inspectors found no flaws on the property, and there was such an outpouring of support from local agencies, volunteers and neighbors that the county commissioners ended up praising Dolly’s work. Her home might be unconventional, but it was deemed to be safe and essential to the community.

At the base of it all was her Catholic upbringing. “I went to parochial schools, and we were always taught to tend to those in need,” she said.

Another story from Dolly’s childhood bears mentioning. When she was a student at St. Joseph Elementary School in Mishawaka, she was asked to save pennies for overseas missions. As an incentive, these little donors were sent the names of children from foreign lands who were receiving help.

She misunderstood part of the program. She was disappointed when she found out that those children would not be coming to live with her. “I actually thought you could keep them,” she said, smiling.

As Dolly spoke of her life’s work on a recent winter morning, there was a quiet weariness in her voice. She was on her deathbed.

Just two months earlier, she had been relentless. Nothing had stopped her before, but now she was bedridden. Her diagnosis, terminal brain cancer, had taken Dolly’s friends by surprise.

Her death, on April 20 at age 72, cut to the core of life’s toughest question: When you are doing the Lord’s work, what happens when the Lord calls you home?

“A lot of us who are close to her are trying to wrap our heads around this,” Pat Bayliss says. “I think it’s the Lord’s way of showing us that we are called to do what Dolly’s done.”

That huge house on Ireland Road is no longer providing lodging to those in crisis. For now, Dolly’s House is home only to her adopted children. It is hard to imagine that house without Dolly’s presence and leadership.

But Dolly said she expected her mission will continue. “It’s not as complicated as people think it is,” she whispered. “It’s just doing what’s in front of you.”

Still, it’s hard to shake those stories — of the little girl who emptied her pockets for a destitute stranger and who wanted to provide a real home for children suffering elsewhere in the world. Not everyone knows how to do that.