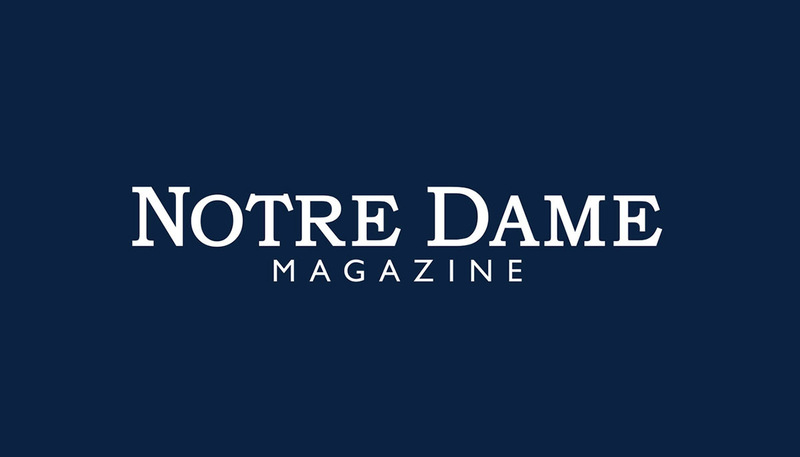 Mallory McMorrow ’08 was mad. The Michigan state senator had been singled out after a social media exchange with a colleague. “Progressive social media trolls like Mallory McMorrow (D-Snowflake),” state Senator Lana Theis’ fundraising email to supporters read, believe parents should defer to educators who “groom and sexualize” kids and who teach them “that 8-year-olds are responsible for slavery.” McMorrow expressed her outrage in a statehouse speech that went viral. “You can’t claim that you’re targeting marginalized kids in the name of ‘parental rights’ if another parent is standing up and saying no,” she said. The notion that learning about racial oppression should make white kids feel bad, she added, is “absolute nonsense.” Invoking Father Ted Hesburgh’s support for civil rights and her own Catholic upbringing, McMorrow concluded, “We will not let hate win.” Her words reverberated, leading to national media appearances and a call from President Biden — which went to voicemail while McMorrow was reading to her 1-year-old daughter at bedtime. “So that will be a story that I certainly hold over my daughter’s head forever,” McMorrow told New York magazine. . . . Jim Muller ’65, a Boston-area cardiologist and Nobel Peace Prize laureate, has built bonds for decades with Russian doctors to promote peace between the United States and Russia, its former Cold War foe. A co-founder of International Physicians for the Prevention of Nuclear War, Muller has been a prominent proponent of diplomacy to reduce the catastrophic risk atomic weapons pose to humanity. In February, Muller proposed an initiative to fight heart disease, cancer and COVID-19 that received widespread support from Russian colleagues. Then Russia invaded Ukraine, stifling that collaboration and raising the nuclear threat anew. Less than a month later, Muller addressed the Russian Academy of Science. “The path to survival is clear,” he said in the fluent Russian he learned as a Notre Dame student. “We must eliminate these weapons before they eliminate us.” Humans can be consumed by differences and resort to violence, Muller concluded, “but we can also think clearly, cooperate, negotiate and love. Let us choose these features of our nature.” . . . Just after starting as a columnist at The Sacramento Bee, Melinda Henneberger ’80 received a Pulitzer Prize in commentary for her work at The Kansas City Star. A finalist in 2019, she took the top honor this year, the Pulitzer citation said, “for persuasive columns demanding justice for alleged victims of a retired police detective accused of being a sexual predator.” When the prizes were announced in May, Henneberger said, “I’m so overwhelmed I really don’t know what to say except that this is extremely humbling and, as I may have mentioned a few hundred times before, that it’s past time for the FBI to show up with some handcuffs.” . . . Chicago Tribune reporter Madeline Buckley ’11 gives voice to the voiceless. That’s a criterion for the Anne Keegan Award, which Buckley received in May from the Chicago Headline Club. Named for a late Tribune columnist, the award honors journalists who “tell stories of ordinary people in extraordinarily well-reported and well-written prose, muting their own voice to give one to the voiceless instead.” Buckley’s work includes stories about a college student fatally shot on the city’s Green Line, a Holocaust survivor isolated from her family while suffering from COVID-19 and a food pantry volunteer who spent nine months hospitalized with the virus. . . . In April, Karsonya “Kaye” Wise Whitehead ’93M.A., who hosts Today with Dr. Kaye on WEAA radio in Baltimore, became the first broadcaster to receive the Vernon Jarrett Medal for Journalistic Excellence. A Loyola University Maryland professor of communication and African and African American studies, Whitehead won the $10,000 prize, presented by the Morgan State University School of Global Journalism and Communication, for a body of work that includes discussions about critical race theory and the trial of Derek Chauvin, the Minneapolis police officer convicted of murdering George Floyd. . . . FemCatholic, an online publication focused on issues facing women of faith, investigated parental leave policies for employees in the nation’s 176 Catholic dioceses. A March article by Isabella Volmert ’22, Renée Roden ’14, ’18MTS and Kelly Sankowski reported that 44 dioceses “do not offer any paid leave.” Sixty-nine dioceses did not respond or declined to provide information. The federal government does not mandate paid parental leave, and the 63 dioceses that provide full or partial paid leave offer a variety of reasons, from following state laws to supporting families in keeping with Church teaching. “I don’t blame the Church for not having these policies,” FemCatholic founder and CEO Samantha Povlock ’13 told the National Catholic Register. “I truly believe it’s a lack of awareness and adapting to the ever-evolving culture.” . . . Laura Schumacher ’85 established the Diversity in Law program at the biopharmaceutical firm AbbVie, where she’s chief legal officer and vice chairman of external affairs. The effort to promote equal opportunity extends into advocacy in the Chicago area, where AbbVie is based, and throughout the legal industry. The American Bar Association Commission on Women in the Profession has commended her work, naming Schumacher one of five recipients of the 2022 Margaret Brent Award, named for the 17th-century Catholic pioneer who practiced law in the American colonies and advocated for women’s suffrage. . . . The Kentucky Derby completed a triple crown for Lindsay Schanzer ’11. The NBC Sports producer has overseen the network’s coverage of horse racing’s other two jewels, the Preakness and the Belmont Stakes, and on May 7 became the first woman to lead a broadcast of the legendary Derby. “What’s really important to me is on this day we’re reaching an audience, many of whom never watched horse racing,” Schanzer told The Associated Press, “so it’s inviting them and also not alienating the audience that watches horse racing throughout the year.”