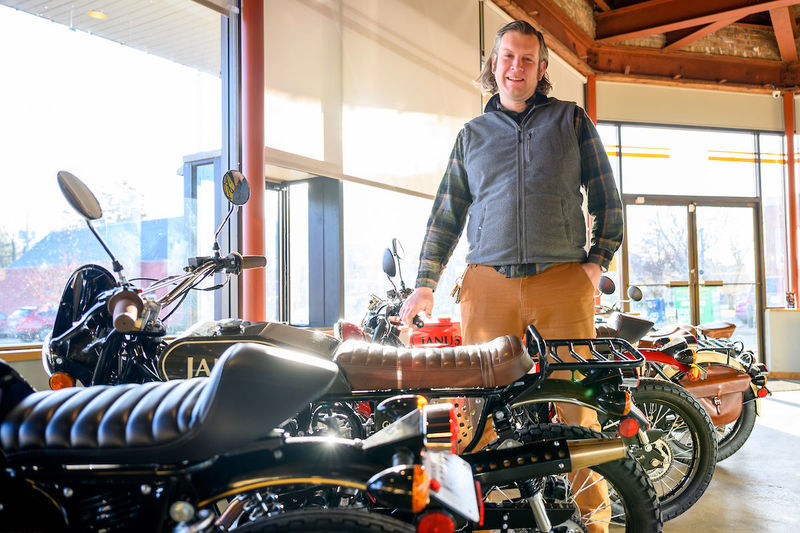 Worsham with some of his handiwork in the Janus Motorcycles shop in Goshen, Indiana. Photo by Matt Cashore ’94

In a former dry-cleaning shop in Goshen, Indiana, workers are assembling by hand lightweight motorcycles with the retro look of a century ago. Janus Motorcycles are small, sleek and lightweight, a nod to early motorized bikes.

Designing motorcycles was a career pivot for Richard Worsham ’11M.Arch., who arrived at the Notre Dame in 2007 planning on a future designing buildings. Then the Great Recession happened and took Worsham’s life in a different direction. In retrospect, he wouldn’t have it any other way.

“I feel like all the steps brought me here,” he says.

Worsham, 35, has taken his design skills and applied them in the very different arena of motorcycles. In 2011, he and Devin Biek, 37, previously a moped repair shop owner, founded Janus Motorcycles. They named the company after the two-faced Roman god who looks both to the future and the past.

In the back room of the Janus motorcycle shop, a crew builds the bikes in a meticulous, old-fashioned way. Many of the parts are supplied by Amish craftsmen working in small machine shops within 20 miles of downtown Goshen. They produce parts that are used in the local recreational vehicle and van conversion industry, as well as the frames, fuel tanks and other elements the Janus workers need to build their motorcycles.

The Amish don’t own or drive motor vehicles, instead relying on horses and buggies like their forefathers. They don’t have electricity in their homes, but are permitted to use some forms of power in their workplaces. Even though the religious faith of the Amish doesn’t permit them to own or ride motorcycles, their craftsmanship is ideally suited to producing the parts for Janus motorcycles, Worsham says.

Unlike most modern American motorcycles, Janus models include very little plastic. They’re mainly aluminum and steel. They’re small and lightweight. The company’s original model, the Halcyon, weighs about 265 pounds — compared to 600 or more pounds for a typical modern Harley-Davidson.

The rigid-frame Halcyon is the company’s best seller. The later models are the Phoenix and the Gryffin.

The three models are designed to appeal to a variety of riders: the Halcyon for street riding, the Gryffin for on and off-road travel, and the Phoenix for winding country roads. “We are trying to answer all needs,” Worsham says.

The bikes harken back to the early days of motorcycles and some classic brands, such as the Indian in the United States, the Brough Superior in Great Britain and the Moto Guzzi (still in business) in Italy.

A sport called board track racing was popular in the United States during the 1910s and 1920s. Early motorcycles raced on circular and oval race courses made of wooden planks. The sport was dangerous: the bikes were designed to move fast and early models had no brakes, resulting in frequent and deadly crashes.

The Halcyon is similar in appearance to those early racers, but it includes a modern engine, brakes, lighting and other safety features.

Janus bikes have been sold to individuals in 47 states. (They’re still awaiting customers from North Dakota, West Virginia and Mississippi.) The business has grown to 13 employees.

On a recent January day in the shop, eight motorcycles were lined up in a rear room, finished and ready to be picked up by their future owners. The startup recently reached the stage where they can stock a small inventory. Until that point, each motorcycle was built to order for its specific buyer, Worsham says.

Once an order is placed, it typically can be filled in four to six weeks.

The crew works from the three production models, but each bike is highly customizable, from paint to pinstriping to accessories. Depending on customized options, a Janus cycle sells for $6,995 to $9,500.

“Rarely do we make two bikes that are identical,” Worsham says. “We really pride ourselves on our personal touch.”

Among his professors was Carroll William Westfall, who joined Notre Dame’s School of Architecture in 1998 as the Frank Montana Professor and chair of the school, remaining chair until 2002. He is now a professor emeritus. Seeking to study under Westfall, Richard Worsham enrolled at Notre Dame in 2007.

Worsham hasn’t always been a motorcycle guy. “I was not interested in motorcycles when I was a kid,” he says. During his Notre Dame student years, Worsham didn’t have a car. For transportation, he relied on a vintage 1970s pedal-type Garelli moped and the city bus system.

He started taking his vehicle to a vintage moped maintenance shop in nearby Elkhart, Indiana, and struck up a friendship with Biek, the shop owner. Worsham worked at the shop in the summers during graduate school.

Worsham also attended weekly moped rider gatherings at the Elkhart shop. That’s where he met his wife, Amy, who grew up in Goshen. They married in 2009 and have three daughters.

The Great Recession, which started the year Worsham enrolled in graduate school and continued into the early part of the next decade, made architecture internships and jobs hard to come by when he finished his degree. “It was a small class of grad students,” he says. “Maybe two of us got (architecture) jobs.”

Meanwhile, Biek had grown his vintage moped repair business. The two friends started daydreaming, then talking more seriously about combining their talents — design and business — and creating a startup motorcycle business. The two established Janus Motorcycles in 2011, the same year Worsham moved from South Bend to Goshen (population about 33,500).

By that time, Worsham was “very hooked on two wheels.” He was inspired by small motorcycles he’d seen and ridden during architectural study trips to Italy. “I had caught the bug by that point,” he says. Italian cycles are “smaller, elegant and the design is really beautiful.”

Worsham and Biek built their first model over a period of two years in their spare time. Worsham designed the frame, Biek the fuel tank and they collaborated on the rest.

Worsham “did a lot of the form and I did most of the function,” Biek says of their design partnership. “Richard is very much an artist as well as an architect.”

The two men work together seamlessly, with no firm dividing line in their contributions toward their cycle designs. At the start, they shared a love of vintage mopeds and a similar goal: creating something new. “We were tired of working on someone else’s designs,” Biek says.

The fledgling partners met a representative from Elevate Ventures, a nonprofit venture capital organization, who found them seed capital for the startup in the form of a $25,000 loan. That was enough to get the business started.

By May 2012, the partners had their first model complete and were ready to start producing and selling motorcycles. It was mostly a custom operation in the early days, with Worsham doing the designing and Biek doing the building.

Over three years, the pair sold about 43 motorcycles with low-powered 50cc engines, capable of reaching maximum speeds of about 55 mph. Word spread among motorcycle enthusiasts via the company website, YouTube and social media. The company has gotten some national press, including a May 2019 business feature in the New York Times.

Janus motorcycles now rely on a Chinese-made 229cc pushrod single engine, because an engine of similar size and reliability isn’t available in the U.S., Worsham says. The engine has been in production for many years, is reliable, meets U.S. emission standards and doesn’t require specialty tools for maintenance work.

In 2015, Janus launched a Kickstarter crowdfunding campaign to fund the launch of models with the bigger engine. The larger engine can reach a maximum speed of about 70 mph. The campaign raised $30,000. “That campaign introduced us to some wonderful local investors who helped us get to the next level,” Worsham says.

Many buyers so far are individuals who already own one or more traditional contemporary motorcycles, but are looking for something smaller and different. The Halcyon remains the biggest seller.

Worsham is committed to the motorcycle business, but hasn’t turned his back on architecture. As a side project, he’s currently designing the future home for St. Mary’s Orthodox Church in Goshen. He recently was appointed as a member of the Goshen city planning commission.

Notre Dame’s School of Architecture focuses on classical architecture, so students often are studying historical buildings and history. “I take the same approach with my motorcycles,” Worsham says, seeking to produce not throwback models, but rather classic motorcycles.