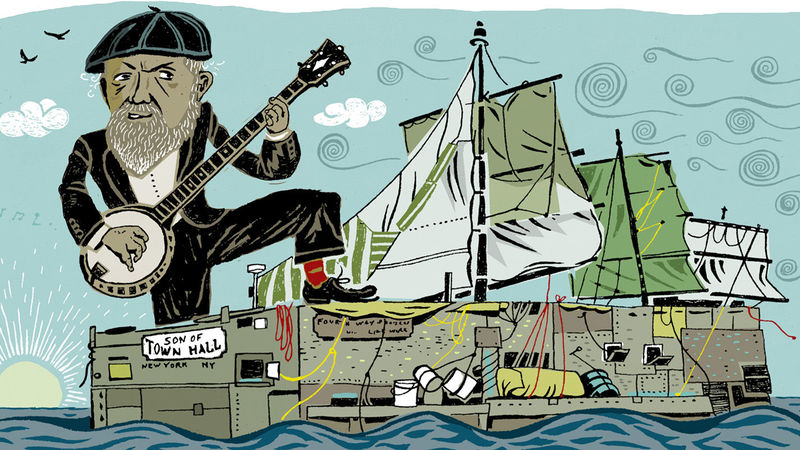 It happens every so often. You are perusing the obituary section of a newspaper or magazine — the “Irish sports pages,” as we call them in Boston — and you read a person’s life story from beginning to end. Instead of feeling sad, you feel uplifted. Gosh, you say to yourself, Poppa Neutrino had a fun life!

Poppa Neutrino did have a fun life. Like most fun lives, this one didn’t fit into any predetermined category. I suppose you could call Neutrino, born William David Pearlman, a drifter. In 1998, he floated across the Atlantic on a raft assembled from junk. He floated to Cuba in 2004 and ran for president as the standard-bearer of the Owl Party in 2008. The Owls, he explained, were halfway between the hawks and the doves.

Neutrino/Pearlman hated paying rent and at one point lived in a floating pile of junk named Town Hall, moored in Lower Manhattan. The subject of a biography, The Happiest Man in the World, N/P “led a life nearly as free as the subatomic particle for which he named himself,” according to The Wall Street Journal obituarist Stephen Miller.

At the time of his death in 2011, “Mr. Neutrino was laying plans for another float to Cuba,” Miller reported. “He had a novel in progress, and $4.44 in his bank account.”

Hail and farewell, blithe Neutrino! You made the most of our short journey here on the watery orb, and I’m sure some of your four wives would agree.

We have to ask: What is the purpose of our lives? Our genes are supposedly instructing us to perpetuate our humble little species. Our greed and self-interest drive us to amass treasure on earth, often at the expense of others. (By the way, I hope you will come see our bathroom renovation — it’s gorgeous!) But how many of the estimated one hundred plus billion of earth’s denizens had the luxury of living a fun life? Precious few, I bet.

Sometimes a life that looks fun from the outside wasn’t so fun in the living. The New York Times recently buried Florence King, an erudite and amusing “misanthrope who was a constitutional crosspatch.” King wrote for the National Review. Her job there mainly consisted of erecting sand castles to stem the tide of political correctness. “Feminists,” she observed, “will not be satisfied until every abortion is performed by a gay black doctor under an endangered tree on a reservation for handicapped Indians.” She likewise inveighed against children — couldn’t stand ’em! — the cult of Southern womanhood and against people who smoked in public. “No matter which sex I went to bed with,” King wrote, “I never smoked on the street.”

I’ve spent plenty of time with “colorful” characters — did I mention that Ms. King was also a gun collector and “erstwhile pornographer”? — and the telling can be better than the actuality. But the King obituary was a delight to read and fun to write, as its author, Margalit Fox, confirmed to me in an email.

Comedians famously battle with depression, and sometimes, confounding the vast audiences they have entertained, they take their own lives. And some comedians . . . well, if you haven’t seen the video of Graham Chapman’s 1989 memorial service, really — you must.

Chapman, who died at age 48, was a founding member of the Monty Python comedy troupe. His Python colleagues avoided Chapman’s funeral to honor his family’s privacy but turned the memorial service into a macabre laff riot that elevated comedy over the too-obvious tragedy, and the love of life over the despair of death.

In a brief eulogy, John Cleese recalled that Chapman admired him for being the first person to say [unprintable word] on British television. Then Cleese uttered an even more unprintable word in front of the TV cameras. Fellow Pythonist Eric Idle ended the service by leading the congregation in rousing choruses of “Always Look on the Bright Side of Life,” a morbid send-up of Disney treacle inserted into the troupe’s blaspheming movie, Monty Python’s Life of Brian. Sample lyric: “Always look on the bright side of death/Just before you draw your terminal breath.”

The British don’t mind cocking a snook at death, and no one seems to have more fun than the obituary writers at the conservative-leaning Daily Telegraph. They began their obituary of Tiny Tim, the ukelele-strumming oddity, thusly:

“Tiny Tim, the American pop singer who has died aged 62, specialized in horrendous falsetto vocalizations of sentimental songs, and cultivated an appearance of utter ghastliness to match.”

I wondered how the Telegraph celebrated the life of publisher Felix Dennis, who, judging by an obituary in The Economist, had a fun-sounding life. Let’s just say his Daily Telegraph life sounded even more amusing:

“Felix Dennis, who has died aged 67, was Britain’s most colourful media mogul; a former jail bird, crack fiend, serial womaniser and sometime poet and arboriculturalist, he built a publishing empire worth hundreds of millions of pounds.”

Dennis specialized in starting magazines that others predicted would fail, such as Kung-Fu Monthly, Maxim and The Week. They all succeeded, and Dennis invested the proceeds eccentrically. He planted a 30,000-acre hardwood forest on his Warwickshire estate and festooned it with life-sized statues of Bob Dylan, Stephen Hawking and Charles Darwin astride a Galapagos tortoise in a “Garden of Heroes.” When he published his first book of poetry in 2002, Dennis served free wine at all of his readings. The book sold 10,000 copies, a success that Wordsworth or Coleridge could only have dreamed of.

One of Dennis’ last poems ended:

They tell me I’m riddled with cancer
So I’m planning to croak with elan
If you’ll pass the cigars and decanter
I’ll be dying as hard as I can.

Life is hard and then you die. But that’s up to you, isn’t it? Many years ago, my mother drove me to a train station on my way to a job that would change my life forever. She saw me ruminating in the front seat, stony-faced and preoccupied. When I hopped out of the car, she said: “Don’t forget to have fun!”

Excellent advice for all of us.

Alex Beam is a contributor to the Boston Globe opinion pages, a columnist for Architecture Boston magazine and a guest commentator for the WGBH radio show Boston Public Radio. He has published two novels, three works of nonfiction and is working on a book about Vladimir Nabokov and Edmund Wilson.