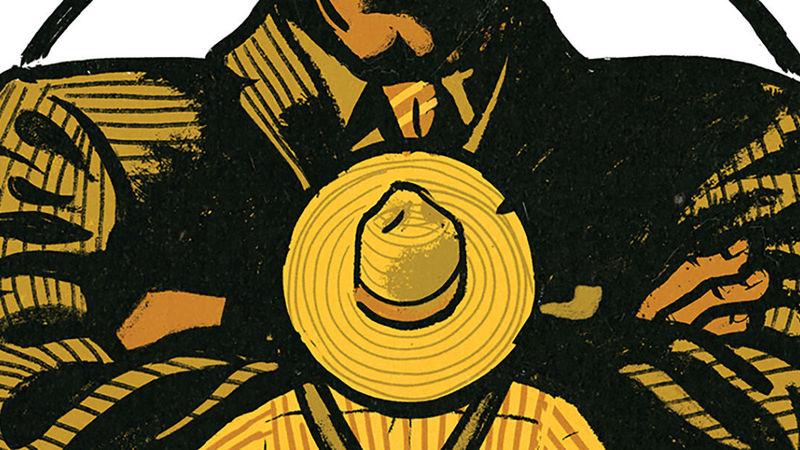 Many of us don’t like it when the man in the suit — the hired consultant from a big city far away — shows up with his spreadsheets and statistics, his PowerPoint, pie charts and bar graphs, and tells us what to do. We know our business better than he does. We know how it works in real life. We don’t need an outsider telling us what’s best for us, some expert handing out advice on, say, curriculum reform and standardized testing. Ten steps toward self-actualization. Or better crop yield. Explaining what the numbers say, what the algorithms show.

We’ve been on the frontlines, in the fields and trenches. We know what works and what doesn’t. We’ve lived it, seen it all firsthand. Experience is our expertise. Not the slipknots of knowledge gleaned from books, webinars and how-to guides. But real wisdom earned from living life.

Americans like street smarts. We like folks with grit and gumption, calloused hands and honest determination. Salt of the earth. We have that can-do spirit. We like to make it, fix it, do it ourselves. We roll up our sleeves and get it done, pull together as a team, work crew or community. Just us. Us against them — those outside forces (like government, environmentalists, intellectuals, city slickers, the bank, the Man), especially when that rebel stand requires a defiant, resourceful, rugged individualism.

This streak of insolence in the American character has deep roots. The nation was conceived in obstinate insubordination. Colonists against the crown. The immigrants who came by boatload wanted freedom and opportunity and escape from authoritarian regimes and societal or religious constraints. The king. They were mostly common folk, committed egalitarians. Farmers, shopkeepers, craftsmen, ne’er-do-wells and frontier entrepreneurs, men and women putting a life — and a country — together, from the ground up. They had no truck with royalty, blue bloods or highbrow elite. Despite their wanton exploitation of indigenous cultures and African slaves, the democracy they envisioned was a place without caste, class or the entitlement of birthright.

Such stories define us.

The American Revolution was an underdog’s leap of gutsy disobedience: throwing tea overboard, inciting insurgency against a world power, then gathering a ragtag band of volunteers to take up arms against autocratic authority, waging guerrilla warfare against fancy-clad mercenaries, a citizen militia achieving independence from the monarchy.

From this was forged a nation prescribed by representatives, thinkers and statesmen who emerged from a populace of commoners dedicated to a government of the people, by the people and for the people. A democracy constructed of an amalgam of checks and balances so that no tyrant, no single power, no cabal of insiders could rule or reign. An ethos of grassroots counteraction.

The American mythology many of us learned in elementary school was populated not by an elitist intelligentsia or ruling class, but by the likes of Davy Crockett and Daniel Boone, Abe Lincoln, Paul Bunyan and Natty Bumppo, the backwoods adventurer out of James Fenimore Cooper’s Leatherstocking Tales. Our heroes were plain folk — Ishmael, not Ahab — down-to-earth, ingenuous pragmatists with disarming common sense and no patience for the snooty and pretentious, the pompous and the highfalutin.

In fact, the classic American storyline has often posed common people in conflict with the powers that be, confronting arrogant authority figures, sparring in courtrooms and boardrooms with the rich and imperious. Think Charlie Chaplin as the Little Tramp, Jimmy Stewart as Mr. Smith going to Washington, Tom Hanks as the wise fool, Forrest Gump. We relish the potency of plain-speak against showy erudition, the intrepid individualist taking on The System, wing-clipping conformity, the rich and powerful.

In The Adventures of Huckleberry Finn, Mark Twain’s iconic American novel, Huck rafts the Mississippi River with a runaway slave and anguishes over his dilemma. The legalities of the Fugitive Slave Act and the moral codes of society argue for Huck to return Jim to his owner. But his realization of Jim’s humanity plagues his conscience.

As events press Huck to make his climactic decision, he listens to his own sense of justice. “I was a-trembling, because I’d got to decide, forever, betwixt two things, and I knowed it. I studied a minute, sort of holding my breath, and then says to myself: ‘All right then, I’ll go to hell’ . . . It was awful thoughts and awful words, but they was said. And I let them stay said; and never thought no more about reforming.”

In Twain’s time a “huckleberry” was a bumpkin, a hayseed, a yokel, a clown. It was the author’s intention to put such down-home wisdom into the head of a social outcast. A mere waif, yet wiser than society’s compelling influences. This dynamic ran throughout Twain’s work — the simpleton’s homespun logic exposing the troublesome dictates of racism, religion and social convention. Twain’s storytelling helped shape the American character for generations. Will Rogers and others would carry the tradition further, flinging darts of plainspoken truth at targets of artificiality, pretense and posturing.

In that great American narrative, The Grapes of Wrath, John Steinbeck gives the Joad family a measure of integrity despite their poverty and primitive ways. Drought has created Dust Bowl conditions in Oklahoma. Mechanized farming and zealous production — endorsed by the experts at the time — have ruined the land and prevented tenant farmers from keeping up with their loans. When bill collectors come for the money and threaten to evict the struggling Okies, the talk turns to the conflict between the rural folks who work the land and that amorphous “monster,” the bank.

It’s a dialogue that reverberates today:

Sure, cried the tenant men, but it’s our land. We measured it and broke it up. We were born on it, and we got killed on it, died on it. Even if it’s no good, it’s still ours. That’s what makes it ours — being born on it, working it, dying on it. That makes ownership, not a paper with numbers on it.

We’re sorry. It’s not us. It’s the monster. The bank isn’t like a man.

Yes, but the bank is only made of men.

It’s a recurrent theme in the American narrative — the little guy standing against an oppressive institution — be it bank, bureaucracy or major corporation. Wall Street versus Main Street. The individual versus society. Tarana Burke, maker of the #MeToo movement, in step with a long line of female champions: Harriet Tubman, Rosa Parks, Erin Brockovich and Crystal Lee Sutton, who fought against the textile industry and inspired the film Norma Rae. A regular person heroically taking on dehumanizing human institutions.

We pull for the underdog and authentic; we like it when the hoity-toity get their comeuppance. The thread runs through pop culture — whether it’s the bumbling, slow-talking Southern lawyer cleverly outwitting the hotshot, big-city attorney, or the genuine but uncultured in-laws deflating the pomposity of fancy weddings and country clubs. Or the blue-collar misfit lancing the pretentiousness on Ivy League campuses. We even prefer our lawmen to go rogue.

Hollywood good guys typically operate outside the law, breaking the rules to enforce them, going it alone (or with a single sidekick partner). These rumpled, scruffy, shaggy-haired undercover cops flout authority and follow their instincts and streetwise ways, disregarding by-the-book protocol and departmental procedures. They have little patience or regard for their officious, buttoned-down supervisors, and some fight crime while maneuvering through corrupt bureaucracies, making it up as they go, often with humorously disarming incompetence, Columbo-style, until good vanquishes evil.

We have long revered the mythical cowboy for similar reasons. He’s a virtuous yet solitary actor ready to take the law into his own hands. He is close to the land, weathered and wise from life, dismissive of the citified and sophisticated. He goes his own way. He is stoic in nature, reticent in love, adept at violence, unfettered by the bonds of societal expectations. He would pay no mind to anyone purporting to be an expert. Book learning is irrelevant in the machismo and brawn of the frontier West.

While the times and the scenery have changed, this streak of anti-intellectualism persists in our national consciousness today. It is who we are. Despite our emphasis on education, our support of the public arts and our celebrating those Horatio Alger stories of overcoming humble beginnings to achieve status and material wealth, our culture still sides with the common people — farmers and first responders, construction workers and factory hands, those pulling themselves up by the bootstraps.

We are suspicious of literati and the effete, the East Coast liberal media, even scientists. Our long arguments over Darwin’s theory of evolution and creationism have morphed into debates over climate change. We’ve come to associate science and the intellectual life with a sinister secularism draining the spiritual and religious from our national character. While we have long resented the rich, today’s yawning divide between a ruling class and the poor and middle class has sharpened into festering hostility. Where we once promoted education as a means of personal and familial enrichment, surveys now show a creeping suspicion toward higher education and the academic elite. Our faith in an American “meritocracy” has yielded to a belief that the system is stacked in favor of the wealthy, the privileged few, those with silver spoons and parents with pull and friends in high places.

Such resentments toward an intellectual and social elite have easily translated into surges of populism throughout American history. The same is true these days. The people — the folks we all know — feel powerless against the tides of change and the impersonal, behemoth institutions governing their lives. The frustrations are evident on the streets, in public discourse and on social media. As always, there are agitators tapping into this restless anger — and the need to beware of the rich and powerful stoking the culture wars to serve their own purposes and needs.