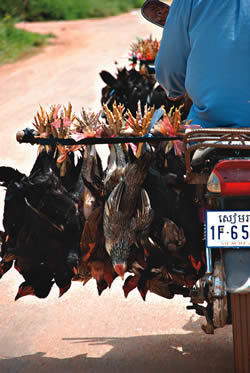 I never thought I’d ride, much less own, a motorcycle. My mom had hit one once with her Chevrolet Nova, breaking the driver’s leg and earning herself the only ticket of her otherwise immaculate career behind the wheel. Forever wary as a result, she drilled into my sister and me as we logged hours on our permits in suburban Detroit the importance of cutting a wide swath around anything with less than four wheels and an enclosed frame.

And yet here I am in Cambodia, 15 years later, astride my very own Honda Super Cub — not exactly a crotch rocket or chopper, but a motorcycle nonetheless. Thus far, I’m happy to report, my wife, Jacqueline, and I have only six scars between us as a result: two matching sets of road rash on our right knees and elbows (courtesy of a narrowly avoided crash and the ensuing pavement slide), one gash on my left leg (a souvenir by which to remember the first time we tried to fit three people on the bike at once) and the seemingly requisite exhaust pipe burn on the back of my calf (a rite of passage in Southeast Asia, and the only one, I assure you, I will ever sustain).

With shoddy brakes, a British racing green body, and a dinky, fuel-sipping 49cc engine capable of putting out a whopping 3.9 horsepower at 7,000 rpm, our refurbished Cub made its way into our hearts immediately. Honda has made the model since 1958 and, as of three years ago, had sold more than 60 million, making it the best-selling motor vehicle of all time. The thing’s basically indestructible, is a breeze to drive and certainly gets one from A to B.

The journey between these points has been an education.

A typical morning finds me kick-starting our bike and heading to Caltex, a nearby gas station that makes a mean iced coffee. First gear gets me across the gravel to our gate, second suffices as I negotiate the gauntlet of potholes and mud pits on our street, and third (the highest) propels me out onto Road #6 and into the throng of Khmer people wending their ways through the quiet chaos of traffic in Siem Reap. A few haul tranquilized pigs slung sideways across the backs of motos, tongues dangling. Some transport dozens of chickens suspended by their feet, beaks inches from the ground.

Others don the pale peach oxfords of tour guides, the green coveralls of street sweepers or the varied getups that the town’s dozens of resorts have their porters wear so that tourists on tuk tuks, motorcycles trailing little one-axle wagons, already heading back from watching the sun come up over Angkor Wat, feel like they’re getting an authentic experience during their five-star stays. Skinny security guards in navy uniforms head toward shops, banks and other businesses, where they will stand with their nightsticks, looking like dispensable extras in an action movie.

Children on bikes too big for them — just the tips of their flip flops touch the pedals at the bottom of each revolution — either sport the smart white-top-blue-bottom combo schools require or, in stark contrast, the ragtag garb of trash sorters. Pickup trucks overflowing with people barrel to and from Poipet, the sleazy border town a few hundred kilometers away that serves as a gateway to Thailand and its promise of better (albeit risky and undocumented) earnings. Occasionally a spotless black Lexus SUV with state plates and tinted windows zooms past, horn blaring.

Wherever they’re headed, whatever they’re wearing, most of Cambodia is up with the dawn and moving with purpose, dodging one another with a stoic ease that still escapes me.

Initially, there was shock. Like anyone who had just made the trans-Pacific flight would be, Jacqueline and I were in a jet-lagged fog last March when we braved the streets of our new home for the first time. To our further disadvantage, we were coming from a nation where cameras take pictures of our license plates when we misbehave at intersections, after which Big Brother mails us a ticket. Not so in the Kingdom of Wonder, where pretty much anything goes when it comes to driving. In any lane, at any moment, any kind of vehicle can be found going in just about any direction. For the first several minutes, this was quite alarming. Until we realized the first rule of the road — the one with less inertia simply swerves aside. It isn’t order, per se, but it jives with instinct and is a relatively reliable (if not so relaxing) method.

Next came fascination. Someone carrying a full-size refrigerator on a moto. Seven people on one moto. A patient on the way home from a clinic holding an IV above her head riding on the back of a moto. Transportation is just different here, and the swarm of activity, with its close calls and oddities, can be a spectacle to behold. This stage can last a while, and indeed most visitors spend their handful of days here happily enjoying what there is to see, documenting when possible the more outrageous examples for Facebook posts and travel blogs. If they miss the shot, picture books capturing the classics are sold in shops downtown and at the airport.

But then there’s me — an island of anger in a sea of calm. As any of a number of eventualities forces me to screech to a halt, I seethe and look at the drivers around me to share a moment of exasperation. Instead, I encounter only smiles. This adds embarrassment to irritation, and a barrage of criticism (internal unless my wife happens to be with me, in which case she is the lucky witness) is unleashed. Wouldn’t a traffic signal solve a lot at this intersection? Why can’t there be a system? Wouldn’t it make sense to look to see if other vehicles were coming before pulling out? Why doesn’t all of this bother anyone else?

On one such occasion, Jacqueline gently suggested the obvious, using the special second-person-singular-disguised-as-first-person-plural code that spouses sometimes do: “What if we try not letting it bother us?” A good idea, but so much harder than it sounds.
Whether we had ever stated or consciously thought it, we came over here to fix things. I was armed with a recent Master’s in Nonprofit Administration from Mendoza and a healthy dose of the Notre Dame spirit, and my wife and I had 10 years of experience working at the Center for the Homeless in South Bend between us, so we quit our jobs and sold our house to use what we had learned to help a developing country — benevolent enough in terms of motivation.

It’s the execution that’s been unexpectedly difficult. As much as I know about the way things could be in Cambodia, I recognize more and more each day that I have a lot more to learn about the way things are. And while I’m here to show local staff at a grass-roots educational organization founded by Daniela Papi ’00 how to operate more effectively, the Khmer people are teaching me larger lessons on how to manage myself.

Maybe my frustration with the traffic is a symptom of the sneaking suspicion I’ve had that this country might just be getting along fine without me. They don’t do things the way I’m used to, and somehow they’re a lot less alarmed by it than I want them to be. Yes, things could be better here. Corruption, especially of the low-level, bald-faced variety, is rampant. The education system is insanely under-resourced. And in the wake of the recent genocide, both a sense of fatalism and a lack of critical thinking understandably pervade the adult population, making change an uphill battle. These factors add levels of complexity to the work we do but don’t detract from the beauty and poise that persist in this place — a reality which challenges not only my technical abilities but also, and more important, the way I live out each day that I’m given.

Sure, Siem Reap could use a few more stoplights and a police force that does more than sporadically set up checkpoints and levy arbitrary fines to passersby. But from the seat of our Honda Super Cub — the starter of which was recently fixed by a mechanic using only a needle and a cigarette filter, by the way — it sure seems that resourceful, graceful Cambodia is more tutor than pupil. And when Jacqueline and I are once more back in the land where road rage is routine, I hope I’ll once again be the odd man out, this time the inexplicably unfazed one sitting patiently behind the wheel.

Adam Kronk and his wife return from Southeast Asia this spring with newfound gratitude for their family and friends from around the world.