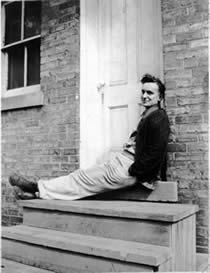 Joe Quinn ’37 studied business at Notre Dame, but he really absorbed economics the hard way. He and his fellow Domers struggled through the most devastating financial downturn in U.S. history — the Great Depression.

Now, 80 years after the stock market crashed in the fall of 1929, Notre Dame students are again facing difficult economic times. Despite dire reports in the press, however, today’s recession has not sunk to the depths of the Depression, when more than 25 percent of the work force was unemployed.

“It was a hard go for many boys then,” Quinn, now 93 and living in Andover, New Jersey, recalls. “They didn’t blow money and lived within their means. Students couldn’t afford trips to downtown South Bend, even if they had permission from the college. We were very frugal. Some could not afford a few pennies for a newspaper.”

Many Domers lived in Chicago, 90 miles to the west. It could have been a million. Not only was the cost of traveling home prohibitive, but the students didn’t know if a hot meal or warm room awaited them, Quinn remembers. So they spent weekends at the college, where they were at least guaranteed the amenities that students take for granted today.

In Notre Dame Remembered, Edward Fischer ’37, now deceased, wrote of his arrival in South Bend in 1935 as an impoverished student from Kentucky with a junior college diploma. A nun back home predicted correctly that he would make a fine writer and insisted he had to go to Notre Dame — despite his protests that his family couldn’t afford it.

She wouldn’t take no for an answer.

She ordered him to march into the office of the University’s president, Father John O’Hara, CSC, and ask for help. O’Hara found him a job working for a medieval history professor. Later, Fischer got a night job at a newspaper downtown — but he had to get a dispensation to come home late after the dorm was locked up for the night.

Even with two jobs, he still wasn’t a rich man. Fischer recalls in his book the night in 1935 when the great heavyweight boxer, Joe Louis, fought Max Baer. None of the students could afford a radio.

“We sat outside Corby Hall and a rector opened up a window so we could listen to his radio,” Fischer wrote.

Robert Pelton ’43, who years later as a Holy Cross priest became chair of the theology department, arrived as a freshman in 1939 and lived in a dormitory in the Main Building that housed 75 men. At night, he recalls, curtains were hung between the beds like temporary walls “for privacy.”

Richard Savage, 101, the last survivor of the Class of 1930, says he was lucky. He graduated before the full impact of the Depression hit South Bend. But he notes, “A number of students did not return for the spring semester in 1930.

“You didn’t know why. You assumed they couldn’t afford it.”

According to Robert Burns, professor emeritus of history, in his book, Being Catholic, Being American, the lay faculty was suffering, too.

“Conventional wisdom would have us believe that Notre Dame didn’t terminate lay faculty nor cut lay faculty salaries during the Depression. That may have been true after 1934 but was not the case from 1930 through 1933.”

Burns said all lay contracts were for only one year “so any faculty member could be terminated by not renewing his contract. No special explanations were given or expected.”

The college did come up with scholarship money in the 1930s, drawing upon a sizable number of affluent alumni who contributed to fundraising drives even during the Depression. A New Deal program, the National Youth Administration, also briefly provided subsidies.

Students’ costs by today’s inflationary standards were a pittance. A total of $650 covered undergraduate tuition, room, board and laundry.

Joe Quinn managed to graduate — and two years later, a young man who was to have a profound impact on the University, Theodore Hesburgh ’39, did, too. Hesburgh spent the later years of the Depression as a seminarian, either at Notre Dame or in Rome. The Congregation of Holy Cross covered seminarians’ basic costs, but Hesburgh did not even have enough money to buy a cassock.

“I had to bum one,” he recalls. Hesburgh’s family couldn’t help, as it was struggling through hardships of its own, almost losing the family house in Syracuse. In a quirk of fate, he says, “the house caught fire, and the insurance money gave us enough to make mortgage payments.”

Despite the students’ spare circumstances, a casual visitor to campus during the 1930s might have concluded that the Depression had passed over Notre Dame. New buildings, including the law school, a science building, a laundry, a post office and an infirmary, were sprouting up everywhere in a $3 million construction program. Prominent benefactors had contributed generously, but President O’Hara also reached out to The General Education Board, later the Rockefeller Foundation, which had also given Notre Dame a grant in 1920.

This time, O’Hara had to reassure the foundation that the University would be efficient in using the funds. One idea pushed by the experts was not to begin any construction project before all of the funding had been raised, a Notre Dame concept that continues to this day.

The gem of the new buildings was the football stadium, which opened in 1930 at double the capacity of the old Cartier Field. It was a monument not only to the great teams assembled by legendary Coach Knute Rockne, a 1914 graduate, but also to his consummate marketing skills. Rockne seemed a money magnet for the University. In 1919, reports history Professor Rev. Thomas Blantz, CSC, ’57, ’63M.A. the football team brought in gate revenues of about $200. By 1929 that figure had soared to $500,000.

The Fighting Irish played all nine games on the road that year while the new stadium was under construction. Everyone wanted to pay to see them, stock market crash or not. The Irish played before huge crowds in Chicago, New York and Baltimore, building up their down payment on what would become an era of institutional stability in hard times and establishing an income stream that helped bankroll the Depression-era expansion of the campus.

Kate Bird and Joe Volz are a wife-and-husband freelance writing team from Frederick, Maryland. Kate’s father, Otto Bird, brought the Great Books program to the University in 1950. Volz is graduate of Rutgers, the state university of New Jersey.

Photo of John Sudol, ND Class of 1932, from the University of Notre Dame Archives.