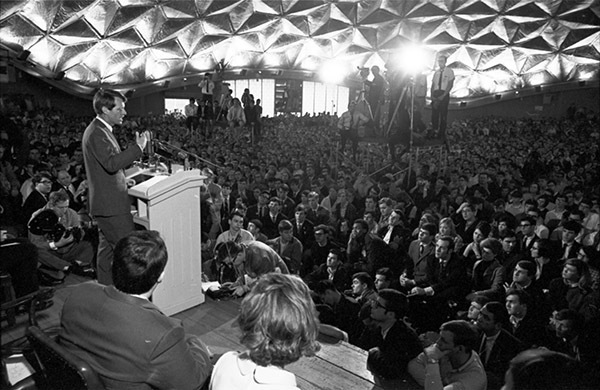 Robert F. Kennedy came to Notre Dame on April 4, 1968, his first campaign stop in Indiana before the state’s upcoming Democratic presidential primary — an election he had to win for his late-entry candidacy to be viable. His day began at Stepan Center, addressing an overflowing crowd of frenzied students. It ended on a cold, rainy, inner-city street corner in Indianapolis, where he had to inform a throng that Dr. Martin Luther King Jr. had just been murdered in Memphis, Tennessee.

An unlikely presidential candidate in 1968, Kennedy had emerged as the country’s political winds shifted toward issues that had come to be important to him. A year after the 1963 assassination of his brother, President John F. Kennedy, the former U.S. attorney general won election as a senator from New York. The younger Kennedy then turned much of his focus toward the problem of poverty.

According to Thurston Clarke’s book, The Last Campaign, Kennedy had found a doodle among his late brother’s effects with “poverty” written in bold capitals. He framed it. With that as inspiration, he became more involved in improving the plight of the poor in the United States.

As the 1960s unfolded, social strife increased over poverty, civil rights and the war in Vietnam. President Lyndon Johnson became embattled on all fronts and was challenged from within his own party for the 1968 Democratic presidential nomination. Sen. Eugene McCarthy of Minnesota, a staunch anti-war activist, became a favorite among college students.

Kennedy also had become an increasingly ardent critic of Johnson and his Vietnam policies and began thinking about running himself. According to all accounts, he felt conflicted but compelled and announced his candidacy on March 16, less than eight months before the general election. Two weeks later, Johnson declared that he would not run.

As a latecomer, Kennedy still had to play catch-up to McCarthy, who had begun his campaign the previous November.

“It was a startling adventure,” Kennedy biographer Arthur M. Schlesinger Jr. later wrote. “Robert Kennedy had no campaign staff, no national organization, no delegates, almost no promises of support.” 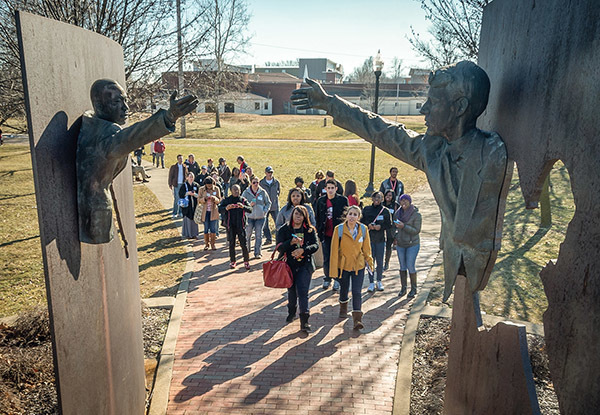 Kennedy visited 13 states in the first 10 days of his campaign, including trips to colleges in Kansas and Alabama. His first primary was Indiana — not the best scenario for his path to the nomination. As Clarke wrote, “No Northern state appeared to be less promising for a campaign focusing on poverty and racial justice than Indiana.”

“The firmament was extraordinary,” says longtime Seattle Post-Intelligencer columnist Joel Connelly ’69, who covered Kennedy’s on-campus speech as news editor of The Observer. Many Notre Dame students were fervent McCarthy supporters, but Kennedy’s entry into the race had a rousing effect on others, including some influential student body officers.

At midday on April 4, about 1,000 people met Kennedy’s plane at the South Bend airport. The South Bend Tribune reported that the crowd “screamed” and “squealed” when Kennedy got off the plane with his wife, Ethel. Crowds gathered as his open-air motorcade wound through town toward campus, and the situation became chaotic. According to the paper, two people suffered broken bones in the crush of humanity.

The scene at Stepan Center was no less frantic. The space allowed 3,800 seats, but an estimated 5,000 students crammed inside, with another 1,000 outside, many climbing up the roof to glimpse Kennedy when he arrived. Some wore buttons that said, “Bobby and Ara in ’68.”

David Krashna ’71, who would become student body president in 1970 and is now a judge in Oakland, California, recalls waiting outside Stepan and barely squeezing into the building to hear the speech. Kennedy himself had a hard time maneuvering inside.

Connelly remembers Kennedy being introduced as “the ultimate” and “the next President.”

The speech, “Feeding America’s Hungry,” drew a connection between addressing poverty and fulfilling America’s founding promise. Kennedy challenged his audience to become part of the solution.

“If we cannot feed the children of our nation,” he said, “there is very little we will be able to succeed in doing to live up to the principles which our founders set out nearly 200 years ago.”

The student reaction to Kennedy’s remarks, which ran 40 minutes with questions, was “near adoration . . . resembling a football pep rally,” the Tribune reported.

Kennedy made an appearance at Ball State University that afternoon, then traveled to Indianapolis for a nighttime rally that was to include African-American community leaders. As he arrived in Indianapolis, he was informed that King had been shot and killed in Memphis. After its promising start at Notre Dame, Kennedy’s first Indiana campaign day had turned into one of the darkest nights in American history.

The crowd did not know about King’s assassination until Kennedy told them. He discarded his prepared speech and spoke from the heart to a gathering of 2,500 people. Above gasps from the crowd as supporters digested the news, he delivered extemporaneous remarks now considered among the greatest speeches in American history, credited with helping to keep the peace in Indianapolis while other cities erupted in rioting.

Kennedy spoke for five minutes, urging the audience, especially the African-Americans who might be filled with hatred toward white people over King’s murder at the hands of a white man, to seek peace in their hearts. He called for prayers for King and for understanding and compassion throughout the country.

“I can also feel in my own heart the same kind of feeling. I had a member of my family killed . . . by a white man. . . . The vast majority of white people and the vast majority of black people in this country want to live together, want to improve the quality of our life, and want justice for all human beings that abide in our land. And let’s dedicate ourselves to what the Greeks wrote so many years ago: to tame the savageness of man and make gentle the life of this world.”

Kennedy went on to win in Indiana. Two months later, on June 5, his victory in the California primary positioned him as the presumptive Democratic presidential nominee. When he was shot that night in a Los Angeles hotel kitchen and died the next day, the nation lost another eloquent voice of peace and equality.

The assassinations of King and Kennedy are entwined in the history of a troubled time. They are also connected in the American mind through the causes they championed. Their examples continue to inspire the pursuit of “justice for all human beings that abide in our land.”

David Dreyer has been a state court trial judge in Indianapolis for over 21 years. He is a founding member of the Kennedy King Memorial Initiative that supports education regarding RFK’s speech in Indianapolis.