We often think of great engineering achievements as iconic structures that impress and awe — the Colosseum, Great Pyramid of Giza, Taj Mahal, Great Wall of China, Hoover Dam. The following systems, however, are the real engineering marvels of our time. They enable us to expand our reach, explore, discover, communicate and live healthy, high-quality lives. These evolutionary ideas have become so interwoven in our everyday existence that we take them for granted, but they are the foundational building blocks of our civilization and economy.

Clean Water. The delivery and management of clean water is essential to our quality of life. From our beginning we simply drew water from streams and wells. We went on to develop technologies to distribute and pump it through aqueducts, tunnels and pipe networks, and treat it using filtration, chlorination, ultraviolet light or desalination. We learned how to store water in reservoirs and now are capable of providing enormous volumes of clean water to large population centers and massive agribusiness users. In the United States, we utilize more than 4,000 liters of water per person per day, and it is available by turning a valve or a faucet. But many people in this world are without clean water. Millions in Africa consume or use fewer than 20 liters per day of water that not only is often polluted but also must be carried several kilometers by hand. Clean and well-managed water eliminates sickness and death from diarrhea, typhoid, cholera, schistosomiasis, trachoma and malaria. Developing global clean water resources is the most important priority to achieve a just and peaceful world. 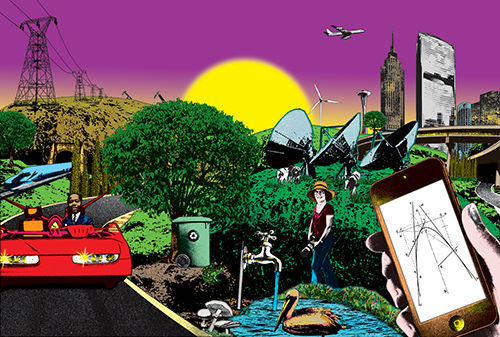 Waste. Once waste was dropped anywhere and everywhere, and was absorbed into the soil by natural bacterial processes, spurring the cycle of plant growth and food availability. Agricultural societies used animal manure as fertilizers. As population centers grew, waste was dumped into streets, streams, rivers and bays, causing illness and death from diseases such as typhoid and cholera, and decimating valuable fisheries. With the Industrial Revolution, toxins were added to the waste streams, resulting in cancers and genetic mutations. In the United States, the Environmental Protection Agency and the Clean Water Act spurred what today are advanced wastewater treatment plants. The Blue Plains facility in Washington, D.C., can treat 370 million gallons of sewage per day, enough to fill the 110-story Willis Tower. Advanced treatment plants, which use highly specialized bacteria to break down sewage, produce water clean enough to drink. New technologies are being developed to turn our waste streams back into resource streams, producing fertilizers as well as energy.

Buildings. From huts to houses to skyscrapers, we’ve been able to build higher and bigger, creating functional and sometimes majestic living, working and gathering spaces. We’ve built to accommodate concentrated and increasing populations on smaller and smaller footprints. We continue to learn how to make these buildings more resilient to natural and man-made hazards, including winds, earthquakes, riverine floods, tsunamis, storm surges and fires. The development of high-strength concrete and steel, and the use of complex composite materials, recycled materials and nanomaterials allow us to build stronger, better and more sustainably. And because buildings have limited design lives, we have developed elaborate monitoring systems to determine what needs to be replaced or repaired and when a structure reaches the end of its life cycle. With the use of response-control and electronic management systems, our once static and passive building structures have become dynamic, thinking ones.

Energy. Try to go one day without using engineered energy systems. Everything we do is made possible by the energy we are able to harvest from the sun, wind, water, oil, gas, natural gas, coal, wood, biofuels or nuclear fuels. Per capita energy use in the United States is over 300 gigajoules per year. This is equivalent to the energy expenditure of every person in the country carrying a sack weighing 145 million pounds to the top of the Willis Tower every year (or every person carrying a 44-pound bag up to the top of this 110-story building every 10 seconds, 24 hours per day, 365 days per year).

Transportation. The longest bridge, the fastest train, the deepest tunnel, the busiest airports: Each year we surpass previous records, carrying more people, covering more distance, and making stronger and wider global connections. Personal mobility has exponentially increased. It once took a whole year to travel from the East Coast to the West Coast in the United States, but today that can be done in five hours. Using a web of airports, ports, waterways, canals, rivers, highways, roads, railways, bridges and tunnels, one can really be in almost any place in the world in less than a day. And we don’t just move people. Our ability to move commodities from any part of the world to any other part is an amazing accomplishment. We have developed a global trade network that today allows the idea of using cacao beans from Belize, a wet grinder from India, cocoa butter from the Dominican Republic, sugar from Louisiana, molds made in Belgium and paper wrappers made in South Bend to become the reality of a chocolate bar within one week’s time. We’ve never been more globally connected. And the sheer numbers are rising. Goods coming into the United States from China alone make up 30 billion to 40 billion dollars’ worth per month, an amount that has doubled in the last 10 years.

Communication. From the development of language, from cave paintings to pictographs to writing, from smoke signals to drums to pigeon carriers, signal lamps, telegraph and telephones, wireless and radio, television, satellites, cellular phones, computer networks and the Internet, we have reached a point where one can stand in Tokyo with a GPS-enabled and computer-driven smart phone and video-conference with someone standing by the Grotto at Notre Dame. We can also transmit huge amounts of data — medical records with X-rays sent to an expert in another part of the country; documents detailing how an outbreak of disease is spreading; live coverage of sporting, entertainment or newsworthy events. With the engineering of satellites, microwaves and fiber optics we can dispatch even larger amounts of data in even shorter and shorter amounts of time. In 2014, a world speed record was set at Technical University of Denmark, transmitting 43 terabits per second using a new type of optical fiber. This is the equivalent of 940 DVDs or over one million books worth of content sent in just one second.

Data. What began as handwritten records, then printed books, then large libraries, growing repositories of knowledge and information, has become an electronic storage space that needs a new prefix — yotta, a digit with 24 zeroes — to describe it. These databases can be mined, explored, arranged and rearranged, and we can pull from them knowledge of how to do things or find out what’s out in the world. We can collect data and analyze it and thereby forecast the weather, schedule food distribution, probe historical records, understand earth systems, map genomes, and locate the world’s oil and gas and mineral resources. We also can make maps using GPS or schedule everything to do with an airline — where the planes are, where the pilots and personnel are, how to fill each plane with passengers, how to fly and land them safely. On a personal level, we can mine this data to check a foreign train schedule and discover where to catch a bus to get to that train, or find out a store’s address and learn what products are available.

Simulation. Descriptive mathematics now serve as a basis for understanding the physical world around us. Arithmetic, geometry and algebra evolved from the Egyptians, Babylonians and Greeks. This was followed by the development of differential calculus and foundational physical laws in the 17th century by Newton and Leibniz, who revolutionized how complex dynamical systems can be described. Nonetheless, solving these mathematical problems was difficult at best. With the mid-20th century advent of computers and the exponential increases in computer power through the years, we can simulate and explore increasingly intricate geophysical, mechanical, chemical and biological systems. Modern computing gives us the ability to analyze and predict how global scale to nanoscale systems work and how they will perform. We can simulate weather systems, climate, hurricanes, earthquakes and tsunamis as well as study a building’s motion during earthquakes; a tunnel’s resistance to enormous loads; traffic flow evacuation patterns during disasters; the birth, life and death of a star system; plate tectonics; the pumping capacity of a reconfigured heart; the development of an aneurysm; or complex biochemical reactions and bacterial film growth.