As horse-race polls — nationally and in battleground states — tighten between Hillary Clinton and Donald Trump, two other numerical findings in recent days shouldn’t gallop by without our taking notice.

Surprising as it might seem for anyone who’s followed the long, winding 2016 presidential campaign, some 13 percent of all voters remain undecided, according to a recent Wall Street Journal /NBC News survey. Having that many souls still wrestling with a decision is unusually high this close to Election Day. 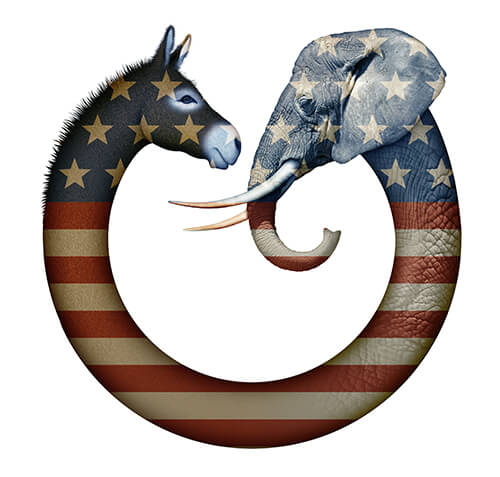 In another poll (this one conducted by ABC News and the SSRS Probability Panel), 23 percent of respondents said they expect the debates between Clinton and Trump “to have a major impact on their choice for president.”

Taken together what these two surveys suggest is that the rhetorical face-offs — on September 26, October 9 and October 19 — could play a significant role in determining America’s 45th president. This year the contrast between the Democratic and the Republican contenders is eye-poppingly evident to anyone with minimal exposure to the daily flood of campaign news.

From her experience in Washington and within government, Clinton is fluent in policy parlance and able to decode all the acronyms of the federal bureaucracy. She’s been an insider so long that citizens suspicious of governmental power are, in turn, often suspicious of her.

From his experience as a real estate impresario and media personality, Trump knows how to keep television camera trained on him whenever he ventures out in public. To many people, his “act” of campaigning might seem an endless loop or constant re-run, but for others his never-shy, always-vivid persona, along with the intrigue of unpredictability, arrests attention.

In short, while Clinton comprehends the workings of government, Trump trades on his communications acumen. For the three debates, what expertise will prove most important, even decisive?

At this point in the White House race, the two candidates are within the margin of error in most national surveys, with Clinton in much better Electoral College shape. Besides the healthy number of undecided voters, what’s also curious is the degree of disenchantment among Republicans and Democrats.

Some 43 percent of those who identify as Republicans don’t consider Trump the best choice as the nominee, while 41 percent of Democrats think likewise about Clinton, according to a mid-September survey for Morning Consult, an internet-based journalism and research operation in Washington. Will these nearly identical opinions of bipartisan unhappiness depress voting for president this year? Or will the debates change the attitude of large segments of the electorate?

Given the open-seat election, the close nature of the race and the pronounced differences between the candidates, viewership should exceed traditional audiences for the televised encounters over the next few weeks. The truly undecided can take the measure of Clinton and Trump to see if either displays the sense of command that’s needed to make decisions in the Oval Office and on the world stage.

Sufficient knowledge of the issues to provide a coherent response to a question is essential, but the delivery — the projected image while speaking — also comes into play, affecting how those watching react to each debater.

The first presidential debates in 1960 between John Kennedy and Richard Nixon provided an enduring lesson about the differences of opinion that different media produce. People listening on radio thought Nixon won; those watching on television were certain Kennedy was the victor. As the 1960s communications guru Marshall McLuhan wrote shortly after the debates, “Without TV, Nixon had it made.”

As Nixon learned, emphasizing content over comportment — wonkish words at the expense of an appealing visual impression — comes at a high price.

This year’s election, with its countless variables, poses new and challenging problems for the debate moderators. At the recent Notre Dame Forum on campus, “Debating Our Future,” veteran CBS News anchor Bob Schieffer speculated about a line of questioning he would pursue if he were asked to be a moderator, a role he’s filled in prior years.

Noting that neither candidate is well liked by the public, Schieffer explained, “We’re at a point where our whole political infrastructure has collapsed, frankly, and how is it that the campaign came down to these two candidates? That’s the question I hear more than any other question, and it might be interesting to ask the candidates, ‘Why do you think it’s come down to you two?’”

Schieffer’s pressing yet fundamental concerns — which would elicit responses about the state of American politics and the figures leading each major ticket — might also provide the public with a glimpse into the future. Will either Clinton or Trump be a welcome presence on television screens for the next four years, and do they demonstrate what it takes to exert presidential authority at times of crisis?

By their nature, debates, complete with all the rhetorical arm wrestling, raise questions and try to answer doubts. The ones this year come with considerable, if not great, expectations. They also promise something else: uncertainty and the unexpected.

Post-debate update: Listen to Professor Schmuhl comment on polling and reactions in this September 28 interview for RTE’s Morning Ireland.