Editor’s note: In the summer of 2016, as the presidential candidates entered the stretch run of campaign season, we asked Notre Dame’s in-house pundit to put the moment, the issues and the choices in context and perspective. Bob Schmuhl’s commentary on American politics and journalism frequently appears in major print and broadcast outlets in the U.S. and abroad. His observations on the 2016 presidential election and transition have run on magazine.nd.edu every two weeks.

The Chicago Tribune that circulated on the Notre Dame campus the morning after this year’s election carried a bold, one-word banner headline: “CLIFFHANGER.” With a deadline to meet before Hillary Clinton conceded to Donald Trump, the newspaper did what it could, offering a clarifying subhead: “Clinton, Trump fates hang on Midwest states.”

Inside the Tribune that Wednesday, though, there was little doubt who would win. Occupying more than half of page 15 was an article focusing on the 2020 presidential prospects of the Republican Party. Looking beyond Trump, the dispatch (written by a Washington Post reporter) featured a dozen potential candidates, with 10 of them pictured. Oops. 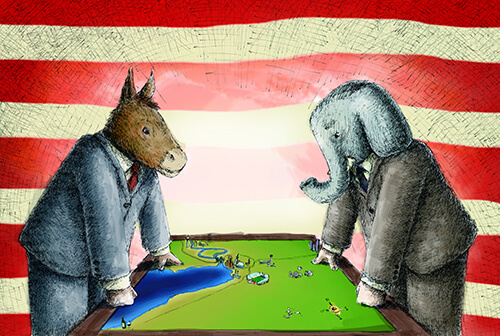 Certainly not in the same league as the 1948 Tribune whopper “Dewey Defeats Truman,” this year’s story — described as “Republican leaders already eye the next presidential election” — shows that even in GOP quarters the outcome of 2016 was a foregone conclusion.

But by the time the presidential and other electoral results became known, Democrats were wringing their hands, scratching their heads and wondering what their party’s fortunes might be. Beginning in January, the White House, the House of Representatives, the Senate, and 33 governorships will all be controlled by Republicans.

Barack Obama’s legacy will be a topic of lively debate as soon as he moves out of the White House. Indisputably, one of his lowest grades will be recorded for his stewardship — or lack thereof — of his own party.

After his first election in 2008, Democrats enjoyed majorities in the House and Senate, with 257 House members and 57 in the Senate. Sizable losses in the mid-term elections of 2010 and 2014, along with this year’s results, now put 194 Democrats in the House and what’s expected to be 46 in the Senate, with another two independent senators currently caucusing with the Democrats.

In 2009, there were 29 Democratic governors. In 2017, there will be 16, assuming the tight North Carolina race flips from the Republicans. Since Obama became president, according to the National Conference of State Legislatures, Democrats have lost 919 seats in legislative bodies across the country.

To put that number in perspective, in 2009 Republicans controlled nearly 44 percent of state legislative seats. After the 2016 election, the percentage has jumped to 56. This means a strong farm team is already in place and playing the political game for the GOP.

A superstar campaigner in both his White House races, Obama possesses what you might consider to be Teflon coattails. Efforts to help other Democrats rarely seem to stick.

As the ranks of Democratic officeholders dwindle, where the party turns for leadership is a significant concern. Will Democrats look to their most recognizable figures, or decide to seek out new, possibly younger, members to rebuild a much-weakened political institution?

In the House of Representatives, for instance, Nancy Pelosi was re-elected minority leader the other day, the eighth consecutive time she’s won the support of her caucus to be the top House Democrat. Pelosi is 76. Minority whip Rep. Steny Hoyer is 77. The assistant to the leader (or No. 3 person) is Rep. James Clyburn, who’s 76.

Pelosi received a leadership challenge from a younger member this year. Is that a harbinger of unrest in the ranks and the desire for change next time? Probably so.

Internally, the election of a new chair of the Democratic National Committee in late February will possibly end up being a contest between the “establishment” forces of the Obama White House versus the party’s more “progressive” wing, most visibly represented by two senators: Bernie Sanders and Elizabeth Warren. (Should you be looking ahead and counting, Sanders will be 79 in 2020, Warren will be 71 — with Trump 74.)

No matter how dynamic or inspirational the new lineup of Democratic leaders might turn out to be, they will need a compelling message that connects with voters and propels people to the ballot box in 2018 and 2020. Most analysis of Clinton’s loss revolved around her inability to deliver definite reasons to support her in key battleground states, particularly Pennsylvania, Ohio, Michigan and Wisconsin.

Trump won largely because what he said made sense economically to working class whites and others in those contested states. There’s a liberal dose of irony in having a “blue-collar billionaire,” as someone called him, becoming the champion of “the forgotten men and women” in America.

But Trump’s message resonated and brought out people who hadn’t voted in recent elections. The outsider’s outsider, with no governmental or military experience, spoke a language of change in meaningful ways to dispirited and angry voters.

Reports of Trump’s premature political death proved to be greatly exaggerated. Indeed, as matters stand today, members of the Democratic opposition might associate themselves with a remark of the late humorist Will Rogers: “I am not a member of any organized political party. I am a Democrat.”