DUBLIN, Ireland — Being an American abroad these days provides someone with a perplexing yet recurring experience. Wherever you go, people beyond our shores want to know why the American presidential campaign is approaching its conclusion as a political popularity contest between two historically unpopular candidates.

As a nation of about 325 million people — with nearly 226 million eligible voters — the United States leaves Europeans puzzled. How have Democrats and Republicans not chosen standard bearers stronger and more liked than Hillary Clinton and Donald Trump? 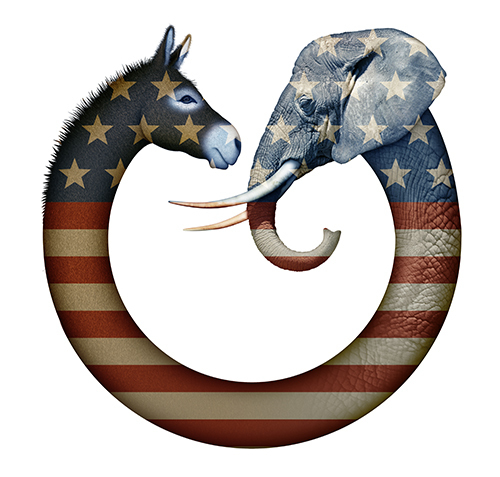 As they inquire about the situation in America, many also sheepishly confess that the race provokes something of a morbid fascination for them.

They’re well aware of Clinton’s email controversies, questions about the Clinton Foundation and her recent health issues. These concerns, however, take a backseat to their animated reactions to Trump’s latest assaults via social media or what he alleges, with such gusto and histrionics, at his rallies. “Can he be serious?” they want to know

To discover that the world is closely watching this year’s U.S. election is instructive in itself, but it also forces anyone on the receiving end of queries to try to come up with explanations concerning the unprecedented contest.

It’s difficult, bordering on impossible, to make a case for the reasons Clinton as Secretary of State conducted official government business by using a private internet server in her home rather having a home server for personal communication and relying on the State Department’s technology for diplomatic dispatches. Clinton has called what she did a “mistake,” and you hear agreement on that point from those without a stake in seeing her win or lose.

The murky dealings of the Clinton Foundation, again while she served as Secretary of State, defy simple analysis or justification. Yet until there’s definite evidence of a quid pro quo of solicited support resulting in the State Department taking action on behalf of a contributor, all the smoke is swirling around without an identifiable fire.

At times, the best a pundit-visitor can offer inquiring minds abroad is that marriage to a former president is complicated — but by no means exonerating. Government business is the public’s business and subject to scrutiny and transparency. Doubts still linger.

Trump is in a league of his own as an object of risible befuddlement. How did someone who’s primarily known as a wealthy developer and reality television star receive the Republican nomination for the White House?

A recent poll in The Irish Times reported that 82 percent of Irish men and women wanted to see Clinton elected, while a mere 6 percent selected Trump, with 12 percent not knowing how to respond. Despite the paltry level of support, he generates more discussion than a Kardashian.

Stripped to essentials, a visitor tries to explain, the builder-celebrity is the beneficiary of two powerful emotions that animate his supporters. They boil with anger, if not fury, at the current state and direction of America. By and large, they are anti-Washington, anti-establishment and anti-politics-as-usual. They are demanding change.

The other emotion is hatred, and that hatred is directed like a large laser at Clinton and those around her. Trump’s personality and speeches fuel both emotions and keep what he refers to as his “movement” together.

To confess: Such analysis goes just so far. I tried it out on a Dublin taxi driver the other day, and he reacted by saying, “If you were marooned on a desert island with Trump, I think you’d soon lose the will to live.”

What’s clear after two weeks of watching the campaign from across the Atlantic is that the political standing of the U.S. on the world stage is definitely on a downward slope. In prime time the other evening the BBC aired a probing hour-long documentary titled “Trump v Clinton: Divided America.” Prospect, a serious British monthly, devotes its November cover to articles exploring “The Anger Eating America.”

The Irish magazine Village features a Photoshopped picture on the front of its October issue with Clinton and Trump sitting in what’s termed the “Trash can of history.” Above their heads appear six words: “If only they both could lose.” It’s not exactly a sentiment to unfurl flags.

But history teaches that America is a resilient nation. Neither the Vietnam War nor Watergate, damaging though they were, prevented the U.S. from making a strong comeback in the 1980s and 1990s.

More than anything, this presidential campaign, followed so closely at home and abroad, exposes the need for electoral reforms in the nominating and fundraising processes influential to the outcome of a White House race.

Here’s the prime question everyone should ask after November 8: Will we learn from what’s happened in 2016 and make the kinds of changes that lead to a renewal of purposeful democracy in America — one that’s respected around the world?