Dominus Flevit (“The Lord Wept”) names a chapel on the Mount of Olives overlooking Jerusalem. It commemorates an event recorded in the Gospel According to Luke, where Jesus is said to have paused during his triumphant approach to the city from the towns of Bethany and Bethphage in the east. Surrounded by his disciples, honored with raised palm branches, hailed with cries of hosanna as the son of David, Jesus stopped on the way, saw the city, and wept over its coming destruction (Luke 19:41-44).

On Friday, March 17, 2017, together with 18 Notre Dame undergraduates and seven other pilgrims, I participated in a Holy Mass concelebrated there by Father Gary Chamberlain, CSC , Father Andrew Carl Wisdom, O.P., and Father Gregory Tatum, O.P. Facing the altar, we beheld through a clear window the city stretched out majestically before us. Our vision aligned with that of Jesus, we faced the Temple Mount. The Temple itself was razed to the ground by the Romans in 67 A.D., as Jesus tearfully foresaw. Holy to the Jews, the mount on which it once stood is now the site of the Muslim “Dome of the Rock,” marking the place from which the prophet Muhammad is said to have ascended into heaven. Its golden dome stood prominent in the vista before us. 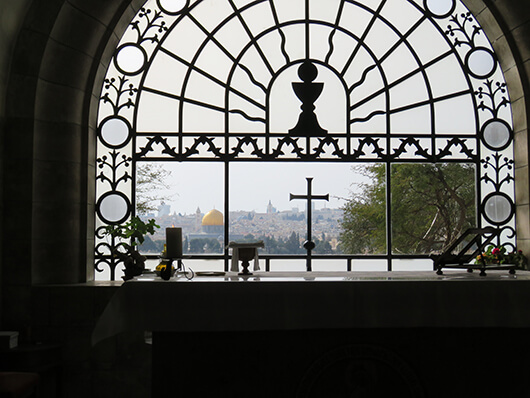 Dominus flevit. The Gospels record that Jesus was twice moved to tears. Sorrowing with the sorrowful, he wept over the death of Lazarus, whom he loved (John 11:35). Approaching Jerusalem, he also wept — a measure of his great love for the city and its people.

I had forgotten that Jesus wept over Jerusalem and prophesied its destruction in the midst of the triumphant ride that we commemorate every Palm Sunday. The people hailed him as king, laying their cloaks on the path over which donkey and colt carried him, but Jesus spoke to them in the very hour of their exultation, lamenting, “you did not recognize the time of your visitation from God” (Luke 19:44). The city named for peace (salem, shalom) would know a terrible violence. Jesus’s view of the city on that day was also a vision of its future.

That prophetic vision must have extended beyond the time of the Roman destruction of Jerusalem in the first century. Jesus must have foreseen it all, from the violence of the crusades to the Six Day War of 1967, to the present-day tensions and terrorism. Dominus flevit. “As he came near and saw the city, he wept over it” (Luke 19:41).

He wept, but he continued on his way into Jerusalem, uniting his destiny with that of the city and its Temple. Coming down from the Mount of Olives, Jesus must have entered the city through its eastern gate, the Golden Gate. Clearly visible from the spot where we overlooked the city, the Golden Gate is sealed. Closed by the Muslims in A.D. 810, reopened by the crusaders, it was walled up again by Saladin in 1187 and by Suleiman the Magnificent in 1541. It has remained closed for over four centuries.

Why did Jesus enter through that particular gate on the day of his triumph, when people openly hailed him as Messiah and king? Saint Matthew writes that he rode into Jerusalem as its king aback a donkey and a colt in fulfillment of a prophecy (Zechariah 9:9). Another prophecy, Ezekiel’s mystical vision of the new temple, relates: “Then [the angel] brought me to the gate, the gate facing east. And there, the glory of the God of Israel was coming from the east” (Ezekiel 43:1). The prophet further observes, “The vision I saw was like the vision I had seen when he came to destroy the city,” and writes later that he saw the eastern gate sealed shut: “This gate shall remain shut; it shall not be opened, and no one shall enter by it; for the LORD, the God of Israel, has entered by it.”

Jewish, Christian and Muslim traditions all associate the eastern gate with the approach of the Divine, with the coming of the Messiah. Following the Proto-Gospel of James (circa A.D. 150), Christian art frequently depicts the parents of the Virgin Mary meeting at the Golden Gate with a kiss and an embrace, heralding her Immaculate Conception. Destined to be the porta coeli, the “gate of heaven,” Mary is the one who will welcome the God-Man, the Incarnate Word of God, into the world. She is also a sealed gate, ever virgin, for the Lord has entered through her.

Significantly, the Golden Gate — the “gate called the Beautiful” (Acts 3:2) — is the site of one of the first post-Resurrection miracles worked by the apostles in the name of Jesus, the healing of a cripple who begged at that gate and whose “walking and leaping and praising God” (Acts 3:8) give expression to the Easter joy of the whole Church. The Lord who lives, who has arisen — he lives also in us. He teaches us, even now, what is necessary for peace.

Standing on the Mount of Olives, gazing through a window at the Dominus Flevit chapel, I could see and understand much more than I had known before. It was a beautiful and terrifying vision, at once as human as tears and kisses, as divine as the prophet’s vision that foresaw what has since come to pass and what remains to occur. And that twofold vision is possible because Jesus once stopped on a hill, saw the city he loved and wept over it.

Sister Ann Astell is professor and director of undergraduate studies in the Department of Theology at Notre Dame.