You can’t please all the people all of the time . . . or maybe you can.

No doubt if you’re reading this, you’ve already seen this.

The new Shamrock Series uniform, being worn by Notre Dame for one game in Chicago, in October, when the Irish play Miami.

The beauty of the “new” Notre Dame uniform is that it’s insignificantly significant. A radical costume change for one fun afternoon in October. 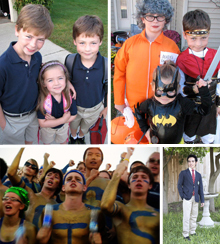 By the way, here’s a photo of my kids in their daily Catholic school uniform.

And here they are at Halloween last year.

Apparently, the 21-and-under crowd likes an occasional change of looks.

The initial Twitter reaction to the unpredictable uniform has been, well, ironically predictable. Cute, catchy one-liners of despair.

“These helmets are the most hideous thing in the history of Notre Dame, and I’m including Quasimodo.” @badbanana.

The beauty of Twitter is how easy it is to be pithy. “Notre Dame has gone from throwback uniforms to throw-up uniforms” — that one’s mine.

I just made it up five seconds ago. I didn’t tweet it. I don’t believe it. But I kinda like it.

See how easy that was.

In the Twitter world, the quote’s more important than its veracity. Make it funny, shocking, alarming, and people will re-tweet it.

Off the top of your head to the tip of your fingers. In 10 seconds you tweet and are re-tweeted. Click and trend. My twitter feed’s blowin’ up!

Twitter was launched in 2006, the same month my tiny 10-pound schnoodle Charlie was born.

Charlie is cute and fun to play with. She goes outside 8 to 10 times a day and barks, barks, barks. Gets lots of attention. Then comes inside and gets a treat. Lots of times, she’ll just go back outside for no reason, bark, and can come back inside just for a re-treat.

Twitter is not about what you believe, it’s about how clever you are in expressing an opinion. Any opinion. Especially an exaggerated one. Because Twitter thrives on initial reactions. When we’re at our most emotional and, many times, most irrational state of mind.

The Shamrock Series uniforms, and the Twitter reaction to them, show us how close the Twittersphere is, at all times, to the window ledge.

And that’s not such a bad thing.

Because for entertainment, we seek the ledge. We’re emotional creatures, looking for quick jolts of emotional rush. Fear. Anger. Laughter. Joy. Sadness. It’s why we go to the movies, ride a rollercoaster, fall in love, watch a football game.

It’s why Charlie goes outside to pee.

Twitter is an emotional release. Any kind of emotion. So when you’ve generated thousands of tweets, for something as insignificant as a three-hour wardrobe change in a 125-year theatrical journey, it’s safe to say that the Shamrock Series uniforms have entertained all of the Tweeting Irish.

Love them or hate them.

There’s little entertainment value without emotion. Who re-tweets this? “Got up, read the newspaper, ate lunch.”

WE WANT EMOTION. Give me something to laugh at, scare me, or at least in the case of social media, something I can bitch about.

So “Thank you @ND/adidas for the #Shamrock Series uniforms. They’re entertaining.”