A night after one of his famous 1980s parties, where otherwise sane people donned costumes to resemble the likes of Michael Jackson and Madonna, Robert Sedlack ’89 summoned me. Come help finish the previous night’s keg, he said. The Notre Dame professor of graphic design was with friends and family at an only-in-South-Bend bowling alley/social hall/dive bar called the Maennerchor Club, which had peaked decades ago, if then. 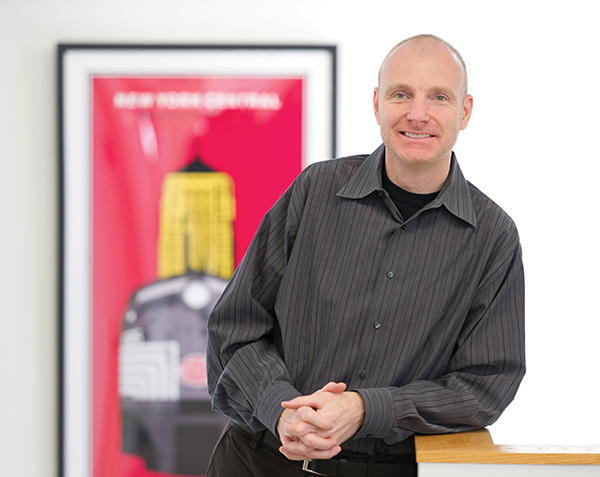 Here’s how infectious Robert’s enthusiasms could be: Not only did I go, but I also dragged along my 9-year-old daughter in her pajamas to hang out with her friend Emma, Robert’s daughter.

Robert could have that effect on people. You wanted to be a part of whatever he was concocting, and you always felt he wanted you to be a part of those plans. His great laugh and his energy were contagious. He organized parish picnics, St. Patrick’s Day parade themes and green-firetruck tailgaters. Robert was the Pied Piper, the connector, the glue guy of every group he belonged to.

He died at home on May 30 of ALS (Lou Gehrig’s Disease) at the age of 47, having taught right through his final semester this past spring.

I knew him for only six years, far less time than I wanted or that many other friends had with him. But Robert Sedlack showed me this: The best people are not the ones whose souls burn so brightly it shines a spotlight on them, but whose light bathes those nearby in its glow.

At a standing-room-only funeral Mass in the Basilica of the Sacred Heart, his Grace Hall roommate Tom Schlegel ’90 put it this way in his eulogy: “I’m more artistic, more driven, more outgoing and a better listener because of my 30 years with Robert. I can’t think of any better legacy in the world — than to make the people around you better.”

Once, when Robert, Steve Egan ’93 and I took our kids camping on the dunes by Lake Michigan, we cooked steaks on skewers over an open fire. I forgot to bring silverware or plates, but Robert turned the oversight into an adventure. We held chunks of scalded meat in our fingers, tearing it with our teeth and letting the juices flow down our chins like barbarians at the gates of Rome. The kids wondered why we laughed so hard.

Everybody has a Robert Sedlack story. It usually isn’t as good as Robert’s version, though it might adhere more closely to the facts. Schlegel said he liked Robert’s stories better than the truth, like the time Schlegel supposedly ripped up a pair of football tickets rather than sell them to an LSU fan who offered 50 cents. “After hearing his stories over and over, his stories became my memories,” Schlegel said.

Former students still shiver recalling the exacting expectations Robert had for their first project, a simple three-dimensional drawing of a cube that set the tone for his class. But his relentless energy and wide-open personality won them over. One recalled a friend saying, “I didn’t even have Robert as a professor, but I think he was my favorite professor at Notre Dame.”

Born in Greencastle, Indiana, Robert earned a bachelor of fine arts degree from Notre Dame and, in 1993, a master of fine arts degree from Indiana University. He worked for several design firms before joining the Notre Dame faculty in 1998, and he kept fresh in the field by continuing his design work through his own studio, winning national acclaim for his book designs and posters. He is the only professor of visual design to have received tenure from the University. This past year he won the Ganey Faculty Community-Based Research Award and the Sheedy Excellence in Teaching Award, the highest honor in the College of Arts and Letters.

Robert considered his teaching and writing projects to be collaborations, directing his students in courses that tackled social issues ranging from racial discrimination and gun control to xenophobia and immigrants’ rights. He told students in his Design for Social Good course that “graphic design is a culture-shaping force that has the ability to powerfully effect change.” His students regularly partnered with nonprofit organizations in South Bend as well as Haiti and South Africa.

Robert left too soon. But at least he never lost his ability to communicate or teach — two things so important to him. He was able to tell those he loved how much he loved them, and boy, did they tell him back. His parents (Bob ’59 and Ellen) and sister, his wife, Theresa, and his children, Emma and Trey, felt tremendous support from family and friends during his illness and beyond.

Robert asked his high school friends Karen Seketa and Leah Foutty to tell some of the old stories “when I am gone.” He told them: “I want you two to speak at my celebration, and I want it to be funny, I don’t want it to be sad.”

Father Tom Doyle, CSC, ’89, ’96M.Div., a classmate who celebrated Robert’s funeral Mass, spoke of how ALS did not curb Robert’s zeal for life. It was hard to watch the disease deteriorate the body of someone so competitive and athletic — he ran a 4:23 mile in high school and made the Elite Eight in Bookstore Basketball in his 40s. But after he could barely lift his arms, Robert would swing his torso in order to shake hands or hug his many friends. In true form, he organized a “Bring a Straw” pub crawl because he couldn’t hoist his own glass.

In his homily, Father Doyle talked about Robert playing interhall football, making a spectacular leaping, twisting catch for a first down. “I witnessed perfection of competition, concentration and athleticism embodied in Robert,” he said. “I had witnessed beauty. Suspend from your memory Robert’s needing to swing his trunk to raise his hands and hold onto the image of Robert outstretched and extended in the air.”